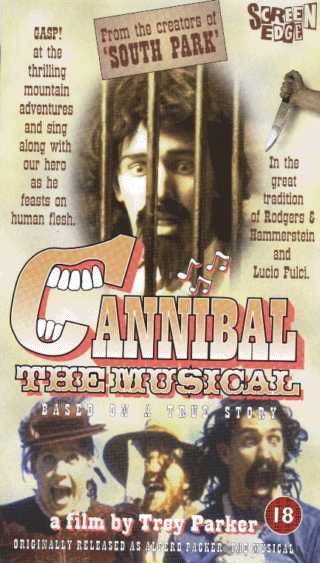 Originally posted on The Unpleasant Lair Of Spank The Monkey 09/08/1998.

This should still be available on DVD in the UK. However, I think the US special edition (now sadly out of print) has a more impressive set of features, including the drunkest commentary track ever recorded.

Cannibal The Musical will be performed at the Edinburgh Fringe by Rival Theatre Company between July 31st and August 24th, 2008. The production's MySpace suggests a West End run may follow.

If you haven't read the story yet in any newspapers or magazines over the last couple of months, then please note that eye tests are widely available on the NHS. Basically, there were these two twentysomething slacker types, Trey Parker and Matt Stone. They dabbled in a number of film and animation projects together, culminating in a five minute short called The Spirit Of Christmas. It started out as an animated Xmas card, and then gradually sneaked onto the Internet and around the world...

...but you know all that already. And in the same way that The Spirit Of Christmas ballooned into the twenty or so episodes of South Park currently in existence, another of the early Parker/Stone projects also took on a life of its own. Although as we'll see, this one is primarily Trey Parker's baby. Back in the early '90s, when Parker was studying film at Colorado University, one of the shorts he made was a three minute fake trailer for a non-existent musical about the only man in American history ever to have been convicted of cannibalism. It got such a good response that actually making the movie itself seemed like the next logical step.

Parker formed the Avenging Conscience production company with his pals Matt Stone, Jason McHugh and Ian Hardin, scrounged $75,000 from anyone he could find, and made the film using fellow students as cast and crew. The resulting film (made in 1993, released in 1996) has subsequently appeared under two different names - Alferd Packer: The Musical or Cannibal: The Musical. It's actually been available in the U.K. for the last couple of years through Screen Edge video (a small company specialising in the weirder end of indie cinema), under the Alferd Packer title. They've just re-released it to cash in on the current South Park mania, with a redesigned cover that now calls it Cannibal: The Musical... but the title on the actual film itself still says Alferd Packer. To save confusion, let's just call it Cannibal: The Musical from now on, as that's what you'll have to ask for in a shop if you want to buy it. And you will. 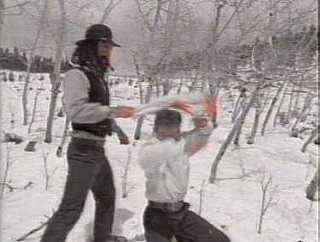 It'd be easy to get the wrong idea about Cannibal from the opening scene: a blood-spurting, neck-snapping, jaw-dislocating, to-death-with-the-soggy-end-of-a-severed-arm-beating massacre where the crazed Alferd Packer (played by Trey Parker himself under the pseudonym Juan Schwartz) kills five men in a snowy landscape. In fact, all this is just a gruesome interpretation of events put forward by the prosecutor at Alferd's trial. Several years earlier (in 1874), Alferd had led a party of six into Colorado territory in search of gold: he returned alone, and all that was eventually found of the other five were the half-eaten remains of their bodies. People obviously suspect the worst.

As Packer waits in his cell for the verdict, he's interviewed by journalist Polly Pry (Toddy Walters), who suspects Alferd is holding back on the true story. Eventually he tells her about the ill-fated mining party that he led into the Rockies. There was the God-fearing Mormon Shannon Bell (Ian Hardin), the unnecessarily cheerful Israel Swan (Jon Hegel), the unnecessarily grumpy Frank Miller (Jason McHugh), the young and horny George Noon (Dain Bachar), the frankly stupid James Humphery (Matt Stone), and their guide Lucky Larry. Unfortunately, Lucky Larry is struck by lightning the day before the expedition, and Alferd is brought along as guide because of his experience of the territory.

It soon becomes painfully obvious that Alferd doesn't know his way round Colorado at all, and as they blunder through the territory things just get worse and worse. They cross swords with a band of evil trappers, who apparently steal Packer's beloved horse, Lianne. Shannon Bell nearly loses a leg in a bear trap. They meet a band of Red Indians (well, not exactly red...), and while on their reservation meet up with the trappers again. Alferd takes the party miles out of their way to follow the trappers and retrieve his horse, and they end up hopelessly lost in the snowy wastes of the Rockies.

Cold, tired, forced to eat their own shoes for sustenance, events come to a head when one of the party dies in a tragic incident involving a snowman. Finally, Alferd tells of the horrific events that led from this to the death of everyone except him. Should Polly believe him? Can his true story be made public in time to save him from the gallows? Is it a bad sign that the final song in the film's called Hang The Bastard? 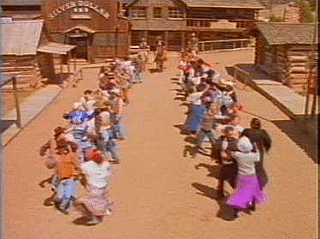 Ah, yes, the songs. Well, they don't call it Cannibal: The Musical for nothing. Not content with writing, directing, starring and doing a whole pile of other minor jobs on the film, Trey Parker also wrote all the songs (except for one he wrote in collaboration with Rich Sanders). Before getting into film, Parker studied music, and the seeds of subsequent classic South Park songs like Kyle's Mom Is A Stupid Bitch In D Minor can be seen here. Rather than go for the easy approach of just writing a whole series of songs on the subject of the consumption of human flesh, Parker treats Cannibal like it was a proper Hollywood or Broadway musical, taking the standard cliches and twisting them just a little. So when we first see Packer in flashback, he's singing about how good his life is in an Oh What A Beautiful Morning kind of way, except the actual words he's singing are total bollocks: "The sky is blue, and all the leaves are green / My heart's as full as a baked potato / I think I know exactly what I mean / When I say it's a shpadoinkle day!"

Parker's musical training shows through at several points in the film, notably during the trappers' song, which is interrupted towards the end as they get into a big argument over whether E flat is the relative minor of F sharp or not. And underneath the jokes, these are terrific songs: Polly Pry's number, This Side Of Me, could almost be a proper showtune if it wasn't for an exquisite visual gag about the way songs like this are usually staged, and a penultimate line that doesn't really fit in with the rest of the song at all. Meanwhile, Packer's big show-stopping love song could be an absolute smash if you didn't listen to the words properly, and didn't realise he was singing it about his lost horse (the splendidly titled When I Was On Top Of You).

Cannibal: The Musical is still very obviously a first feature film. Some of it (notably in the early scenes) is a tad slow, the sound mix is a bit flaky in parts, and a couple of the gags just fall flat on their arse. But the sheer quality of the songs pulls it way above any other student film you've ever seen, the gags that do work work brilliantly, and there's obvious historical interest in watching out for ideas that Parker recycled later on for South Park (at the end of the film, someone actually says "I've learned something today..."). And the final caption at the end of the closing credits is so perfect I'd pay £12-99 just for that. Being a monkey, and all.

The Internet Movie Database is smart enough to know that Cannibal: The Musical and Alferd Packer: The Musical are the same thing. Details of Trey Parker's career to date are on there too.

Screen Edge video, who've released Cannibal in the U.K., have a nice official site [dead link] including links to other Alferd Packer sites. He really existed, you know. He just didn't sing that much.

Certified Renegade American Product [dead link] (CRAP for short) run the US official Cannibal site [dead link], which includes a lengthy piece by Jason McHugh on the making of the movie. [The official site now appears to be cannibalthemusical.net.]

Wedgie's World [dead link] has an unofficial Cannibal site [dead link] along the lines of the numerous South Park ones, with lots of downloadable clips and news.