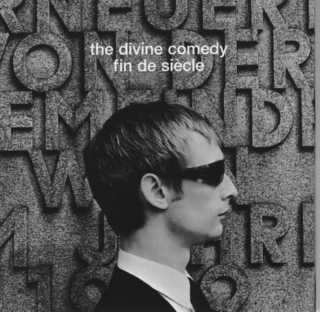 Originally posted on The Unpleasant Lair Of Spank The Monkey 02/10/1998.

As foretold in prophecy, The Divine Comedy moved to a major label - Parlophone, as it happens - and sank all their cash into their first major release, Regeneration (2001). Which kinda flopped. Neil Hannon split up the band, went away for a few years to think things over, and then made a couple of comebacks with Absent Friends (2004) and Victory For The Common Muse (2006). Both of which also kinda flopped. Neil Hannon is currently between labels, which is rather a shame, but I'm sure he'll bounce back.

In other music news, Rob G has left the Crouch End Festival Chorus citing 'musical differences'. Or something.

Without wishing to boast, it's a shame that you probably weren't at the invitation-only midnight gig that the Divine Comedy did the day before the release of their latest record, Fin de Siècle. Because I was. Organised by Time Out magazine as the prize for one of their write-in offers, I got back from a crazed week at the Edinburgh Festival only to find one of 200 pairs of tickets sitting on my doormat, positively demanding my presence at London's Virgin Megastore a mere 24 hours later.

So after a day spent catching up on sleep and finishing off the Edinburgh diary, myself and my mate Jon went off to the gig. An hour late because of an earlier appearance at the Reading Festival and a subsequent online chat for Virgin, Neil Hannon and the boys walked onto the tiny stage around 11:30pm. Neil introduced the set with "We're just gonna do the album, okay?", and then they proceeded to tear into nine of the ten songs on the new album, which was due to go on sale for the first time immediately after the show (the band promising to stay behind and sign copies for us).

The obvious thing to point out about this gig is that the Divine Comedy performed as a seven piece band (plus two guest vocalists), and still managed to do justice to all the songs from Fin de Siècle. Which is astonishing, as the record itself has over one hundred musicians on it. Since the early days of the Liberation album, where the band was basically Neil Hannon plus a few session musicians, Hannon's continually experimented with building his sound with orchestral instruments. 1997's A Short Album About Love (and the subsequent tour with the thirty-piece Brunel Ensemble) seemed to be the apogee of this approach, but on Fin de Siècle he takes it further by combining the Brunel Ensemble with the Crouch End Festival Chorus on backing vocals. 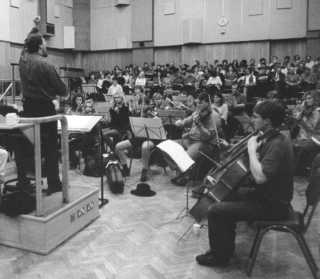 Here an interest must be declared. If you were following Spank's Edinburgh Diaries, then you'll be aware of Spank's Pals, the motley crew I shared a flat with for a week. One of them was Rob G, who positively demanded to be referred to throughout the diary as "effete Londoner Rob G" as he thought it would get him a cult following. (No signs of it yet, but there's plenty of time.) When he's not in Edinburgh being effete, he spends his spare time singing bass with the Crouch End Festival Chorus, one of London's top choirs. They perform in London four or five times a year and have released a number of top-selling albums (their choral adaptations of film music top the American classical charts regularly). And now thanks to the Divine Comedy hiring them for this record, someone I went on holiday with is singing on a current top 10 album. What's going on? In a WORLD EXCLUSIVE interview, I asked him. (Mr. G's lawyers have asked me to point out that the opinions expressed here are personal, and are not necessarily those of the Crouch End Festival Chorus.)

Spank: How did you get involved with the Divine Comedy in the first place?
Rob: We first worked with Joby Talbot [keyboardist and arranger for the Divine Comedy] on his 1997 piece Finding Silence, a setting of poems by Tanya Gupta, for soprano, orchestra, choir and lots of percussion. All concerned were eager for further projects together!

Spank: What are the songs you appear on?
Rob: On six of them, notably on Thrillseeker, Sweden and Here Comes The Flood.

Spank: What's your favourite and why?
Rob: Here Comes the Flood. Why? Well, tremendous rhythm, and a spectacular build up to the finale of screaming chaos.

Spank: Any exciting gossip from the recording session? Did you get to meet Neil Hannon or anyone like that?
Rob: A special day down by the Thames at Barnes, good cappuccino, and Neil Hannon was exquisitely polite. I'd love to continue to work with these talented people.

Spank: Any plans to tour with the band?
Rob: There has been much speculation, but for myself, I'm busy holding down a day job, so a world tour is out of the question. You will catch some of us at the London gigs, so keep your eyes and ears open.

Spank: You just mean you'll be standing near me in the audience at the Shepherds Bush Empire show, don't you?
Rob: Well, yes.

Spank: And tell them Spank sent you. (That'll confuse the box office.) Thanks, Rob. 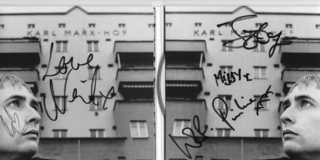 But what do I think about it? Well...

Generation Sex is a great opener, one of those perfect three-minute pop epics that Neil Hannon pulls out of the bag once in a while. Recently on Jo Whiley's Channel 4 show, Hannon was jeered at by the other panellists for daring to suggest that Aqua's Barbie Girl was a classic pop song: but you know that he understands how difficult it is to write a song like that which achieves everything it sets out to do, and you can feel his satisfaction when he pulls it off himself with something as lovely as Becoming More Like Alfie or Generation Sex. An archly clever lyric falling over itself to fit in as many rhymes as possible ("Generation Sex injects / the sperm of worms / into the eggs of fieldmice / so you can look real nice / for the boys"), alongside a charming tune and a lengthy orchestra and guitar coda, all in a little over three minutes, it's an obvious first single.

There are a number of other classic Hannon pop songs on the record - the bouncy English road song National Express, the unrequited heartbreak of Commuter Love that even manages to transcend a Genesis-esque guitar solo, and so on. But it's when Hannon stretches beyond that that things get really interesting. The Broadway swing of Here Comes The Flood is familiar territory, but there's a terrific contrast between the millennial doom of the lyrics and the sheer glee with which Hannon and the Crouch End Festival Chorus attack them. The CEFC also feature heavily on the gloriously bombastic Sweden, warbling their heads off as Hannon yearns to visit the land of Ibsen and Bergman. And The Certainty Of Chance - one of two songs co-written with Joby Talbot - has a beautiful extended orchestral coda which seems to suggest a future career in film scoring for them both.

But it's the other Hannon/Talbot collaboration, Eric The Gardener, which is the standout: probably the best song ever written about the decline and fall of the Roman Empire (and they can quote me on that). Over a looped piano phrase, Hannon tells of how the Roman invaders were slowly worn down by the British weather ("Julius Caesar came / Saw, conquered, went away / 'Cause it rained here all the time"), leaving only a handful of relics to be discovered by gardeners several centuries later. Half the eight-minute duration of the song is taken up with yet another of those extended codas, where the piano loop, the orchestra, electronic whooshes and an understated rhythmic pulse combine to produce something like a posh version of ambient house. It's a totally unexpected direction for the band, and you start thinking that someone like Daft Punk could remix this and turn it into a club hit. Then you realise virtually the whole song's in 5/4 time and today's pop kids would probably break their ankles trying to dance to it. And yet it doesn't sound like a bunch of musoes trying to be clever: it sounds like the most natural thing in the world.

Is it the end of an era for the Divine Comedy, as the title indicates? In several ways, yes. Hannon's sleeve notes refer to the impending end of the century, and the final song Sunrise is a passionate hymn of hope for the changes in his homeland of Northern Ireland. And on top of all that, this is the last album under the band's contract with indie label Setanta Records, and major record companies will presumably be fighting in the streets to pick up the rights to release the next one. As they should, when a band's as good as this right now and still showing signs that they haven't really got started yet. It's only to be hoped that Hannon's love of classic pop and Talbot's desire to experiment aren't crushed by the corporate machine.

"I hope that your love of classic pop and Talbot's desire to experiment aren't crushed by the corporate machine," I said to Neil as he signed my copy of Fin de Siècle after the gig. Not that he'll pay any attention to me. Being a monkey, and all.

Indulgence is an unofficial Divine Comedy site. As above, plus some audio/visual gubbins to clog up your Internet connection with, and the occasional surprise.

Festive Road [dead link] is unofficial as well. Too! Much! Bloody! Java! But quite nifty otherwise, including oddities such as a downloadable cover version of the DC classic Your Daddy's Car by Australian band The Whitlams.

The Divine Online is another one. Charmingly amateurish navigation buttons and an online vote for your favourite Divine Comedy song.

Rathmines [dead link], ditto. A bit short on regular updates, but the biography does describe Neil Hannon as "a fun-size 27 year old Celt", and the artwork's nice.

Setanta Records are plugging the band while there's still time. (Last updated January 31st, 1998. Oops.) [Okay, it's been updated since then.]

The Crouch End Festival Chorus have a home page, but are probably too busy singing to put anything on it, so we'll let them off. Just go and see them do Elgar's The Kingdom at All Hallows' Church, London NW3 on October 17th and 18th 1998 instead. Assuming you're reading this before then, of course. [Which you're not. And the CEFC website has improved dramatically since 1998.]