Home Archives/Categories About Me RSS Feed Mailing List Email
REPOST: The Talk Of The Town
REPOST: Cannibal The Musical 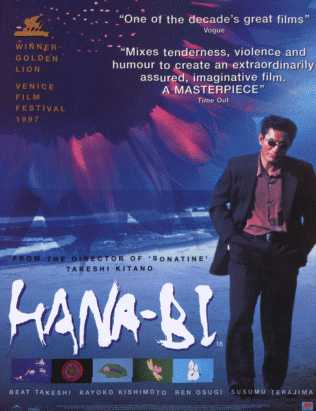 Originally posted on The Unpleasant Lair Of Spank The Monkey 27/07/1998.

In the last ten years, Takeshi's career has seen the highs of Kikujiro and Zatoichi, followed by the lows of Takeshis' and Glory To The Filmmaker! I'd like to think he's still got a great film or two left in him.

I was going through my John Woo phase when I saw my first Takeshi Kitano movie back in 1993. (Strictly speaking, I'm still going through my John Woo phase, except nowadays it involves buttonholing people as they come out of Face/Off and screaming "TOLD YOU SO! TOLD YOU SO!") Anyway, back then I was telling everyone who'd listen about the Scala cinema in London's King's Cross (now sadly defunct), explaining how they were doing these all-day screenings of Hong Kong movies, and they weren't all chopsocky kung fu and Jackie Chan - there was a whole genre involving directors like Woo and Ringo Lam, and stars like Chow Yun-Fat, looking at Triad gangs and the internal loyalties and morality within them: all with a body count that usually ended up in the low hundreds and most, if not all, of the lead characters dead by the finale.

So when Sonatine was screened at the 1993 London Film Festival, the idea of Takeshi Kitano sounded appealing: here was a Japanese actor/writer/director who was making movies that took the ideas of the old Yakuza flicks of the '60s into the present day, rather like Woo was doing with the Triad films. Had to be worth a look. And it was, but not for the reasons I was expecting. Yes, the violence was there, but filmed with an attention to detail and imagination that was staggering: sure, John Woo had staged shootouts involving eight people in his films, but he didn't have the balls to film one in an eight person lift like this guy did. Then there was the gloriously deadpan surreal humour, the quirky characters, the way the plot sort of ground to a halt halfway through while the main participants in the story went off to the seaside and goofed around... If any racially insensitive fool ever tells you they can't tell the Chinese and Japanese apart, a double bill of Woo's The Killer and Takeshi's Sonatine should sort them out once and for all. (Reading that last sentence back, I've just realised that in a cack-handed attempt to establish my anti-racist credentials, I think I may have implied that the Chinese and Japanese can primarily be distinguished by the way they kill people in movies. Can I try and rephrase that one again later?)

Sonatine came out, did the business in the arthouses, even made it into the BBC's list of the top 100 films of all time a couple of years later. On the back of that, earlier films like Boiling Point and Violent Cop got their first release here. We also got to find out more about Takeshi Kitano himself: he started off as a stand-up comic called "Beat" Takeshi (the name he still used when acting), and he'd appeared in a few films before starting as a director, most notably Merry Christmas Mr Lawrence. Hordes of newly-created British fans devoured all this, and waited with bated breath to see what he would do next.

Unfortunately, what he did next was fall off a motorcycle and spend a month in hospital close to death. For a while, it looked like we may never see another Takeshi film. It didn't help that the first film he made after his recovery - Getting Any? - was a total mess, a sex comedy which culminated in a parody of The Fly where the creature is finally trapped and killed thanks to the use of a thirty-foot fly swatter and a football stadium full of shit. Last year's Kids Return was something of a return to form, only slightly marred by the fact that Takeshi didn't act in it as he didn't feel ready to come back in a leading role yet. So now we have Hana-Bi... and boy, he's ready now.

To get the title out of the way first: hanabi is the Japanese for 'fireworks', but the hyphen in the middle divides it into its constituent words hana (flowers) and bi (fire). All three elements play their part in the story. "Beat" Takeshi plays Yoshitaka Nishi, a borderline psychopathic cop - Takeshi's lead character of choice tends to be either a very violent cop or a very violent gangster. It emphasises another difference between the Hong Kong approach and the Japanese one. Whereas in Hong Kong action movies the lead character is normally infinitely heroic and capable, battling against unfeasible odds for what he believes is right, Takeshi's characters are generally slightly incompetent thugs, ultimately only driven by the desire to tidy up the mess they've made from their own screw-ups, before facing their own inevitable doom.

Nishi fits the template perfectly. He's already suffering from personal tragedy when we first meet him: his daughter died a few years earlier, and his wife has terminal cancer. His closest colleague Horibe (Ren Osugi) is crippled during a stakeout, and Nishi feels responsible as Horibe was covering for him while he visited his wife in hospital. While pursuing the shooter, another of his colleagues is killed. He leaves the police after this, and soon ends up in trouble with loan sharks demanding payment. What can he do to put things right? Rob a bank?

A bald statement of the story doesn't begin to describe the many pleasures of Hana-Bi. As well as writing, directing and acting, Takeshi also edits his films, and he does it with a sense of timing that makes you wish you'd seen him as a stand-up comic. The violent scenes particularly gain from this: in some cases he cuts straight from the buildup of conflict to the aftermath, in others the violence is all conveyed in reaction shots. But when he wants to hit you with the impact of a scene (notably in the shootout that leads to Nishi's departure from the police), he doesn't pull any punches whatsoever. And even then this key scene is built up to as a series of tiny flashbacks, eventually expanding into a full length depiction of the action.

And Takeshi's skill in editing also pays off in the lighter moments - in case I've made Hana-Bi sound like some sort of gigantic bulletfest, I think it's only fair to point out that ultimately it's about Nishi's relationship with his wife Miyuki (Kayoko Kishimoto). As they head off on a second honeymoon on the proceeds of his bank robbery, they do card tricks, light fireworks, go sightseeing, anything to take Miyuki's mind off her disease. But meanwhile, both the police and the loan sharks are on Nishi's trail... 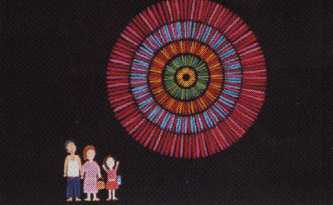 Intercut with all this is the story of Horibe, confined to a wheelchair since the shooting. Deserted by his wife and child, he tries to commit suicide, but fails. Nishi encourages him to take up painting, buying him art materials and (a typical Takeshi touch) a beret. Horibe's paintings are seen frequently throughout the film, and they show us his progress as he comes to terms with his state, and also comment obliquely on Nishi's story - and Takeshi's, too, as he did the paintings (is there anything this man can't do?) while convalescing after his own near-fatal injury in 1994. The autobiographical parallels are there if you want them.

All this, and a host of extraordinary supporting characters - a junkyard owner, two punks first seen eating sushi while sat on the bonnet of Nishi's car (uh-oh...), an old man taking his grandson to a temple, a little girl with a kite - who all play minor parts in the story but remain totally memorable... and a lush score from regular collaborator Joe Hisaishi... and as an antidote to all those movies featuring a gang screwing up a bank robbery through their mutual incompatibility, a cracking scene where one bloke walks into a bank and robs it perfectly...

Foreign cinema gets a raw deal in Britain these days, but if you try hard enough you should be able to see this film somewhere. It opened in London at the end of July, and hopefully should make its way round the rest of the country in time. Make the effort to see it, and maybe you'll start going through a Takeshi Kitano phase too. After all, a John Woo phase is all well and good, but I can't keep wearing this long coat and chewing on a matchstick forever. Being a monkey, and all.

The Internet Movie Database has info on Hana-Bi, and Takeshi Kitano, and trillions of other things besides.

Office Kitano is the official site of Takeshi's production company: it has comprehensive details of all his films, as well as profiles of the other artists and comedians on their books.

The Unofficial Takeshi Kitano Homepage [dead link] does exactly what it says on the hyperlink. One of those touching labours of love that you find on the net now and again.

Easy girls? How about crazy ones?

Is it possible to have king kong jumping around and surviving his
various crash landings? Why not? Please explain this in terms of
atomic physics using natural units (planck units). An answer might
discuss the force of the impact of King Kong (use approximate
equations) and the chemical bonds in his bones. Ignore factors of 2,
pi, and such pesty constants.