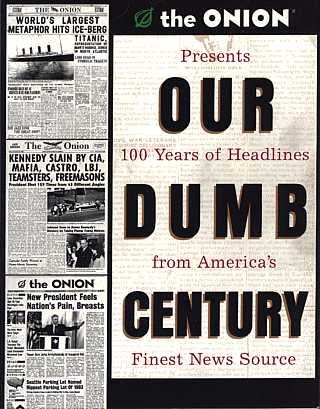 Originally posted on The Unpleasant Lair Of Spank The Monkey 19/07/1999.

The Onion continues to thrive, of course, via its website, its paper edition, and a series of books compiling old material (which curiously ground to a halt in 2006). Last year, its all-new atlas Our Dumb World did for geography what Our Dumb Century did for history, only not quite as well.

As I may have mentioned previously, when I'm not being the Internet's leading australopithecine arts critic, I have a moderately responsible job in the computer industry. It therefore goes without saying that I share an office with a large number of male science fiction fans. So when I discovered the following news item a few weeks ago, I felt it was my duty to share it with my colleagues.

LOS ANGELES--Twenty-five years after its 1974 debut, the science-fiction program Space: 1999 is returning to the airwaves this fall with the two-hour NBC movie Space: 1999 '99: Back To The Moonbase. "Martin Landau, Barbara Bain and all your other favorites are getting back together for more thrilling outer-space adventures in the mysterious futureworld of 1999," NBC spokesperson Lisette Harris said Tuesday.

The reaction was priceless. Initial excitement at the prospect of the series' return gave way to confusion as the implications sank in. Ultimately it was Patrick who twigged what was going on.

You never forget your first Onion article: you tend to go through the same cycle of emotions described above, reaching some sort of orgasmic peak of enlightenment when you finally realise it's all a windup. Styling itself as America's Finest News Source, The Onion has been deceiving the gullible for a number of years now. As a small circulation tabloid newspaper, it had a respectable cult following for a while: but it wasn't until they took the brave step of putting virtually all their humour content on their web site every week that it acquired a global audience.

So editor Scott Dikkers and his team of writers are philanthropically increasing the sum total of human happiness in the world, which can only be a good thing. But let's be frank, it doesn't pay the bills: the income from a spottily distributed tabloid and the web site's ad revenue probably don't add up to much dough. Happily, we now have an excuse to give these people the money they deserve, as they publish their first book, Our Dumb Century: 100 Years Of Headlines From America's Finest News Source. It's been available in the US since Easter, and a British edition is finally published by Boxtree in July 1999, priced £9.99. 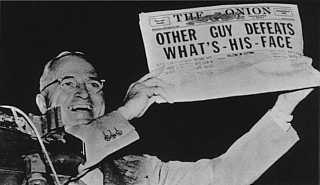 Our Dumb Century's premise is ludicrously simple: it consists of around 150 facsimile front pages of The Onion, covering the history of the whole of the 20th century in their own unique style. It's a slight departure from the paper's usual angle, as they tend to avoid topical jokes, generally working instead in the area of social satire, which of course has a much longer shelf life. Here they get the best possible combination: topical humour written with the benefit of up to 100 years of hindsight.

As reported by The Onion, things were looking bright for America at the beginning of the 20th century. The dawning of the Coal Age showed the way forward for industry, and the nation's blackened skies testified to its manufacturing superiority. ("Fair England, great colonial power that she may be, possesses the clear blue sky of an industrial weakling.") The Wright Brothers were on the verge of inventing the aeroplane, a discovery that led President Roosevelt to propose an American expedition to Heaven within twelve months. Science was progressing to the extent that machines were rapidly replacing China-men for most menial tasks. ("They do not require work breaks, they do not need to be paid, and they do not bleed on the floor when beaten.") Apart from the occasional unpleasantness in which the swarthy, potato-stained hand of the Immigrant could be detected, life was good.

Things couldn't last, of course. A bloody and rather confusing war in Europe ("Ottoman Empire Almost Declares War On Itself: Nations Struggle To Remember Allies") was closely followed by a crippling Depression ("Evil, Bloated Plutocrats Losing Favor With Some Americans"). President Roosevelt tried to pull the nation together with inspiring speeches and a plan to create 300,000 jobs by building a tunnel to New Zealand. With such pressing matters back home, The Onion only found time occasionally to report on developments in Europe ("Chaplinesque Rapscallion New Leader Of Germany's National Socialist Party"), but when war broke out again in 1939 they were ready to impartially report on the struggling nations across the Atlantic. ("French Surrender After Valiant Ten Minute Struggle: Hungary Seeks Safety With Stalin: U.S. Generals Enjoying Wizard Of Oz.")

Post-War, America was back on top again. ("War Over! 50 Years Of Nuclear Paranoia Begin Today. Returning GIs Vow To Spawn Whiniest Generation Ever.") As national levels of swellness grew to an unprecedented peak, fear of the Communist threat grew along with it, and The Onion was there to reveal the hand of the Bolshevik in such alien activities as Heavy Petting, Book Reading and Space Travel. But in the Sixties an even more sinister movement began to take hold. It manifested itself in 28-year-long songs by the Grateful Dead, epidemics of Beatlenemia and a festival at Woodstock featuring 65 musical acts and 65,000 sex acts. The movement turned sour and died at the tail end of the decade with the grisly murder of Sharon Tate and four others at the hands of the evil 'Partridge Family' cult.

Things were never the same after that. America lost confidence in itself, conceding defeat in Vietnam ("Ford Urges All Americans To Salute Our Vietcong Rulers") and losing faith in its leaders ("Reagan May Have Been Elected, Doesn't Recall"). It's possible to see The Onion going through a dumbing-down process during the final years documented in this book, as the news stories become more trivial: its entire coverage of the Tiananmen Square massacre consists of the classic picture of a lone student standing off against the troops, and the caption "Stirring Symbol Of Human Spirit Difficult To Clean Out Of Tank Tracks". In a numerically satisfying but curiously prescient finale, the book ends with the front page for January 1st 2000 ("Christian Right Ascends To Heaven"). 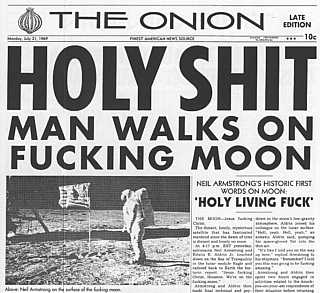 The first thing that hits you about Our Dumb Century is the sheer attention to detail. The design by Scott K. Templeton and Andrew Welyczko is magnificent: they've obviously studied the layout of newspapers from the whole century and subtly altered the design of The Onion throughout the book, from the almost unreadable solid blocks of text used in 1900 to the USA Today style news bites of 100 years later. If you resist the urge to just dip in at random, but read it chronologically, you'll pick up some delicious running gags, like the endless succession of editorial cartoons featuring the Statue of Liberty being raped by the social menace of the day (be it Germany, Russia or Lounge Lizards).

For what's effectively a big dumb funny book that'll probably end up in a lot of people's toilets, it's surprisingly smart. You need a fairly solid grasp on modern history and culture to pick up all the jokes in here: one surprising bonus of the book is that you'll get a much better sense of the key events of the century than you would from a conventional history text. Some of the media references are wildly obscure, and a couple are wholly impenetrable to non-American readers ("McDonalds Driven Out Of Business By Burger King's Devastating New 'I'm Not Herb' Campaign." Huh?), but there'll always be a more comprehensible joke following on just behind it.

And ultimately, that's the key selling point of Our Dumb Century: the jokes. Dozens of them per page. Big ones, small ones, cheap ones, intellectual ones, all falling over each other to make you squirt milk out of your nose, whether you're drinking it at the time or not. You probably think I've given away all the best ones in this review, but I've barely scratched the surface. Buy this book today, and I can promise you'll laugh till you shit. And I should know. Being a monkey, and all.

The Onion's official site has four weeks' worth of funny bits from the paper (updated each Wednesday), an archive of all their best articles, some nice arts reviews in their AV Club section, and an on-line merchandise shop selling subscriptions, gifts and (naturally) Our Dumb Century. It makes all other links in this section redundant, but I'll press on anyway.

Amazon.com will sell you the US edition of the book online, while amazon.co.uk will supply the UK edition: take your pick according to currency and location. Although as ever, Amazon.com is better if you want to read reviews by idiot readers who don't get the joke.

The Weekly is a fledgling attempt at producing a British equivalent of The Onion. It's still got a long way to go, but some features like the delirious list of Further Excellent Purchases show some promise.

The Landover Baptist is probably the only site that can beat The Onion at its own game. An incredibly detailed parody of an extremist Baptist church's on-line newsletter, it achieved notoriety recently by trying to start a moral panic based on the alleged abuse of Jar Jar Binks dolls. The proof of the pudding is in their guestbook - a combination of hate mail from people it's taking the piss out of, and hate mail from people who think it's all genuine. You couldn't ask for a better response, could you?