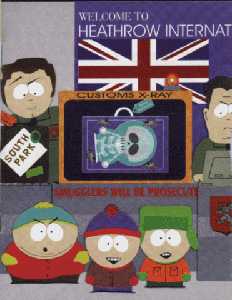 Originally posted on The Unpleasant Lair Of Spank The Monkey 18/07/1998.

Bugger me, this is terrible, isn't it? It's not like I was particularly ahead of the curve on this one: the article originally coincided with the terrestrial airing of season 1, long after it had premiered on Sky One, and partway through the screening of season two on Comedy Central in the US. If I'd written about South Park back when the only way you could see it in the UK was via dodgy internet copies, it might have made more sense. Still, even though it's totally lacking in any sort of original insight, here's the piece anyway.

Meanwhile, of course, South Park is still going, currently into its twelfth season on Comedy Central. As far as UK transmission goes, both Sky and Channel 4 gave up on the show years ago, but Paramount Comedy Channel have been reasonably good at picking it up in their absence. DVD sets are widely available, as are those dodgy internet copies.

If you haven't read the story yet in any newspapers or magazines over the last couple of months, then please note that eye tests are widely available on the NHS. Basically, there were these two twentysomething slacker types, Trey Parker and Matt Stone. They dabbled in a number of film and animation projects together, culminating in a five minute short called The Spirit Of Christmas. It started out as an animated Xmas card, and then gradually sneaked onto the Internet and around the world. Which is where I came in.

It's hard to express the sheer joy felt when you come across something like The Spirit Of Christmas before any of your friends do. The story of four kids who witness a kick-ass kung fu fight between Jesus Christ and Santa Claus as they argue over the true meaning of Xmas, the closest comparison I can come up with is the first issue of Viz you ever read. Visually, it reminds you of all the cheap tacky cartoons you saw as a kid: which makes it doubly shocking when you start paying attention to the content...

Well, you get the idea. Some people from Comedy Central saw the film and, disturbingly, offered Parker and Stone the chance to do a TV series based on it. They kept the four kids - "normal" Stan, Jewish Kyle, fat Cartman and frequently killed Kenny - and created a whole set of increasingly demented adventures around them, naming the show after the place in Colorado where it all happened... South Park. 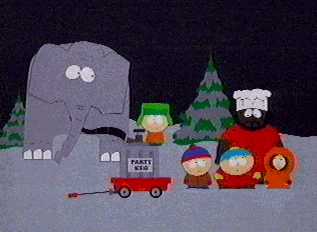 In an age where American television is so desperately bland and lowest common denominator that something as naff as Friends is considered state of the art, South Park isn't so much a breath of fresh air as a huge wet fart in the face of American culture. And yet, it's a very American form of outrage. Even with a huge TV-MA rating attached (prohibiting it to under 17s), any swear word from "shit" upwards has to be bleeped. Parker and Stone have played with this restriction to tremendous effect (notably in the first episode, where Kyle emits a magnificent rant that is 85% bleeping), but it does illustrate how South Park is a purely American phenomenon: in the UK, the sort of behaviour depicted wouldn't turn a hair post-watershed.

These restrictions aside, it's easy to see why South Park has gathered the following it has. It stomps over the boundaries of good taste, but still has a soggy wet liberal heart at the centre. (If they really wanted to cause trouble, the episode on gun control - "Volcano" - would have eventually concluded that guns were a good thing.) It confirms everything we always knew about eight-year-old kids: that at heart they're cold-hearted fascists with a capacity for cruelty beyond anything adults can imagine.

And it's funny as hell. Kids may be sneaking a look at South Park for the cute pictures and the (minor league) swearing, but the twenty- and thirty-something audience are the only ones who must really be appreciating the gags. The cultural references are all over the shop; Robert Smith of the Cure attacking the Mecha Godzilla version of Barbra Streisand: a dangerous bus ride where one of the kids on board is unfamiliar and wearing one of those Star Trek red jerseys, so we know he's gonna die: and the fact that the South Parkers' best adult friend is the school Chef, voiced by Isaac Hayes, who does a full-blown raunchy lurrrve song every week, even when the situation doesn't call for it. "You! And me! And HER!! Simultaneous lovin' , baby!" 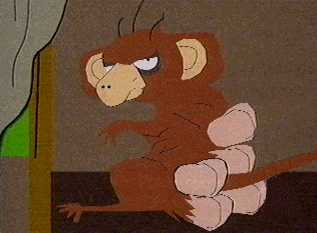 Ultimately, it's the Internet that's given South Park its unique life. Not just for the fan sites - and there's over 150 of those at the last count - but also because Comedy Central's lax approach to copyright means that within 48 hours of any episode being broadcast on TV, bootleg copies are flying around the Internet for free download. It can only be assumed that having realised that Net downloads of The Spirit Of Christmas are what made South Park popular, they feel the same should apply to the TV show. And it works: show anybody a scratchy Real Video version of an episode, and the first thing they'll ask is where and when they can see it on a proper telly.

Series Two of South Park is currently running on TV in the US, and it's all available for download - see below. In the UK, Series One has just finished on Sky and is currently showing Friday nights on Channel 4. Sure, in a year or two's time, Parker and Stone will get bored with it (they're already doing more film work, notably starring in David Zucker's Baseketball and making their own kung fu porno movie, Orgazmo). It'll get stale, repetitive, and unfunny, and will eventually grind to a halt a season or two too late. But for now, South Park is funnier than a barrel full of five-assed monkeys. And I should know. Being a monkey, and all.

Beef-cake.com is the ultimate South Park site, crammed full of downloadable sounds and images. If anything of any interest has ever happened in a South Park episode, you'll see and hear it here. [Dead link. Probably the best South Park site these days is South Park Studios, run by the people who actually make the show.]

The South Park Real Video Search Engine is the place for those full episode downloads - generally 15Mb or so for a half hour episode. Links to dozens of mirror sites. [Dead link. Mr Twig is the most reliable place to go for downloads, in a variety of formats - even those monstrously compressed Real Video files that were the only sensible way to watch the show over a dialup link back in 1998.]

Comedy Central is the true home of South Park and its official site. [Amazingly, this still works.]

Macromedia Shockrave is the place to go (if you have a sufficiently whizzy Internet link) for some splendid Shockwave versions of clips and games from the show, and a bulletin board with the occasional hysterically po-faced comment. ("I am not pro-censorship in any way. I would like to say however, that it's a sad day for the net and Macromedia that somehow an elephant sodomizing a pig is considered funny or worthwhile.") [Dead link. You'll have to go elsewhere for your pig sodomy.]

The Spirit Of Christmas Official Distribution Site has that initial short in a variety of formats. Go for the 7MB QuickTime version if you haven't got bandwidth to burn. [Dead link. YouTube to the rescue!]