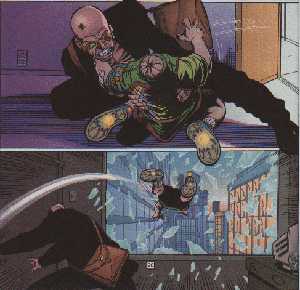 Originally posted on The Unpleasant Lair Of Spank The Monkey 14/07/1998.

Technically, this was the first thing I ever published there. There was a second piece which went up at the same time - the South Park review - but I reworked that one a few days later and changed the posting date. Even after that reworking, it's still really badly written, so I'm happy to accept Transmetropolitan as the place where it all started.

Transmet eventually ran to sixty issues, all of which have been collected into ten trade paperbacks, plus a book of illustrated text pieces (Tales Of Human Waste). See Amazon links below.

Spider Jerusalem, gonzo journalist of the future, has walked into his editor's office only to be confronted with a small headless child claiming to be his son. Without hesitation, Spider picks up the boy and hurls him through the window. The child explodes. The following exchange of dialogue takes place.

Editor: "Oh, my God... All right, let me say right now that with your history of drug abuse, it was conceivable that you could produce a child with no head..."

Spider: "French Secret Service assassination device. They sicced it on me just after the War of Verbals. It followed me for a couple of years. I thought lopping its head off in St. Lucia had finished it. I even let Mad Georgiou from down the road fuck it in the stump-circuits before we dumped it at sea. Fucking accident and consequence. None of this was my fault, you know..."

Golly, I love this comic.

It wasn't the most obvious collaboration you could think of. Warren Ellis, writer of a number of slightly culty comic books like Stormwatch. Darick Robertson, fairly mainstream comic artist whose previous career best was a run on Spiderman, for God's sake. But together they've produced the third-best comic book for grown-ups out there today. (If you already know Transmetropolitan, you'll probably know what the other two are. If you don't, wait a couple of months and I'll tell you about those as well.)

The premise of Transmetropolitan is blindingly simple. It's the future: we don't know when, exactly. Spider Jerusalem, a journalist combining all the best qualities of Hunter S. Thompson, Doonesbury's Uncle Duke and the hardest meanest bastard that you personally know, has been in retirement up a mountain for the last five years, having become disillusioned with the job. But book contract committments force him to move back into The City and start writing again. 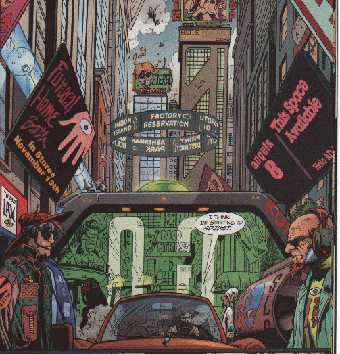 Warren Ellis likes cities. As he points out in a text piece accompanying Transmet #1, the whole idea of a futuristic city as a seething hellhole has become a sci-fi cliche since Blade Runner and beyond. The City is bigger and noiser than anything you've ever seen, but Darick Robertson's stunningly detailed panels in the first issue recreate the awe you felt when you saw that opening aerial shot of LA in Blade Runner, before the camera dropped to ground level and you found it was just full of sushi bars, King's Road punks and adverts for companies that went bust in the mid eighties.

As a starting point for an ongoing series, it can't be beat. We get to experience The City through Spider's eyes as he covers it for his weekly column, I Hate It Here. His exile to the mountains means he has to get used to the idea of urban life all over again, and we watch as he copes with household appliances manufactured by the Mafia and high on drugs, mutated stray cats with two heads and a twenty-a-day fag habit, and an assistant who, on discovering her boyfriend is sexually aroused by supermarket shelf-stacking equipment, leaves Spider to join the Brides of Fred Christ.

And the format of a journalist exploring his environment makes the stories infinitely flexible. In the past year we've had an issue where Spider just watches TV for a day ("Tonight on the Single Male Virgin Channel: HARRY'S SLUTS!"): a blistering attack on a religious convention ("Do you want to eat Peyotl and Human Flesh on the path to Spiritual Fulfillment? Or just for the hell of it?"): and a live report on a full scale riot in the Angels 8 district ("If anyone in this shithole city gave two tugs of a dead dog's cock about Truth, this wouldn't be happening"). 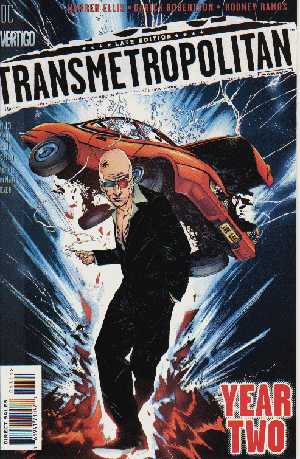 The danger of such a scattershot approach to depicting a future world is a lack of coherence: thankfully, the central character of Spider Jerusalem is strong enough to tie it all together. Ellis has performed the nigh impossible task of making a journalist a likeable, even heroic lead character. This is partly down to Spider's lovably psychotic nature and real flair for verbal invective, illustrated by his argument with the President in issue #4: "You pissed on the economy, you shat on the law and wiped your ass on the truth. You ought to be peeled, salted, driven through the streets by mental patients with spiked planks, and then used as a toilet and jizz-catcher by baboons in heat. At best."

But just as we've got used to the idea of Spider Jerusalem as a magnificently foul-mouthed thug, Ellis pulls the rug from under our feet by revealing why Spider feels such tremendous rage towards the City and its inhabitants: because he cares for them and doesn't want to see them screwed up. The only place where Spider can let that show is in his writing, and in the magnificent issue #8, Another Cold Morning, you feel that this is what Ellis really wants to do. No big swearing scenes, no bowel disruptor guns, just Spider writing about one of the Revivals, people who've been awakened from the 20th century's cryogenic freezing programmes and dumped into a totally alien world.

"She barely registered the journey to the Hostel. Everyone was at dinner when she got there. No one thought to feed her. She was led through a maze of beds that smelt sharply of the people who slept in them. Looking at her new charity-donated clothes, still bearing the ammonia spoor of the man who wore them last, Mary's shocked brain started to a new understanding.
"She wasn't wanted here.
"She was Revived out of a sense of begrudged duty. She'd been foisted on a future already busy enough with its own problems by a past that couldn't have cared less.
"She could have told the future what it'd been like to meet Che Guevara in that old Cuban schoolhouse. She could have told them about the last Queen and Albert Einstein and a million other true stories besides. But the future didn't want to know. It honoured the contracts with the past: revived them, gave them their money back, gave them the Hostels. Put them away with a new, unspoken contract: Don't bother us. We're not interested."

At the time of writing, Transmet is just entering its second year, moving from DC's science fiction imprint Helix to the more adult-oriented shores of Vertigo. The first three issues have been collected in Transmetropolitan: Back On The Street, with the promise of at least one more collection to come. So don't wait for it to be ruined by a crappy movie adaptation: go out now and buy the comics and read them in public and tell everyone about them. You shouldn't be embarrassed about reading comics in public when they're as good as Transmetropolitan. I'm certainly not. Being a monkey, and all.

Warren Ellis has his own home page, particularly good for snotty insights into the comic biz.

Space Beaver is a self-confessed Darick Robertson fanboy page, named after one of his earlier, more obscure works.

The Transmet Feed and Pupin Grove [dead link] are the two unofficial fan sites currently on the Net. More will follow. [For example, Transmetropolitan.com.]