July 14th, 1998. Bastille Day. It's the day when my first website, The Unpleasant Lair Of Spank The Monkey, made its debut online. This means I've been doing this nonsense for ten years now: and as a result, July 2008 is going to be a bit of a retrospective. Scrub that: a lot of a retrospective.

I've been reposting bits from the old site on this blog for the last couple of years whenever it's seemed appropriate, normally as a tie-in with some current artistic event. You may wonder just how many pages from the old site still haven't been posted here yet, and I can give you an answer to that question: 62. So throughout July, I'm going to be reposting two of those pages every day (at around 11am and 3pm BST), in order of their original publication. Think of it as an alternate history of the first ten years of Spank on the internet, told in terms of those articles I haven't considered worth repeating up till now. Each piece will have had its links tidied up (including the inevitable Amazon whoring), and some what-happened-next material added where appropriate. All the original duff writing stays as it is, though. Enjoy. (Normal service will be resumed in August, with reports from Japan and Edinburgh.)

In the meantime, your Simian Substitute Site for July 2008 is this very page here, which lists all of the Simian Substitute Sites from July 1998 to the present day. That's nearly ten dozen monkey-related links for your enjoyment (or would be, if some of them hadn't died in the interim). Ready? Here we go.

July 1998 - Monkey!
The nature of Monkey is irrepressible! A fan site dedicated to the classic Japanese TV show.

August 1998 - Monkeys On The Simpsons
First appearance of a page from the all-encompassing Citizen Lunchbox media empire.

September 1998 - The Fantastic Typing Cybermonkey
This is how we used to amuse ourselves on the Internet in those days.

October 1998 - Tom The Dancing Bug (featuring Charley the Australopithecine)
Ruben Bolling's cartoon character is an australopithecine just like me, so I like him.

December 1998 - A Sea Monkey Christmas
A festive section of the Sea Monkey Worship Page reveals their appalling taste in carols.

February 1999 - Ape-O-Naut
A celebration of monkeys both in space and elsewhere.

March 1999 - Mr Monkey's Index Of Famous Monkeys
Citizen Lunchbox's exhaustive list of appearances by monkeys on TV, in movies and in books.

April 1999 - Poptart Monkeys
Pennsylvania-based rock band who appear to have survived the inevitable lawsuit from Kellogg's.

May 1999 - The Monkey Dance [dead link]
The Hampster Dance, but with monkeys.

June 1999 - The Mad Monkey Society [dead link]
Secret society of monkeys, gathering together to battle the apocalypse coming in 2000. Oops.

August 1999 - Drum & Monkey, Edinburgh [dead link]
Possibly defunct bistro in Queen Street, Edinburgh. Not to be confused with the pub in Glasgow.

September 1999 - The Pointy Cheese Clan's Guide To Monkeys [dead link]
Tsk. Students. You turn your back on them for a few minutes and they've closed their websites down.

November 1999 - Jiangsu Golden Monkey Machinery Group Corporation
All the latest construction equipment, presented by a monkey in a hard hat.

May 2000 - Vote Monkey
Originally helped you choose your candidate for London Mayor - now it's a more general poll site.

August 2000 - The Monkey's Pants [dead link]
A fan site for Buffy The Vampire Slayer, or at least it was when it was alive.

September 2000 - Find-The-Monkey
Like Find-The-Spam, but with monkeys. That's their excuse.

December 2000 - Splitzy's Planet Of The Space Monkeys [potentially unsafe link]
Tribute site for an animated show which CRASHED MY FUCKING BROWSER when I last visited. 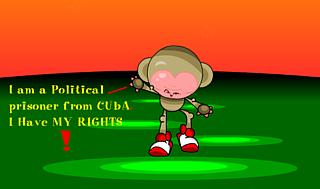 January 2001 - Little Red Monkee
It's the tune that either makes this one for you, or drives you completely over the edge (hello, RussMeyerGirl).

February 2001 - Monkeybone
Official site for the Henry Selick flop movie, sadly minus the poo-flinging Flash game that used to be there.

April 2001 - HiMonkey.net
The small but perfectly formed Monkey goes out on adventures and comes back with photos.

May 2001 - Mr Monkey T-Shirts
Citizen Lunchbox do market research for a t-shirt that I don't think was ever actually produced.

June 2001 - Monkey vs Robot
James Kochalka's musical version of his cartoon book is now most easily found on YouTube.

July 2001 - Monkeyphonecall.com
Give these guys ten bucks, and they'll phone up the person of your choice and make monkey noises.

September 2001 - ChimpNet
From what I can remember, it was an internet site about, er, chimps. I'm not sure what it is now.

October 2001 - Google Image Search for 'monkey'
I used to get a lot of letters from kids asking if I had any pictures of monkeys: well, here's 30 million.

January 2002 - Stone Monkey Sword Dancers
Traditional English dancing with edged weaponry in and around the East Midlands area of England.

February 2002 - ITV Digital Monkey Knitting Pattern
Back when he was the mascot for ITV Digital, before he moved on to PG Tips.

July 2002 - Monkey Birthday Tee Shirt
Download this page, trace it onto a blank shirt, get out your fabric markers and colour it in.

September 2002 - Monkey Business [dead link]
Somebody's homepage that apparently linked to me once. And it had terrible music.

November 2002 - Rally Monkey
The mascot of the Anaheim Angels baseball team, who helped them win something or other in 2002.

December 2002 - Monkey Steals The Drum
Just another band with 'monkey' in its name. Sadly, it looks like one of their members died in 2006.

March 2003 - We Like The Moon by The Spongmonkeys
Demented Joel Veitch song, subsequently picked up for a deeply disturbing set of Quizno's adverts.

May 2003 - Monkey Curling
All computer games work better with the addition of monkeys: and all other sports, too. 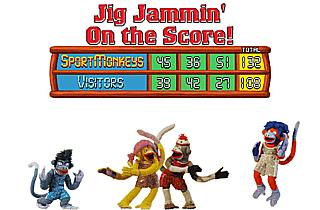 July 2003 - Sport Monkeys: The Extreme Sock Jocks
I have no idea who these creatures are, but I assume that young people strung out on Sunny D will find them entertaining.

August 2003 - The House Of The Orange Monkey
Meet Mr Monkey: originally from China, now resident in the UK, and travelling all over the shop.

October 2003 - The Patchwork Monkey
The official site of a short scary movie for children. Watch the trailer (15.8mb Quicktime file).

December 2003 - Barcelona Zoo: Snowflake's Group
A superstar gorilla: the number one attraction at Barcelona Zoo until his death in November 2003.

May 2004 - Theatremonkey
Tells you all the practical stuff about the West End theatre experience you won't get anywhere else.

June 2004 - Supergrass: Children Of The Monkey Basket
An alternative site to their official one, run by the band themselves. Pleasingly ramshackle.

August 2004 - Brass Monkey, Edinburgh
The best pub in Edinburgh with the word 'monkey' in its name. Very convenient for the Pleasance.

September 2004 - Ain't No Monkey Business... Just Gorilla
Andrew Tkaczyk's sponsored run for the Dian Fossey Gorilla Fund. Not that you cared at the time.

October 2004 - Food-Eating Battle Monkeys!
The Belated Birthday Girl is a Toast-Eating Surrender Monkey with a rating of zero. What are you?

November 2004 - Monkey Portraits, Jill Greenberg Studio [dead link]
Photographic portraits of monkeys which treat them as if they were human subjects.

January 2005 - Little Monkey Murals
Got kids? Want to have cool stuff all over their bedroom walls? LMM can help you with that.

February 2005 - First Drink Of The Day by 7 Seconds Of Love
Joel Veitch's ska band made their debut on the interweb with this monkey-driven ode to alcoholism.

March 2005 - The Gorilla Cover Gallery
Over 500 comic book covers with one thing in common: they all feature gorillas.

April 2005 - Ketjak: The Ramayana Monkey Chant
A chunky bit of audio (27.7MB of MP3) of a tribal chant that was in a Sky advert at the time.

May 2005 - Yahoo! video search for 'monkey'
Back in the days before Google Video got better, and then YouTube made them both redundant.

June 2005 - MonkeyPeaches
To coincide with our trip to Hong Kong, a site celebrating the delights of Asian action cinema.

September 2005 - The Furry Monkey
A site where Karen talks about her Non-Hodgkin's Lymphoma. More fun than you'd think.

October 2005 - Creative Commons: Make A Monkey Movie
A script for a movie of the Scopes "Monkey" Trial, available for anyone to perform.

November 2005 - Arctic Monkeys
Pure and simple bandwagon jumping on my part, I'll admit. They're good, though, aren't they?

December 2005 - King Kong
Possibly the most obvious Simian link of all time, in the month of release of Peter Jackson's movie. 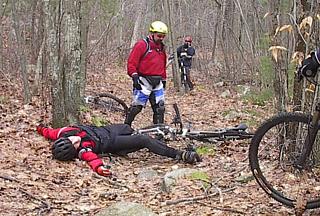 February 2006 - JobMonkey
Job search site, because that sort of thing was rather at the forefront of my mind at the time.

March 2006 - SoulMonkey
A Stoke-on-Trent events promoter whose site now appears to have nothing but errors behind its front page.

April 2006 - Super Monkey Poop Fight
A Shockwave game involving monkeys and poop! No wonder I took three months off after this.

July 2006 - frantically plotting the relaunch, so still no site

August 2006 - Monkey Music
A series of classes which introduce music to young children all over the UK.

October 2006 - Spank The Monkey
An exhibition of urban and street art which took place in Newcastle and Gateshead.

November 2006 - Cheeta, The World's Oldest Chimpanzee
The chimp from the early Tarzan movies has retired and taken up painting.

January 2007 - Meter Monkey
A monkey-based alarm clock for your PC, to warn you that your parking meter is about to run out.

March 2007 - Drunken Monkey Motorcycle
Dave Smith, bassist with No Kill I, travels the world on his Ducati 250cc motorbike.

May 2007 - Monkey Swallows The Universe
Five-piece acoustic pop band from Sheffield (though they've been on hiatus since December 2007).

June 2007 -  Monkey Town
A venue based in the trendy Williamsburg area of Brooklyn, New York.

October 2007 - The Flash Monkey
A burlesque night that runs every so often at the Cafe de Paris in London's urine-soaked West End .

February 2008 - Monkeys Might Puke
The homepage of cartoonist Dan Lester: buy hard copies of his comic, and see free cartoons.

May 2008 - The Little Chimp Society
A portal where illustrators can show off their work and offer their services for hire.

July 2008 - Ten Years Of Simians
And I think this is where I came in. Being a monkey, and all.

Now that you have decided to become ITV 3/4 (loving those re-runs of On The Buses) when can we expect to have the repost of the Letters page.

Thanks for summing it up so well. I think I’ll be returning here often. Best Regards.

well worth the read. I found spank-the-monkey.typepad.com very informative as I have been researching a lot lately on practical matters such as you talk about…