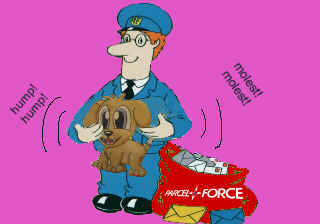 Well, that's almost it for the repost frenzy of July 2008. Pretty much every word I ever wrote on the old site is now gathered together here with the more recent stuff. Is there anything I've missed?

I can hear Suze screaming from here, so yes, there's the letters page to consider. For eight years, the Unpleasant Lair published - and frequently responded to - virtually every mail it ever received, including the hate mail and the spam. I know Suze has complained that the move to a blog format with comments has reduced the possibility of anyone writing in about anything. There are things to be said both for and against that: read through the eight years of correspondence archived below and make up your own mind. Enjoy.