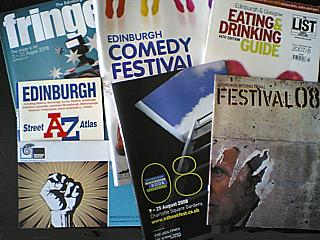 The Edinburgh International Film Festival? Dead to me. Let's move on.

I will say this, though. It's funny to think that just twelve months ago, when they announced that the EIFF was moving from its traditional festival slot to June, we all assumed that it would be the big Edinburgh controversy of 2008. If you've been following the press over the past month or two, then you'll know that the Film Festival passed off fairly quietly, and it's the Fringe that's been gathering all the headlines. And not in a good way.

There's no denying the Fringe is big business: its box office needs to cope with the demand for hundreds of thousands of tickets every August. This year, they replaced their computer system with a new one, and everything's gone to hell since. Scotland On Sunday has the best account of what's happened, but briefly: the system collapsed under the weight of orders on day one. After a couple of days of panic, they switched over to a backup system which could take the orders, but couldn't print out the tickets. The plan was to switch back in mid-July, and print out the backlog all in one go - but that didn't happen. So we're now in a situation where a small number of tickets have been posted out: most of them have still to be collected from venues: some orders have gone missing completely: and worst of all, a number of shows have been oversold, resulting in ticket holders being turned away at the door.

The official Edinburgh Fringe boards, as you can imagine, are full of very unhappy bunnies right now. Happily, it looks like people are realising that the hard-pressed box office staff in the front line aren't to blame: that honour needs to go to the Fringe management who accepted the system, and the cowboys who built it. As someone with a moderately responsible job in the computer industry myself, I feel it's only fair to point out that Pivotal Integration of Glasgow are the ones who ultimately got the Fringe into this mess. (Interestingly, their own website is down at the time of writing, and the cached version at archive.org shows that even as recently as December 2007 it looked like a ten-year-old had designed it.)

Where does that leave us? Oh, we'll get by. I've got a couple of advance bookings trapped in the system myself, but there's enough going on across the rest of the Fringe that it wouldn't be the end of the world if they fell through. (Although at least one of our group thinks it's suspicious that the Big Four venues have banded together with their own box office system for the Edinburgh Comedy Festival the very year this all happened...) Plus we've already got a few things lined up in the International and Book Festivals, who've missed out on all this foolishness.

Your team for 2008 consists of old favourites The Belated Birthday Girl, Charmian, Diane, Eve,  Lee, Nick, Rhian, Stephen and Tomas: newcomers Anne, Jeremy and Roland: and yours truly. We'll be there for a week from Saturday August 16th, and we'll aim to bring you the usual daily reports that get posted later and later in the day as the hangovers get more and more painful. Will the Fringe box office conspire against all our plans? Will National Express muck up our getting to Scotland in the first place? Can I get away with leeching off the Filmhouse's free wi-fi all week without seeing a single film there? Watch this space.

Apologies for the delay in the last two days of the diary: there's some weirdness going on right now with TypePad's posting process, and I'm reluctant to put any new stuff on the site until it's resolved. (Also, yes, I'm back home in my dressing gown and just starting to recover from the past week.) Reports on Friday and Saturday should be with you as soon as possible.