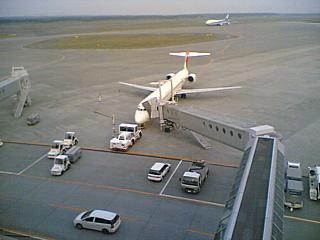 My fourth visit to Japan: you already know about the other three. But you probably also already know that this year's trip was undertaken in different circumstances from the previous ones. Since the beginning of April, The Belated Birthday Girl had been out in Sapporo on a ten-week language course. When I went out there in mid-June to bring her back, it became a holiday of two halves: the first week spent in Sapporo while she  wrapped up her course, the second week spent touring around other towns on the northern island of Hokkaido.

So this travel piece will take its structure from the holiday, and come in two distinct chunks (with a break for the Edinburgh Festival in the middle). In Part One, I'll look at Sapporo, trying to avoid overlapping with The BBG's own bloggings on the city. In Part Two, we'll focus on our tour of Noboribetsu, Hakodate and Otaru: The BBG may pipe up once or twice in there to let you know about the food and drink options available. Audio-visual supplementary material is available from a number of sources: photos on my Moblog and her Picasa, videos on my YouTube channel  and (New Thrill Alert!) hers too.

Aaaaaaaaand we're back. Hope you had a good July, and that the reposts from the old place were sufficiently entertaining for you. Tough titty if they weren't, obviously, but at least it's over now.

So we come to August, and the usual formula applies: add one to the year, divide by three, and if the result isn't a whole number then we must be off to Edinburgh again. Once again, a dozen or so of Spank's Pals will be spending a week at the greatest arts festival in the chuffing world, and will battle through their hangovers in order to bring you daily reports. Look out for them later on this month.

But that's not all! Before that, you've got some new travel writing to come as well. Because just before the July hiatus, I spent two weeks in Japan with The Belated Birthday Girl, at the tail end of her language course. We visited several towns on the northern island of Hokkaido, and you'll be hearing about that this month as well. So, plenty of new material for you.