Reviewed today: Antonio Forcione, Because It's There, Dorian Gray, Terminus, Who Writes This Crap? 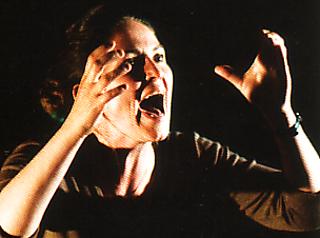 It wasn't until after I went to press this morning that I realised I'd missed an important detail in yesterday's writeup. Thanks to Dizzee Rascal's fashionably low-slung trousers and Daniel Kitson's kecks-down race around the Stand, I got to see the underpants of two famous people on Thursday. Can I beat that today? Well, no. But at least I can report that I've finally got to see a great piece of theatre at this year's Fringe, after several days of disappointments.

Inevitably, the Traverse Theatre is responsible, with the help of the Abbey Theatre in Dublin. Their production Terminus is written and directed by Mark O'Rowe, who I only really know from his film work, most recently his screenplay for Boy A. This play has three characters - A (no relation), B and C. A (Andrea Irvine) is an ex-teacher working with the Samaritans, who gets a call from a former pupil which sends her off on a rescue mission. B (Eileen Walsh) is a lonely young girl whose sudden discovery of love turns out not to be the most surprising thing that happens to her today. And C (Karl Shiels), for want of a better description, is a sociopath who's foolishly made a life-changing deal without reading the small print.

On a beautiful broken picture frame set by Jon Bausor, the three characters tell their stories in a series of interwoven monologues. O'Rowe gives their dialogue a poetic structure, with internal rhymes giving their words an irregular rhythm and the odd surprising turn of phrase. The stories are gripping in their own right (the switches from one narrator to the next are always timed for maximum cliffhanging impact): the slowly revealed links between them are what elevates the play to greatness.

The performances are beautifully judged: these stories build from a slow start with some whiplash turns in the narrative, but they never feel forced or artificial. There's a very Irish tradition of plays constructed from monologues, but O'Rowe takes the form into wholly unexpected areas, making the 105 minutes absolutely roar by.

So, congratulations to the Traverse: it took me nearly a week to find the right play, but once again you've provided the theatrical highlight of my Fringe this year. Mind you, your free wi-fi is pish. By the end of Terminus, it's mid-Friday afternoon, and we have a gap before our next scheduled show around 5pm. We need to find something quick that's in the same building as that show. So we run to the Underbelly, and we see Because It's There because... er... it's there. Plus, it's a theatre piece that promises Live Climbing! in its blurb, and you don't get to see that on the Fringe every day.

Adam Brace's play is quite ingeniously structured. Its central character is Hal, who loses his wife in a rock climbing accident: but apart from some wordless climbing sequences, we never get to see him. Instead, we hear one side of a series of dialogues with the character. (Think Bob Newhart, if you're old enough to remember him.) All the people we see talking to Hal - his father-in-law, his son, the guide on the fatal climb, a child psychologist - are played by the same actor, Thom Disney.

Because It's There is a short piece, and an intriguing one. The idea of a character portrait which doesn't feature its central character is clever, but by definition it can't give you a complete insight into his state of mind. We can tell that Hal is suffering tremendously from grief, and has some ambivalence about returning to climbing again. But as we never get to hear his side of the story, his reasons remain tantalisingly vague (which may be partially acknowledged in the title). Nevertheless, Disney inhabits all of his roles convincingly with the barest minimum of props, and the sequences on a ten foot high climbing wall have a genuine edge of danger to them. (Possibly more than just an edge, given the prominent black eye that Disney sports at this performance.)

In the same room straight afterwards come Joel Stickley and Luke Wright, two performance poets (we saw Wright's Poet And Man here last year) whose new show, Who Writes This Crap?, is a more prose-based affair. It looks at all the written words that a person will be forced to read in a typical day, and parodies them: from hyperbolic advertising copy to the forced jollity of work emails. In between examples, Stickley and Wright lecture us on the way that language is abused on a daily basis.

In a shameless having-your-cake-and-eating-it move, they admit that this show itself is yet another advert: Who Writes This Crap? was published as a book last year, and the show is not much more than a reading of its highlights. It's a slightly pointless exercise: there are definitely some funny moments, but a work that looks at the foibles of the written word makes much more sense in written form. (Particularly when they frequently project the relevant page from the book at the back of the stage before reading it.) Aside from Wright's enjoyable meltdown during an advert for a museum, there's very little gained here from performance. 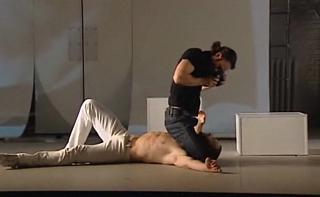 Following a rather nice team dinner at Backstage Bistro (and let's hope to God their website designers never hear from Disney's lawyers), it's time for our first and only event in the International Festival. Regular readers will know that we only tend to do one or two events in the Big Festival per year, and some years we avoid it completely: that whole Die Ahnlichen debacle in 1998 still rankles a bit. But the chance to be at the world premiere of Matthew Bourne's Dorian Gray has to be jumped at, especially when we manage to get perfect seats in row B of the stalls for a measly £20 (pricing might just be the thing the International Festival does best of all).

I don't usually see a lot of dance, but I'll always make an exception for Bourne. I've seen quite a few of his biggies - Swan Lake, The Car Man, Edward Scissorhands - and always enjoy the look of his pieces, even when the narrative angle gets lost in the dance (a problem that I particularly found with Scissorhands). His adaptation of Dorian Gray takes Oscar Wilde's original story and drags it into the 21st century: Gray now becomes a successful male model, one who drags both male and female lovers into his spiral of wickedness. The one thing that everyone knows about Dorian Gray - the portrait in the attic that decays while he remains flawless - has been sneakily replaced with an evil twin (a choreographer's solution to a visual narrative device if ever there was one).

Dorian Gray's themes of decadence and narcissism are more relevant today than ever before, and there are plenty of cheeky contemporary references both in Bourne's direction and Lez Brotherston's design: a disco with a mirrorball shaped like Damien Hirst's diamond skull, an appearance by Gray on a chatshow featuring a big-haired host and some poofs around a piano. The set is similarly ingenious, using a single door and a rapidly revolving stage to allow for more entrances and exits than a Brian Rix farce.

But at the heart of it all is the dancing: and though I'll happily admit I don't have the critical tools to do it justice, it's visceral, energetic and sexy as hell. And unlike Edward Scissorhands, it tells its story beautifully - possibly not exactly Wilde's story, but definitely the one that Bourne wants to tell.

To wind down the week, a few of us catch Antonio Forcione at the Assembly. He's one of those people who only seems to exist at the Fringe: he comes to Edinburgh, plays some guitar, makes loads of people fall in love with him, and then more or less vanishes again for the rest of the year. (Okay, I've just checked the gig list on his website, he doesn't vanish completely.)

Most of his performances this year have been in the 10pm slot: but at weekends he's doing midnight shows, and they make for the best sort of late-night entertainment that doesn't involve swearing or the removal of trousers. (I'm thinking about The Honourable Men Of Art here, obviously.) Joined by his usual percussionist Adriano Adewale, plus a cello and bass for these late shows, he performs an hour of slick and entertaining music that fuses multiple genres into something all his own. It isn't until the encore of Slap And Tickle that I focus on his playing and realise that he's actually pretty bloody good on a guitar. Which shows, if nothing else, that it's the music that counts rather than the technique: which is as it should be.

The Belated Birthday Girl - First, a declaration of interest - I'm a big fan of Innocent smoothies. And I enjoy reading the whimsy on the labels. So maybe the fact that one of the few real-life examples Joel Stickley and Luke Wright targetted in Who Writes This Crap? was the Innocent smoothie whimsy coloured my reaction, but I was slightly disappointed in the show. Or maybe it was just that I'd assumed the show would be doing something different to what the actual content was. But I'd imagined that what we would have was genuine examples of the writing which assails us all daily, re-written by Stickley and Wright, rather than the very exaggerated parodies of office emails and advertising copy we got. The show was pretty entertaining, and did make me laugh, but I'd expected more.

in mine and Joel's defence the show was at least half new material, probably more. only the fictional pieces were from the book, all the lectures were new for the stage. don't want you to think we didn't work for it ;-) x