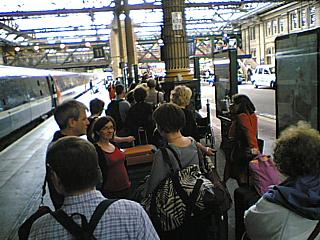 And it's true. For the first time since they wrestled control of the line from the cold dead hands of GNER, National Express trains are carrying seven of us from London up to Edinburgh. And one of the enhanced facilities that the new franchise holders are providing - aside from their slow but workable free wi-fi - appears to be the previously unheard-of concept of Decent Scottish Weather In August. As we zoom across the border keeping perfect time, the Scottish countryside is bathed in glorious sunshine beneath a clear blue sky. Sure, we're all too busy poring over our copies of The Scotsman and planning our week to really appreciate it, but it's nice to know it's there.

Still, it stops short of actually breaking into rain: the train pulls into Waverley bang on time: and even the initial epic taxi queue is quickly whittled down to allow us to get to our Napier University flats well before the official check-in time. Unfortunately, this is where the system starts to break down a little bit. The helpers onsite at Napier are still running around trying to get the flats ready, dealing with the double whammy of an overworked cleaning staff and a crazed punter who appears to have unilaterally decided that they want to stay in their flat for an extra night.

It takes an hour or two to get that sorted, but eventually we're all set up for accommodation. The traditional shopping runs associated with self-catering flats are successfully performed, and then we're all off in different directions to get this festival started. For The Belated Birthday Girl and myself, this means a couple of posh fish suppers at Element, and then off to the Book Festival yurts for our first proper event. "How many people here have never been to a literary reading before?" asks Chuck Palahniuk. Surprisingly, around a quarter of the Book Festival audience raise their hands. "Well," he reassures us, "they're all just like this one. Even Charles Dickens did it like this."

Within ten minutes, Palahniuk has handed out a hundred personally signed sex dolls into the audience and is leading them in a race to see who can inflate theirs the fastest. Yeah, that's pretty Dickensian.

I realised the other day that, unlike that quarter of the audience, I've seen Chuck Palahniuk at literary readings more times than any other author on the planet. As The Belated Birthday Girl is a huge fan of the movie of Palahniuk's debut novel Fight Club, one of our first dates was spent at his London event to promote Choke (soon to be a major motion picture with a somewhat confused soundtrack). He's cheerfully signed a copy of Lullaby with the dedication "To Spank The Monkey (?)": and most recently autographed Haunted for The BBG, as seen in the blurry and artfully cropped photo above. Each time, he's been an entertaining reader and thoughtful analyst of his own work, and the same is true of tonight's event.

It's a peculiarly structured hour, but it does the job. Palahniuk opens with an amusing parable involving two of his friends and their diabetic cat, to illustrate what he sees to be the key function of his writing: to take universal and ancient stories, and tell them in new ways. After the chaotic interlude with the hundred sex dolls, he gives the audience a choice: do we want to hear him reading the previously published Guts, or do we want a new story he's written specially for events such as these? It's a tough call: Guts is widely regarded as the single most disgusting collection of words ever assembled on paper, and stories of people passing out or vomiting during public readings are legion. But on the other hand, you know, new stuff. In the end, new stuff wins out, so we get an excellent story called Loser which shows you literally what The Price Is Right is like on acid. He's careful to tailor the cultural references for a non-American audience, which leads to the first great heckle of my Festival so far. "Rice-A-Roni is like a combination of rice and noodles. What would be the equivalent you'd have over here?" And the reply comes from the back of the hall, "a packet of rice and a packet of noodles."

Considering this event is mainly meant to be promoting Palahniuk's new novel Snuff, there's very little discussion of it tonight: both the on-stage interview and the audience Q&A are more concerned with his writing process generally. He sees writing as, surprisingly, a social activity: he meets up every Thursday evening with the same writers' group he's been going to for the past twenty years, and he sees their interaction as being an important part of his job. He also goes into detail on the physicality in his writing, suggesting it's a shortcut to the emotional and intellectual parts of a story: "if you don't know what to write next, describe the inside of your character's mouth." Again, he illustrates this brilliantly with a parable about a baggage handler trying to cause a work-related injury in order to get some quick cash: the point isn't the gruesome detail of the injury, it's the way it shows how the baggage handler feels about his life. It also shows that Palahniuk is a born storyteller: he cuts off this tale precisely at the funniest point and moves on to another topic, only to be interrupted by a woman screaming from the back "WHAT HAPPENED?" 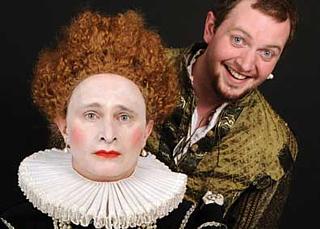 From the Book Festival we move on to Teviot Place, and it's like a war zone. Within a small area of space you have multiple venues for Gilded Balloon, Udderbelly and Sweet all crammed together, and at 10pm on a Saturday night it's virtually impossible to move for punters trying to get in and out of shows. Even a simple swifty in the Balloon's lovely Library Bar becomes a huge production number, and we have to negotiate a complicated one-way system just to get out of the building. But eventually we make it over to the Udderbelly's Cow Barn for Elizabeth And Raleigh: Late But Live.

This is another historical romp from writer Stewart Lee and performers Simon Munnery and Miles Jupp, the makers of that Johnson And Boswell show last year that proved so amusingly divisive. In fact, there are a lot of similarities in structure with the earlier show. Jupp comes on first as Sir Walter Raleigh, and roundly insults the Scottish. ("Without my potato, the Scots would have naught in their diet but alcohol and cigarettes.") Munnery then makes a spectacular entrance as Queen Elizabeth I, and roundly insults everyone apart from the English. ("There is no Spanish word for 'honest'... or so they tell us.") And then we watch the on-off courtship of the two, conducted primarily through the medium of 1980s power ballads.

It's a tighter show than Johnson And Boswell, but there's still the feeling that this is just a bit of late-night mucking about for all concerned, especially given the high level of corpsing by both Jupp and Munnery. Nevertheless, the fun's infectious: and while the earlier show had dull stretches, here you're never too far away from another fine bit of verbal wit. (Most of this comes from Queen Elizabeth, whose one-liners have the unmistakeable structure of Simon Munnery's own gags. "Words of wisdom can come from the mouths of fools... but mostly foolishness. It's what they're known for.") Add at least one splendid visual coup - a depiction of the routing of the Spanish Armada - and you've got an entertaining bit of post-pub fluff. But who will they choose to complete the trilogy?

The Belated Birthday Girl - As has been noted, I'm a bit of a Chuck Palahniuk fangirl, although I'm far less obsessive these days than I used to be.  It all started for me with Fight Club, and went on from there.  I'll always jump at the chance to see him give a talk, though, even if I've still got a backlog of his books to read.  And once again he did not disappoint.  One of these days I'd like to be in a room with him reading Guts, but as I've read it several times (and in fact fairly recently, too), I was one of the majority who voted for the new story.  And the new story was great.  But there's also something I really like about the way Chuck reads his stories, and his anecdotes and the interaction he likes with the audience, which make these events much more than just readings.  Although I did note that at times he didn't exactly answer the questions he was asked, but more used them as a starting off point for answers he's probably prepared and given before, those answers were always both interesting and entertaining and I doubt anyone felt short changed by them.

I particularly liked his comments about the physical reaction he aims for in his work, and I noticed that as he mentioned various parts of the body, you couldn't help being aware of that part of your own body.  I also found fascinating that he said that he likes how that reaction makes you know what's coming next, even before he's said it.  We didn't have time to go to the signing tent and pick up a copy of Snuff, but I'll be buying one some time to make that backlog a little longer.

Nick - After an absence of three years, Otis Lee Crenshaw returned with an all new band and an all new collection of songs, which he presumably wrote with the new band. Having set the bar so high with his previous band (winning the Perrier in 2000), this new collection of songs sounds like a compilation of B sides, and it is difficult not to hanker for some of the old material. All the usual ingredients were there, but the random interaction with the front row did not yield the comedy gold we were hoping for. It was a night for a lot of perspiration and little inspiration.

Charmian - Otis Lee Crenshaw fulfilled his minimal legal contractual obligations. [They should use that on the posters - Spank]