Home Archives/Categories About Me RSS Feed Mailing List Email
Felix The Cat And The Invocation Of The Whore Bitch Goddess Babylon
Simian Substitute Site for October 2008: Fight Like Apes 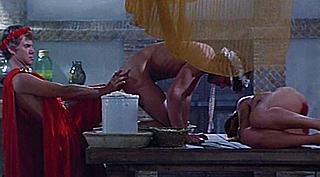 To be frank, the story behind the making of Caligula is infinitely more interesting than the film itself. Just a glance at the opening credit roll gives you a hint of how troubled its production was:

Guccione's name is the key one here. Back in 1976, when Caligula started filming, he was the boss of Penthouse magazine. Gore Vidal had approached him with a script documenting the life of Rome's most demented emperor, and Guccione saw it as an opportunity to produce a whole new type of movie - a big-budget historical epic, with shagging. He assembled a cast of heavyweight British talent that no porn film before or since has ever matched: Malcolm McDowell in the title role, Helen Mirren as his wife Caesonia, Peter O'Toole as his predecessor Tiberius, and John Gielgud as adviser Nerva. With a bevy of Penthouse Pets as supporting players, and notorious Italian softcore director Tinto Brass at the helm, what could go wrong?

Well, everything. By the time Caligula finally saw the light of day in 1979, both Vidal and Brass had been thrown off the project. Rumours of major personality clashes between the writer, the director and Guccione were rife, particularly when the producer took it upon himself to film extra hardcore material that could be inserted into the film whenever the plot threatened to get in the way. The definitive version of the film, over two and a half hours long, is most famous for those hardcore scenes: but several other versions have existed over the years, as censors, producers and distributors have all had a go at recutting it to their liking.

The technical aspects of the film don't hold up much better. If there's one element that remains impressive to this day, it's Danilo Donati's magnificent set and costume design. Donati had previously worked with masters like Fellini and Pasolini, and he comes closest to delivering the epic look that Guccione was aiming for, from the gaudy opulence of the palace settings to the lunatic scale of Caligula's death machine. Unfortunately, Brass ruins the visuals with his camera's habit of obsessively zooming in and out all the time, one of those stylistic tics peculiar to the period. Meanwhile, Paul Clemente's score veers clumsily between bombast and sleaze, rather like the film itself. The music's been padded out with classical selections from Khachaturian and Prokofiev, but somehow they just make it sound even cheesier. This must have been especially true for British viewers when the film was first released, watching the tragedy of Caligula's incestuous relationship with his sister being played out to the theme from The Onedin Line.

If you're interested in the film's hellish production history, there are plenty of new documentaries and commentaries on the subject in the Imperial Edition, though I'm afraid I haven't seen any of them myself. But I'm glad to report that the one extra from my 1999 American DVD appears to have made it onto there: the portentiously-titled A Documentary On The Making Of 'Gore Vidal's Caligula', which  dates back to before the release of the movie (while it still had the working title Gore Vidal's Caligula). Both Vidal and Brass justify their efforts in speeches to camera, before Guccione wades in with his hairy chest and medallion (oh yes) to contradict them both and give his own view on the "package of excellence" he was assembling. Helen Mirren is allowed one line of opinion - "an irresistible mixture of art and genitals" - before someone notices the filthy smirk on her face and bars her from the rest of the documentary. The whole thing is topped off with a voiceover narration from Bill Mitchell, whose subterranean tones worked brilliantly on thirty-second Denim adverts but sound bloody stupid stretched over a sixty minute film.


When Mitchell claims that Caligula "will without question be the most widely seen and talked-about film of our time," it's hard not to be entertained by the industrial levels of hubris displayed by all concerned (with the possible exception of Helen Mirren). And that's probably the main reason to buy the Imperial Edition of Caligula today: to watch in appalled fascination as a large-scale movie production goes hilariously off the rails. It's certainly not worth buying for the sex - I've spent nine years assuming that this was the hardest-cored thing in my DVD collection, only to find that 42nd Street Forever: XXX-Treme Edition knocks it into an enormous-cocked hat. Film students will have a great time with Caligula: wankers, not so much.

As I have probably mentioned to you once or twice, I furtively (i.e on my own) saw this when I was about 17 at the Prince Charles Cinema. At the time I thought it was a film about Romans with a bit of sex thrown in, when it was in fact the complete opposite.

Reading your piece however got me thinking about what must have been on my mind at the time, when I actually went to see it. Well I have sussed it, namely as an even younger person (than 17) I saw Frankie Howard's UP POMPEII on TV, and was highly titillated by that (this is the Seventies we are talking about). So I assume I must have thought CALIGULA was going to be more of the same (i.e Romans = nudity and naughty sex). Well in fact it was mind numbingly boring on all levels. i.e. UP POMPEII was sexier and had a far more coherent story.

Anyway Channel 4 did show a version (which they claimed was uncut) a few years back. Well I soon had that on fast forward, deciding I would stop only for some interesting naughty bits. Sadly there wasn't any (interesting ones that is), and I had fast forwarded through the film in a matter of minutes.

I think this is like Ken Russells THE DEVILS, in the fact that it picks up an undeserving reputation by virtue of the fact that is was banned and few people actually got to see it.

Nothing wrong with a shagging scene in a film but the slice and dice nature of the full version does make it almost impossible to watch, even more so when you know what has happened in the edit.