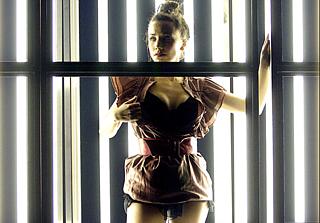 Well, to be fair, it's not a solid nine-hour block of theatre. Lipsynch is more like nine tightly linked one-act plays: during its current short run at the Barbican in London (until September 14th 2008), you can see it at weekends as an all-day marathon with five intervals, or during the week spread across three consecutive nights. Thanks to DVD box sets, people will happily watch entire TV series in binges like this: maybe it should be happening more often in theatre, now.

If there's a single character at the centre of Lipsynch, it's Ada (Rebecca Blankenship), an opera singer who we first meet flying back from Germany to Canada after a performance of Gorecki's Third Symphony. Anyone who's seen Fearless will be nervous at the juxtaposition of the Third Symphony and commercial aircraft, and tragedy does indeed strike on the flight. As a result of that incident, Ada becomes connected to an inner circle of people: her adopted son Jeremy (Rick Miller), her new lover Thomas (Hans Piesbergen), fellow passenger Lupe (Nuria Garcia), and part-time care worker Sarah (Sarah Kemp). Four other people subsequently join this web on a secondary level - Marie (Frederike Bedard), a patient of brain surgeon Thomas: Michelle (Lise Castonguay), the sister of Marie: Sebastian (Carlos Belda), the sound mixer on Jeremy's debut film: and Jackson (John Cobb), a policeman investigating a case whose trail leads him to Sarah.

The nine acts of Lipsynch focus on each one of these characters in turn, and slowly reveal the connections between them all. It makes for a hugely ambitious story, covering a wide range of locations, but Lepage's legendary visual skills are more than up to the job. Set designer Jean Hazel bases all the action around a simple three-panel frame, which is endlessly broken up and reassembled into dozens of sets – stretched out to form the interior of a plane, pushed together to form three walls of a small apartment, and everything else in between.

As ever, Lepage doesn't try to hide the artificiality of his settings: he shoves it upfront and makes it a feature. It's most apparent in the fourth act, depicting the chaotic production of Jeremy's film. The scene changes here are more elaborate than anywhere else in the play, so Lepage has the character of the film's assistant director loudly co-ordinating each change as it happens. Similarly, the sound and lighting techies are placed in full view at either side of the stage, and in some scenes are actually wheeled out to become part of the action. If you want your theatre to be as seamless as film, you're going to be disappointed, but that's not what Lepage is aiming for.

What he is aiming for is difficult to pin down in a couple of sentences: that's why it takes Lepage nine hours. But the central theme, as implied in the title, is verbal communication: how we use it from day to day, and how we cope when it breaks down. Some scenes are played out wordlessly: others fall apart in a babble of multiple languages, with the projected English surtitles struggling to keep up. The mismatch between what we say and what we mean is explored in the recurring motif of the dubbing studio: a place where spoken words are translated into other languages, rewritten to fit someone else's script, or even added where none previously existed. Time and again, music is shown to be the one alternative form of communication open to us: most notably in the case of Marie, whose surgery leaves her temporarily able to sing but not to speak.

The danger here is that I'm making Lipsynch sound like a bunch of motifs and images in search of a plot, and that's far from the case. Coincidentally, the man who comes closest to being Lepage's British equivalent - Simon McBurney, artistic director of Complicite - will be at the Barbican a couple of weeks after him, with a revival of last year's hit A Disappearing Number. I'd suggest that Complicite have been responsible for some of the most intellectually stunning theatre I've seen in years: but sometimes they're a little too focussed on structure and ideas, at the expense of the human story they're trying to tell. And that's not something I find with Lepage. It would be so easy for Lipsynch to schematically wrap itself up in a circular structure - hell, one of its characters is even called Lupe - but instead, we get a deeply emotional and satisfying climax, and it doesn't strike you till much later how the closing image relates to the opening one.

A production this size is a huge undertaking, and given that we saw it on the very first night of its run, it was inevitable there'd be the odd hitch. The most frustrating one was a brilliantly conceived pair of scenes – actually, the same scene observed from two different viewpoints – which failed because a particular lighting choice made the English surtitles unreadable to those of us who were in the cheap seats. But that's merely the most disappointing section of a nine-hour play (and given Lepage's reputation for tweaking as he goes, it may already have been fixed). For the rest, this is a staggering piece of work, with humour, drama, a fascinating mix of live and recorded elements, plus – and you have to keep reminding yourself of this as you watch – a cast of no more than nine actors playing dozens of roles.

Lepage quietly tucked himself at one end of the line at the opening night curtain call, and that was a wisely humble choice on his part: for all the brilliance of his direction, the jaw-dropping dedication of his cast and crew to his work is even more impressive. At the time of writing, there are still a few seats available for the last couple of performances at the Barbican. If you can spare nine hours at the weekend, do it: you won't notice it going once you're there.

If anyone's counting, the Lipsynch review is the 500th post on this site.