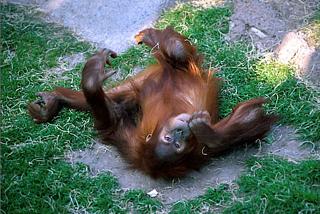 In the meantime, your Simian Substitute Site for September 2008 is Drunk Monkey.  Not quite sure why it's called that, apart from being an excuse to use the above eye-catching picture on the front page. It's the personal homepage of a guy called Robert Flint, and it's basically just a place where he can put his photos (plus an audio-visual Teach Yourself Khmer page that doesn't really fit in with the rest). Have a click around and explore for yourselves. (And in case you're tracing back to this page from your logs, Robert, it's only the use of the word 'monkey' in the title that led me to you.)

Comments! Go! (Mind you, the only person who left any comments in August was me. Sigh.)