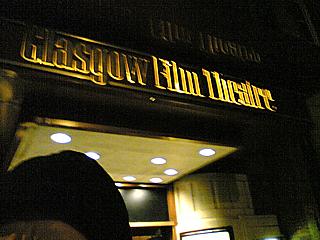 I'm afraid that London will have to start its 52nd Film Festival without me this year.

It's not like there isn't a precedent for this sort of thing. Back in 2003, work commitments forced me to spend the first full night of the Festival at a conference in Slough. This week, I'm on a training course in Glasgow, but the result is still the same: I won't be back in London until Friday evening, meaning there's one full day of LFF action that I'll miss completely.

In 2003, that wasn't so much of a problem for this site's comprehensive, wide-ranging, and pretty much universally ignored coverage of the Festival. My compulsive habit of buying DVDs from foreign countries meant that I already owned copies of three films that had been programmed for that year - The Cat Returns, The Shape Of Things and A Mighty Wind - so I was able to post a review of those from my Slough hotel room on the first night.

Times are tougher for all of us these days, though, and I don't import anything like as many pre-release DVDs as I used to. Which means that my first night coverage could be a little thin this year, unless I come up with some sort of hideous cheat based on the idea that Glasgow just might have an interesting cinema scene in its own right. You'll have to wait and see.

But once I get back to London, it should be business as usual. The Pals and I have booked for a fair few films in advance - although, again, the whole economic situation might mean it's not quite as huge a number as in previous years - and I've got some free afternoons when I can see what matinee vouchers can get me into.

How's the Festival looking this year? Well, it's a curious one. A few months ago, Greg Dyke took over as chair of the British Film Institute, and started suggesting in interviews that the LFF wasn't populist enough for his liking. This led to speculation that he was about to take a perfectly acceptable and well-respected event, and bollocks it up with Roland Rat guest appearances and the like.

On the evidence of this year's programme, that hasn't quite happened yet. In the high-profile Leicester Square end of the event, the galas are certainly a bit glitzier, opening with the world premiere of Frost/Nixon and following up with several more red carpet events. Like last year, there'll be a huge mid-festival premiere at the Odeon Leicester Square (which was by all accounts a very buzzy affair last time, even though the film was shit). In a particularly smart move, the LFF has also got the world's first public screening of Quantum Of Solace, running almost simultaneously with the world premiere elsewhere in the Square. It's been suggested that by the time the film opens, nobody will remember the LFF's connection to the screening at all. But that's not the point: it was a cracking bit of marketing which turned the LFF programme launch into headline news at precisely the time it needed to be - just before tickets went on sale.

Elsewhere, though, it appears to be business as usual: a typical collection of interesting new movies from around the world. And gratifyingly, it would appear that ticket sales are higher than usual, with even matinee screenings already selling out. For example, I'm going to have to miss out on the Surprise Film this year (I'll throw in Body Of Lies as my guess and see what happens with that). But there are still a few galas on my list, although (as The Belated Birthday Girl has noted) the biggest and most expensive one we have tickets for will probably disappoint Greg Dyke with its lack of star power.

Still, we're not in the business of pleasing Greg Dyke here. Instead, join us for another two weeks of day-by-day reviews of the biggest and smallest films in the 2008 London Film Festival, courtesy of me and my Pals. Watch this space.