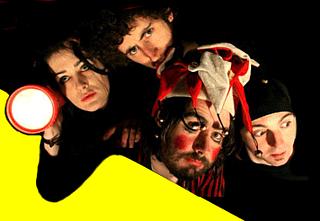 Okay, those book reviews I was promising you last month didn't quite happen. To be honest, at the start of September I wasn't expecting to have much new stuff to write about: and then Lipsynch and Caligula turned up unexpectedly, and there was the whole 40,000 hits on YouTube thing (actually, it's over 41,000 now), so I didn't feel the need to fall back on literature. I've got about half a dozen half-completed reviews on the back burner, though, so expect them to turn up in a quiet moment in the future.

There's no chance of that quiet moment being in the second half of October, when our traditional coverage of the London Film Festival kicks off. The planning meeting's been held, the postal bookings have been made, and we're just waiting to see what we've got tickets for. I'll warn you now that - as has been the case for the last couple of years - pressure of work may well mean that I won't be hitting the three-films-a-day minimum that I was achieving a few years ago. But we'll see how it goes when we get there.

In the meantime, your Simian Substitute Site for October 2008 is Fight Like Apes, the homepage of the Dublin beat combo of the same name. They've been slowly building a following over the last year or so, with appearances at the major summer festivals. This month should be a big one for them: they're touring the UK with the Ting Tings, their noisy new single Jake Summers is released here on October 20th, and their debut album Fight Like Apes And The Mystery Of The Golden Medallion shouldn't be too far behind (though you can pick it up in Ireland already).

Anyway, can't stop: books to read, films to watch. How about you? Comments below, please.