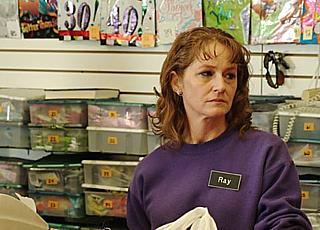 Remember back in the day when they used to tell us that a film had won prizes at Sundance, and we'd all line up around the block to fellate it? It never really happens that way any more, does it? Sure, American independent cinema is still going, and has all sorts of subgenres now like mumblecore, but it doesn't draw the festival crowds like it used to. Frozen River won the Grand Jury prize at Sundance this year, but on the morning of this LFF screening they were sending out panicky emails saying 'tickets still available!'

Part of the problem may well be the rut that American indies have got themselves into. The themes covered by that mini-festival I saw back in 1999 still keep recurring today, to the extent that a basic retelling of Frozen River's plot feels like an exercise in box-ticking.  Ray Eddy (Melissa Leo) is trying to raise her two kids in a New York State trailer home, but her husband's gambling addiction is making it difficult. When he runs off with a large wodge of money they'd put aside to buy a new house, she follows him to a bingo hall run by the local Mohawk reservation. She ends up entangled with Lila (Misty Upham), who's using the husband's abandoned car to smuggle immigrants across the US border. Ray would rather walk away from the situation, but there's no denying the money would come in useful right now.

So: blue collar setting, addiction, Native Americans, sulky teenagers (Ray's eldest son is particularly slappable throughout, thanks to a nicely judged performance by Charlie McDermott). Not to mention the screamingly obvious visual metaphor in the title - the thin ice over which Ray has to drive back and forth with people in her boot, and which is bound to crack at any minute. Tick, tick, tick, tick, tick. It's very much a stereotypical American indie movie, but it does have a couple of things in its favour.

Writer/director Courtney Hunt at least knows the risks of cliche, and her screenplay manages to wrongfoot the viewer a couple of times by veering away from the most obvious plot developments at the last minute. And she's helped enormously by the main factor that got us into the cinema in the first place: Melissa Leo's excellent performance in the lead. She's always been a compelling actress since her days in Homicide: Life On The Street, the Best Damn Show On TV Till The Wire Came Along, and it's nice to see her bringing her talents to a leading role. 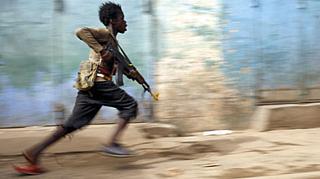 How do I pick which films I'm going to see at the LFF? Well, sometimes I'm happy for other people to do it for me. I think I've described the process here in the past: when the festival programme is published, Spank's Pals gather in a secret London location with as many copies of it as we can lay our hands on, and over the period of one evening we make our plans for ticket purchases. During that evening, as you'd expect, deals are struck - "I'll see that with you if you'll see that with me," that sort of thing. At the end of this year's planning session, it was interesting to see that four of the Pals - The BBG, Jon, Seapea and Lesley - had all chosen Johnny Mad Dog independently, a film which wasn't on my list at all. So late in the day, I decided to join them and see what the fuss was about.

It's set in an unnamed African country in the middle of civil war, and follows a group of boy soldiers headed up by 15-year-old Johnny Mad Dog (Christopher Minie). They're tearing around from town to town, massacring whole families and taking the boys for their own ranks. As they thunder towards the city for a final showdown, Laokole (Daisy Victoria Vandy) has to take action to ensure that her own younger brother doesn't get caught up in the mayhem. Luckily for her, Johnny Mad Dog is still basically a 15-year-old boy under all his bluster, and has the same weakness as every other 15-year-old boy.

The obvious comparison point is City Of God, the last big movie we saw featuring kids gone feral. And Johnny Mad Dog trades on a similar sort of energy, the sort you can only achieve when young black boys with guns are screaming in your face and using a dialect where the word 'fucking' is the equivalent of a preposition. Initially, you do find yourself wondering if writer/director Jean-Stephane Sauvaire is just exploiting the situation and the kids for our entertainment, particularly when you learn that most of the cast are former child soldiers themselves.

But the film turns out to go a lot deeper than that - if it was all just screaming and violence, it'd be a very dull watch. The ferocious opening scenes set us up to see the soldiers as villains, but it slowly becomes apparent that they're victims as much as everyone else. Christopher Minie's performance is brilliantly nuanced, only allowing his doubts to surface in the smallest gestures. But as good as he is, he's outclassed by Daisy Victoria Vandy, whose sheer strength and determination gives this film a female energy that City Of God couldn't quite achieve. It's the contrast between the two characters that gives the film its life, and their final confrontation is electrifying to watch. 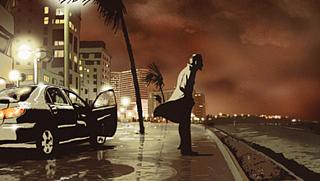 Johnny Mad Dog was a last-minute choice of film for me: Waltz With Bashir was on my list all along. Seeing the two back to back makes for a somewhat belligerent Friday night out. Bashir is a Gala screening, though, which means more Green & Black's chocolate and an extended Q&A with writer/director Ari Folman. He's good value for money, telling stories of previous festival screenings, such as his experience at Telluride when he realised all that American audiences want in a movie introduction is to be told that theirs is the best festival in the world.

As for his film: well, it's a very personal documentary, sparked off by his realisation a couple of years ago that he could barely remember anything about his time in the Israeli Army. He was there in the 80s for the Lebanon War, but apart from a single image - three men emerging from the sea on the night of the Sabra and Shatila camp massacre - his mind's a complete blank. He travels the world looking for fellow soldiers who were over there with him: all of them have their own memories and their own gaps in them, but slowly a fuller picture emerges.

One thing I've not mentioned yet: the whole film is animated. This has become the main selling point of Waltz With Bashir, but to me it's no big deal. I see a fair few animated shorts every year, so I know that the idea of taking vox pop interviews and animating new visuals to them isn't new at all. (Think of it as a more violent and Semitic version of Creature Comforts if you like.) It's the first time I can recall this being done at feature length, though, as well as possibly being the first full-length movie made using the Flash-style cut-out animation that we've come to expect as standard on the Interweb.

It works, though,  because it's not really a documentary about the Lebanon war at all: it's about people's memories of it. Folman's main theme is the distance between Israel's mental image of the war and the harsh reality of it. As such, it's a mixture of flashbacks, dreams and hallucinations, all mashed up with the recreated footage of his interviewees. The only way all of this could mesh together into a coherent film is by using animation. The jerky look that After Effects gives to the imagery just emphasises how this is a film about the pictures we carry in our heads.  Folman admits that he doesn't have anything new to say about the war, but what he has to say about people is just as fascinating.