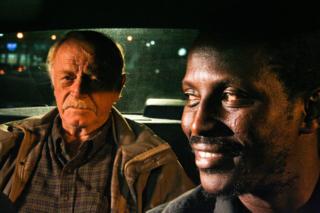 My first full day at this year's Festival commences with Max Fischer accidentally whacking me in the face with his swinging sack as he passes along the row behind me. Luckily, the day gets better from there.

Goodbye Solo is the third feature from writer/director Ramin Bahrani, and the third to play at the LFF. His first, Man Push Cart, impressed me a hell of a lot two years ago: I didn't get to catch last year's, Chop Shop, but Bahrani is pleased to announce both that and his new film have been picked up for British distribution by Axiom Films.

The new movie, like the previous two, tells the story of an immigrant's experience in America. Solo (Souleymane Sy Savane) is a Senegalese living in Winston-Salem, making ends meet as a taxi driver but studying for his dream job as a flight attendant. One night, passenger William (Red West) makes Solo an offer: a large amount of money for a driving job in ten days time, taking him to one of North Carolina's highest locations on a suspiciously one-way trip. As William makes his preparations for the journey, Solo attempts to find out exactly what he's let himself in for.

From the opening scene, where black Solo immediately picks up a hint of what white William is planning and tries to talk him out of it, it looks suspiciously like we're heading into magical negro territory: but, thankfully, Goodbye Solo is a bit smarter than that. As in Man Push Cart, there's a generosity of spirit and complexity to all his characters that makes them more than just archetypes. Solo may be charming and eager to help anyone he meets, but we're not allowed to forget that his motives for applying for the flight attendant job may not be as selfless as he thinks. Similarly, William's gruff exterior predictably breaks down as he gets to know Solo better, but the big moment of revelation comes in an unexpected way.

Both Savane and West give terrific performances: Savane gets the lion's share of the screen time, but West (a former Elvis bodyguard turned character actor) impresses even more with the face of a man who's seen too much in his life. The other star of the film is its look - Bahrani has a great eye for cityscapes, and his establishing shots of Winston-Salem by night combine desolated roads with harsh streetlighting to beautiful effect. It's a fine piece of work, and hopefully will move Bahrani from the festival circuit onto a wider stage. 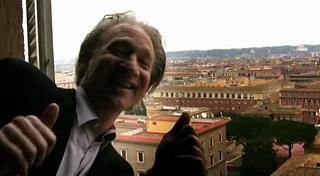 Documentary has become an increasingly important genre at the LFF over the past few years, so here's the first one on my list for 2008: albeit one from Borat director Larry Charles, so you know we might not be talking an entirely serious film here. Or are we?

Religious fundamentalism is obviously a hot topic at the moment. When we saw Richard Dawkins at Edinburgh last year, it was fun to contrast his logical debate-driven approach with that of interviewer Muriel Gray, who wanted to know what exactly was wrong with just calling religious people stupid. I'd imagine Muriel Gray would love Religulous, because that's pretty much the line it takes. Bill Maher tours the world - from the Vatican and the Wailing Wall, to an Orlando Biblical theme park featuring daily re-enactments of the crucifixion - and asks the big questions. Specifically, how did America get to the point where non-rational belief has become a pre-requisite for leadership? And why do the 16% of Americans with no stated religion have to put up with that? Isn't doubt a more sensible approach than absolute dead-set certainty?

These are questions that demand serious answers, but the current structure of American society and politics - which Larry Charles traces back to Jimmy Carter's success on a born-again ticket in the 70s - has created an environment where the questions can't be asked without people crying persecution. So Bill Maher takes the only option left open to him: taking the piss. All manner of dodgy tricks are used to make his interviewees look foolish - overdubbed sound effects, snotty subtitles, the inclusion of off-air footage, ironic inserts from other movies, and the classic Daily Show tactic of cutting in a silent reaction shot after a particularly harsh bit of questioning.

All of this manipulation is done in a fairly transparent fashion, and I think that actually makes it more acceptable. It points up that Religulous isn't attempting a serious even-handed debate of religious issues: it's a provocation intended to open up a forum where that debate can happen. And it does that in the context of a comedy movie that's got a fair few laughs in it. It's a big old blunt instrument of a film - at one point, a pastor suggests that a young man should turn his passion for women into a passion for God, which is followed by footage of a suicide bombing - but I suspect that right now, the faith debate in America isn't ready for anything more subtle just yet. 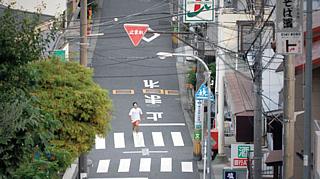 As Mr and Mrs Malcotraz noted when we bumped into them in the queue, it was probably inevitable that this one would be on our list. Tokyo! - and unlike last year's Let's Finish!!! debacle, I'm please to announce that the exclamation mark appears on screen as advertised - is a portmanteau film of three stories set in the city, each by a non-Japanese director with a distinctive visual style. Michel Gondry, music video whiz turned feature director: Bong Joon-Ho, the Korean whose Barking Dogs Never Bite and Memories Of Murder played so impressively at this festival: and Leos Carax, whose career has been in the Spinal Tap Where Are They Now File since Pola X nearly a decade ago.

On the evidence of the middle film in this trilogy, Carax will probably be remaining in that file for some time to come, because his Merde! is easily the weakest of the three. It starts off promisingly enough, as sewer creature Denis Levant rampages through Ginza accompanied by the Godzilla theme: but eventually he's captured, and we're forced to sit through endless bilingual courtroom scenes that refuse to go anywhere interesting. Apart from the long takes in that opening sequence, there's very little of Carax's expected visual brio on offer. And besides, the story doesn't really fit in with the other two, which are more controlled and surreal parables of alienation.

Gondry's segment, Interior Design, follows a young couple (Ayako Fujitani and Ryo Kase) as they search Tokyo for a new apartment, crashing at a friend's place in the meantime. Events conspire to put their relationship under strain, and eventually she cracks in a way that convinces you that yes, this is indeed a Michel Gondry film. The transition from quirky realism to, er, something else is beautifully handled, and like the best of the director's work manages to wring surprising emotion out of something that would sound ridiculous if I just wrote it down. (So I won't.)

Bong Joon-Ho, meanwhile, starts from a position of alienation and moves in the other direction. Shaking Tokyo's lead character (Teruyuki Kagawa) is what they call a hikikomori, a young man who's completely withdrawn himself from society. In real life most of these people simply hide in their parents' house, but our hero is pretty much self-contained: living in his own apartment, getting regular cash in the mail from his dad, and relying on telephone delivery services to provide everything he needs. And it all works just fine, until a particularly interesting delivery person (Yu Aoi) arrives one day with his pizza.

As with Gondry, Bong succeeds brilliantly at finding visual metaphors for emotional states, although the one hinted at in his segment's title is possibly a little too much on the nose for my liking. No matter: pretty much anything would look good after Merde, and it's a delightful finale to an interesting experiment overall. Astonishing to discover in the end credits, though, that one of the production companies involved belongs to 1980s DTV ninja Sho Kosugi.

Sorry about whacking you in the face with my dangling sack back there. At least it was almost empty.