Reviewed today: Arctic Monkeys At The Apollo, That Sinking Feeling. 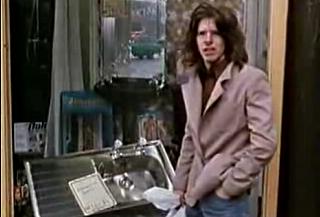 Here's the deal. I'm in Glasgow until Friday. There's no way that I can attend any events at the LFF today. So while I'm here, can the Glasgow Film Theatre act as any sort of replacement for the National Film Theatre? Well, actually, it can. The GFT may not have as wide-ranging a programme as its London equivalent, but it's had a couple of high-profile events during the week I've been here. Including a special screening of one of the great Glasgow films (despite the opening disclaimer quoted above), featuring a guest appearance from one of its stars. And only six quid to get in! To hell with your 'cheap' matinee vouchers, Hebron (well, for this week, at least).

That Sinking Feeling was made nearly thirty years ago. You might not be aware of it: but you'll definitely be aware of Gregory's Girl, the low-budget Scottish comedy that made the name of its director (Bill Forsyth) and a couple of its stars (John Gordon Sinclair and Clare Grogan). That Sinking Feeling was effectively the dry run for that film. Forsyth collaborated with members of a Glasgow youth theatre company, and between them they came up with a rough-edged movie that apparently only cost £6,000 to make. (Legend has it that when they redubbed the dialogue into non-Scots for American audiences, it cost more than the whole movie.)

Apart from the lucky few who happened to see it during its minuscule Scottish cinema release, most people (including Dep Downie of Monorail Film Club, who organised this screening) found out about That Sinking Feeling after the success of Gregory's Girl. So it's virtually impossible to watch it without comparing Gregory's fluffy romcom against Sinking's daring miserablism. The first ten minutes, where we meet five teenagers struggling to survive in hellish unemployment, has some surprisingly bleak laughs, probably peaking with the scene where three of them sit in a burned out car discussing possible ways of killing themselves. "There's got to be more to life than committing suicide," says Ronnie (Robert Buchanan), and he soon works out what that is: a daringly planned heist on a warehouse full of stainless steel sinks.

It's a much less polished film than Gregory's Girl ever was, inevitably: technically the sound is a bit dicky (with frequent use of dialogue-free scenes to get around that), the sets are incredibly basic, and some of the acting is more about enthusiasm than emotional truth. But the charms we came to associate with early Forsyth are already present and correct. After that glum start, the film slowly cranks up the silliness until by the end, we're perfectly willing to accept that a supporting character will wake up happily from his coma in 2068. ("The ring road'll be finished!")

Most of the cast of Gregory's Girl made their movie debuts here, with John Gordon Sinclair already proving himself to be a scene-stealer in a minor role. The lead character in the film is Ronnie, and actor Robert Buchanan delightfully turned up at the GFT for a post-film Q&A with Stuart Murdoch of Belle & Sebastian. He's barely changed, apart from (as he points out himself) the clothes and the hair being a lot more sensible these days. It turns into a gently nostalgic little discussion of the film, pointing out how few of the locations still exist and musing on where everyone else in the film is now. (Buchanan works in the theatre in Stirling these days: after a small role in Forsyth's Comfort And Joy he appears to have given up on movies altogether.) It's not a Guardian interview or anything, but it's nice to catch up with the guy after so long. 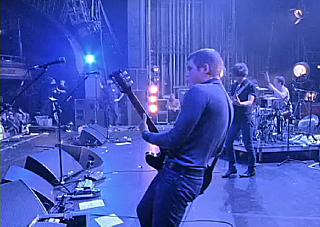 There are a number of reasons why I like the Arctic Monkeys: having 'monkeys' in their name is just one of them. I like that they've resolutely stuck to their local roots without compromise, making Alex Turner one of the few vocalists in the charts capable of making 'Mondeo' and 'say anything' rhyme. And I appreciate their respect for pop music history, one of the things that made people initially suspect they were just a sinister front for Jim Bob Carter or someone like that. The way that the video for I Bet You Look Good On The Dancefloor was a meticulous recreation of a mid-seventies Old Grey Whistle Test session. And, for that matter, the way they've handled the release of their first concert movie.

Back when I was a lad, before all these videos and DVDs, bands still made live concert films: it was just much more difficult to see them. Generally, cinemas wouldn't risk clearing out an entire week of their programme for one, so they'd just turn up in a one-night-only engagement in the middle of the week, when all the fans would traipse out to see Pink Floyd Live At Pompeii or something like that. And this is what the Monkeys have done with their own film, as a precursor to its DVD release in November: except their one-night-stand was on the same night across the entire UK (including the GFT, of course), with bonus screenings in Europe and even Japan.

They've also gone for a comparatively old-fashioned look in the film: the press release burbles on about "confidently held master shots" as if the lack of editing is supposed to be impressive in its own right. It's directed by Richard Ayoade - yes, Moss from The IT Crowd, although he's had previous experience directing both comedy shows and classy music videos. His recent work for Vampire Weekend marks him out as a bit of a control freak in the mode of Wes Anderson, and it's a similar approach that he's used in the Monkeys film: all long takes and slow camera moves.

You can see why they've gone down that road, attempting to evoke memories of classic concert movies like The Last Waltz and Stop Making Sense. But those films were documents of already visually interesting stage shows: with all the best will in the world, an Arctic Monkeys performance is nothing more than a bunch of Northern urchins standing around and playing guitars. Musically, the band sound just fine, playing virtually all your favourites from the first two albums. And the music mix is crystal clear, with every word audible (including the "fuckin' freezing" line in When The Sun Goes Down, which the BBFC seem to have missed when they gave the film a PG certificate). But the locked-down visual approach sucks all the life out of the performances. It starts memorably, opening on Matt Helders' back as he thunders into the drum intro of Brianstorm before slowly circling round him: but after a while, it becomes apparent that the slow circle round is the only camera move Ayoade has in his armoury.

It's also a mistake, I think, to almost completely remove the audience from the film (apart from as background detail in some shots). They've been pushed so far down in the audio mix, that on the few occasions when the band milk a mid-song pause for maximum tension before carrying on, it just sounds like they've forgotten what the next chord should be. Frustratingly, there are a few hints of what this film could have been like if Ayoade had loosened up a bit (notably a surprisingly disruptive bit of editing in the final minutes): as it is, the form works against the music to the detriment of both. Still, it's not that often I can put an Amazon link into an LFF review, so...