Reviewed today: All Around Us, The Candidate, High Treason, Still Walking. 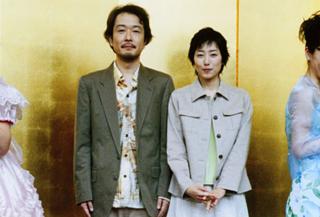 Here's a thing. By the end of today, we'll have seen four Japanese films over a period of just under 36 hours: and Susumu Terajima will have appeared in three of them. Terajima is one of the great Japanese bit part actors, who's been in 98 films to date if you believe the IMDB. He first came to my attention as a regular feature in Takeshi Kitano's movies - that's still the case as recently as yesterday's Achilles And The Tortoise, where he pops up for one scene to accuse Kitano of being a male prostitute. He's got a similar relationship with other directors such as Hirokazu Kore-eda (more of that later), and pops up in Japanese films like there's some sort of law that says he has to be there. He's always fun to watch, and deserves saluting. So consider this a salute.

Terajima's got a slightly bigger role in All Around Us than the usual one-scene cameo we've come to expect. Written and directed by Ryosuke Hashiguchi, it looks at one decade in the lives of the couple Kanao (Franky Lily) and Shoko (Tae Kimura). Kanao holds down a job as a shoe repair man in the absence of anything better, while Shoko works at a publishers. As the film opens, there are changes taking place in both their lives: Shoko is pregnant with the couple's first child, while Kanao has taken a new job as a courtroom illustrator, giving him a front row seat at some of Japan's most unpleasant trials. We follow them at regular intervals over the next ten years to see how all that works out for them.

The first section of the film is a delightful bit of comedy, setting up the contrasting characters of the couple: Kanao's compulsive flirtations with other women, and Shoko's need to control absolutely everything, including the frequency of their lovemaking. But in between the first and second chapters of their story, there's a major dramatic event, and pretty much all of the rest of the film deals with the ripples resulting from that. For me, the earlier funny section is the best bit of the film, but it sneakily does the job of racking up your sympathy for the couple so that when bad things happen, you're with them all the way hoping they'll pull through. Beautifully detailed performances from Franky Lily and Tae Kimura definitely help on this score, with entertaining comic support from the likes of Susumu Terajima as Shoko's brother Katsutoshi. 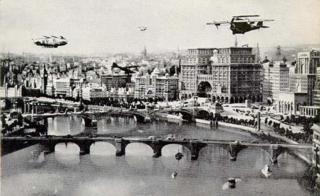 It's always fun to watch a film knowing you're seconds away from where it was shot. It's happened a few times in my life: watching King Kong in a cinema just down the road from the Empire State Building, or The Apartment literally eight doors away from the apartment, or any London film with an establishing shot of Piccadilly Circus that I've seen in the West End. I can add another one to the list now, after this year's programme of silent films shown on an inflatable screen in Trafalgar Square.

You can see why Gaston Quiribet's The Fugitive Futurist was an ideal choice of supporting short: a 1924 showcase for the state-of-the-art effects technology of the time, it takes a guess at what various London landmarks will look like in the future, and includes a shot of Trafalgar Square flooded with water. For added irony, this is of course the point where the heavens open over the audience gathered to watch all this.

Still, the rain doesn't shake us off, nor does the collection of drunks and loonies that any free open-air screening is bound to attract. One of them mumbles aloud that everyone watching the film is mentally ill, while another one appears to be standing in front of the unluckier members of the audience and attempting to tap-dance the Gospels. We stay put with our takeout from Hamburger Union, and are rewarded with a peculiar little gem of a main feature, accompanied (like the preceding short) by the dramatic piano of Neil Brand.

Maurice Elvey's High Treason dates back to 1929, and again postulates the world of the future: 1950, in this case. Europe and America are on the brink of war, one which could easily be the worst war since 1914 (yeah, yeah, I know). Little do the superpowers realise that Paid Agitators are secretly playing off both sides against each other for their own financial gain (and getting paid in used £1000 notes, no less). The only hope for preventing war comes from the World League Of Peace, an organisation based in London (naturally) and run by a father and daughter team. But the daughter's boyfriend is in charge of Bomber Command, so domestic battles are sure to accompany the larger-scale ones.

Part of the fun of High Treason, as you'd imagine, comes from seeing how wrong its predictions of life in 1950 are: but the big surprises come from the bits they actually got right. Communications over television links: dancehalls accompanied by a single musician: the horrors of aerial bombardment: even their guess at rail travel through the Channel Tunnel is close to today's reality, apart from the tunnel itself having the words CHANNEL TUNNEL in lights over the entrance like a cheesy nightclub. It just makes the wrongness of their other predictions even more charming, from the London skyline buzzing with planes to the terrible futuristic clothes. It's fun to observe that their version of London in 1950 looks like 1920s New York, while their version of New York in 1950 looks almost exactly the same.

The most astonishing thing of all, however, is the way the plot is ultimately resolved, and the radical solution that's taken to prevent war between the superpowers. There's all sorts of moral agonising after the fact, but it really does appear that High Treason is proposing the assassination of politicians as a way to bring about peace. How come Battleship Potemkin was banned until 1954, but this subversion got away with an A certificate? And why can't you find that certificate on the BBFC database, even though it's perfectly visible on this print? Was the fact that it was written by a British MP (Noel Pemberton Billing) anything to do with it? 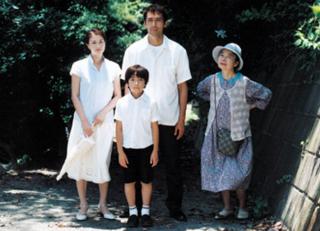 Another slice of contemporary Japanese life to finish the day: this one's by Horozaku Kore-eda, returning to his usual comfort zone after a brief digression into samurai comedy in Hana. Still Walking takes place over a single day, as three generations of the Yokoyama family have a reunion at the grandparents' house. Number Two Son Ryota (Hiroshi Abe) is a restorer of paintings (on the evidence of the last two days' films, everyone in Japan works in art now). It's a source of displeasure to his father Kyohei (Yoshio Harada), who wanted him to carry on the family line in medicine. On top of that, Ryota is still living in the shadow of his older brother, who's been dead some twelve years now: and his marriage to Toshiko (Kirin Kiki) hasn't helped endear him to the rest of the family.

As Kore-eda says in his programme note, this could easily be the sort of family drama that you could see on TV any time: and shamefully, the one comparison point that came to my mind while watching Still Walking was You Can Choose Your Friends, a Richard Herring one-off play that was on ITV last year. Herring used a similar setting to depict realistically uneventful family life, but couldn't resist the temptation of throwing in hints of there being something nasty going on under the surface - albeit as an attempt to subvert the expectations of the ITV viewer, by having all those hints come to nothing in the end.

What makes Kore-eda a genius is that he doesn't need to do that. (Or pad out his script with Herringesque knob jokes, for that matter.) Without any manipulative moments of high drama, he makes this a thoroughly engrossing story, one in which we can recognise ourselves and the way we'd behave. The tensions within the various branches of the family come out in quiet asides, rather than huge speeches to the gallery. There's an overall warmth that reassures us that despite their differences, these are people who want to make it all work between them. Generally, films based around a social gathering make you glad at the end that you weren't there: this does precisely the opposite.

At the halfway point of this year's LFF, this is easily the best film I've seen so far. As with last year's favourite, The Edge Of Heaven, I'm struggling at this stage to say much more than "it's really, really great," so that's probably a good sign. Come back for the Wrap Party, and I may have a more coherent rave for you then.

(And in case you were wondering, Susumu Terajima plays a sushi chef in this one.)

The Cineaste - Sarah Lutton introduced proceedings, declaring that this was one of the best European thrillers/noirs she’d seen for some time, “which is certainly saying something, as I’m a big fan of this genre.”

It starts with the main protagonist, Jonas, a lawyer by profession, and his dad (ditto) achieving a guilty verdict in the prosecution of a man accused of murder. This was certainly not the verdict the accused was expecting, and it turns out to be the cue for things to start getting rather awkward for Jonas. Without giving too much (or indeed very little) away, the film then developed really quite stylishly. Events happened around Jonas that he was barely able to comprehend, and just when he thinks he’s got a handle on the situation, another course of events turns everything pear shaped. The pace of the film kept moving forward impressively (early on there was a situation I thought was there just for stylistic padding, but turned out to be very pertinent to the plot), and impressively there were periodic twists and turns just when you least expected them, utterly unpredictable. The camera-work was an integral part of creating the tension, and overall I thought this was a classy film.

Afterwards director Kasper Barfoed affably held forth about some of the themes he intended to communicate, a principal one being a study of Jonas’ responses/reactions when he was put in threatening situations (although at one stage it all got a bit technical, with some anorak asking about camera sizes and lens ratios), and deservedly got a warm ovation. Nothing was mentioned about a UK general release, but this film deserves to get one.

Still Walking is the second Japanese film in a row I've seen with a painting restorer character, after The Girl Who Leapt Through Time.