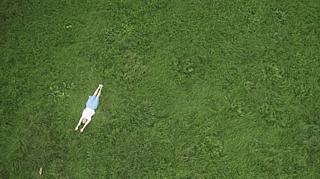 "You missed one." That was how The Belated Birthday Girl announced last week that our plan to see all the Japanese films in this year's LFF wasn't quite as well thought out as we'd hoped. Easy to see how it happened, though: this double bill was tucked away at the end of the Experimenta section of the programme. The only timeslot that worked was on an afternoon when The BBG was back at work, so that's how I've ended up at this one on my own.

Strictly speaking, I'd missed two, because this programme consists of a short feature preceded by a lengthy short. The 30 minute opener, Babin, is a minimalist one-joke affair built around the Beckettesque image of a man (Keisuke Horibe) buried up to his waist in the middle of a forest. We're never quite sure if he really is a man, or a tree with more personality than most: but we get to hear him bitch and moan as small boys play on him and naturalists examine him while tutting loudly. As basic as it is, writer/director Isamu Hirayabashi keeps it inventive enough so that it doesn't outstay its welcome.

Yah Chakya! is a much more leisurely affair, running for an hour but containing no more than five minutes of plot. Shogo (Teruyuki Kagawa) is the sort of male lead that would irritate The BBG's former Japanese teacher, who would frequently complain that there are far too many suicidal characters in Japanese cinema nowadays. However, Shogo is saved from his tragic fate by Nina (Machika Ono), an astronomer who's seen some tragedy herself. The two make a connection with each other, and that's about it for the story really.

It's all in the telling, of course, given that we're in the Experimenta section here. The writer/directors are a lyricist (Wakako Kaku) and a poet (Shuntaro Tanikawa), and this is obviously their attempt at producing a filmic poem. The only sounds we hear are the narrator telling the story, and Megumi Maruo's perky score: the visuals are almost entirely made up of still photos. It's a technique that worked magnificently for La Jetée, and as in Chris Marker's film the most moving moments of Yah Chakya! are the ones that briefly move. (Including the one that explains what a Japanese film is doing with a Russian title.)

It's a small, exquisite piece of work, which forces the viewer to slow down to its glacial pace to appreciate it best. Unfortunately, I had some work-related stress dropped on me literally five minutes before the start of the screening, so I was too tense to make the metabolic change that the film demands. Which is a shame, because I imagine that if I had, I'd have been much more relaxed afterwards. 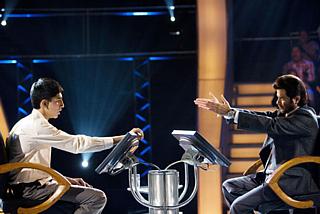 And like that, it's all over again for another year. The Belated Birthday Girl puts on her best Issey Miyake togs, and graciously accompanies me down the red carpet in my Mister Byrite suit. We settle down in our unfeasibly good seats in the middle of row A of the stalls, and watch the live video feed of Jason Solomons outside the cinema, as he  discovers that in this freezing weather none of the starlets in skimpy dresses want to stop and talk to him.

The entertainment proper starts with the traditional sound of Donald McKenzie on the mighty Compton organ, and three cheers to the man for wittily winding up his medley with Who Wants To Be A Millionaire? Amanda Nevill delivers her wrapup speech, boasting that thanks to the LFF she now knows the meaning of the word 'synechedoc'. (Though not the spelling, apparently.) Sandra Hebron swaps her fetish boots for red high heels, and hands out all the Festival awards to films we didn't see (Tulpan, Three Blind Mice, Victoire Terminus and Mid-August Lunch winning the Sutherland, FIPRESCI, Grierson and Ray respectively). Danny Boyle eventually drags most of his cast and crew onto the stage for a quick wave, and the film can finally start.

Jamal (Dev Patel) grew up in the slums of Mumbai. Nobody ever assumed he'd amount to anything: currently he's the tea-boy in a call centre. So what's he doing on Who Wants To Be A Millionaire, just one question away from winning the top prize of twenty million rupees? Show host Prem Kumar (Anil Kapoor) has his suspicions, and Jamal suddenly finds himself in a police interrogation room being forced to explain himself. It turns out to be a long story, one which goes all the way back to that childhood in those slums, and which takes in his brother Salim (Madhur Mittal) and his sweetheart Latika (Freida Pinto).

Somehow, I'd got the idea that Slumdog Millionaire was based on a true story. I'd recommend you try to watch it in the same way: it's fun feeling your brain trying to work out how on earth this could happen in real life. In fact, realism isn't really an issue here. Simon Beaufoy's script (like, presumably, Vikas Swarup's source novel Q&A) makes ingenious use of Millionaire's format as a structure which allows Jamal's backstory to be teasingly revealed one bit at a time. It's a terrifically corny narrative device if you give it a moment's thought, the sort of thing that Bollywood cinema uses all the time: to make it work in a Western movie, you'd need to take it entirely seriously and never crack once.

Luckily, that's exactly what Danny Boyle has done. (And good on him for giving his main liaison in India, Loveleen Tandan, a full co-director credit.) Rather than treat this as some sort of airy-fairy fable, he's given it the same full-on attack as his other movies set in big cities, like Trainspotting and 28 Days Later. He starts off early with a high-speed foot chase (beautifully shot by Anthony Dod Mantle), and keeps his usual energy going throughout.

Just because Boyle's taking the story seriously, it doesn't mean he's not going to have fun. And Slumdog Millionaire is great entertainment from start to finish, even though it has some hard things to say about Indian society along the way. Each of the three main characters is portrayed at three different ages, and all of the young actors are terrific. The result is a cleverly balanced mix of Indian and British influences, and the final nod to Bollywood in the end credits (with a little help from legendary composer AR Rahman) tops this whole Festival off very nicely indeed.

If you want an overall summary of how LFF 2008 went, it's now available in The Wrap Party.

Suzanne Vega Fanclub - Oh that Richard Jobson, do you know I have always wondered about what happened to him after the Skids broke up. Well he makes films apparently. Anyway I am sure those of you well up on this sort of thing can give me his complete career breakdown. [Funny you should say that - Spank] So for those of you who do make such notes, he both wrote and directed this one.

Now Jobson was introduced onstage prior to this screening by Morrissey Light, and proceeded to give us a run down of what was coming up, cleverly linking it all into the current media theme of people who are so arrogant that they think they can do whatever they like. However he did say he would not be doing a Q&A afterwards (or ever again) after a member of the audience at the previous screening told him that the film was government propaganda, and that he was having a homosexual love affair with Gordon Brown. For my part I can't see the connection of any of that with the film, but it does go to illustrate the democratic nature of the London Film Festival whereby anyone can buy a ticket.

Set in the underclass streets of Edinburgh, the film follows teenager Sean whose elder sister (probably a smackhead) is in to her creditors to the tune of twelve grand. She has been given a choice, come up with all the money yesterday or go to Amsterdam and pick up a little package for them instead. With Sean desperate to resolve this one for her, help arrives in the shape of two city broker types who are prepared to give him all the money he needs. All he has to do in return is hide for a night between the hours of 9.00pm and 9.00am while they attempt to hunt him down (for sport) and kill him.

Now not a particular original idea, and we have all seen the hunter and hunted format plenty of times before (haven't we Sarah Connor). However there is a raw punkish energy to this (must be those Skids memories) that keep you watching and intrigued as the chase runs around the back streets of Edinburgh. In fact there is quite a lot of city street running going on, reminiscent of that underrated classic Run Lola Run. Where the film ultimately falls away, is at the end when night becomes day and the location goes upmarket and indoors. However some interesting set pieces before then which at one point had a guy sitting behind me shout out loud "Shoot the bastard". Not I'm not sure myself what sort of distribution deal a low budget thriller like this gets these days. However I am sure it will pop up some time on Film 4.

Oi whaddaya mean it's the end of the festival, I've only just got here.

That doesn't even make sense. Don't you even proof read this stuff ? There goes your chance of being controller at Radio 2