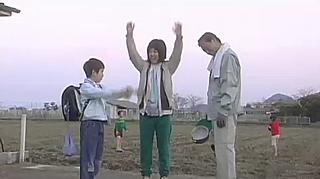 I think it's safe to assume that German + Rain is probably going to be the least conventional of the Japanese films we see this year. It has the feel of a made-for-home-video production - a running time of just 72 minutes, a 4:3 aspect ratio, and a healthy vein of couldn't-give-a-toss attitude running all the way through it. It's built round an extraordinary performance by Yoshimi Nozaki as Yoshiko, a sixteen-year-old girl living on her own after the separation of her parents. She's not very bright, but has plenty of enthusiasm when it comes to her key interests in life: running a highly informal recorder school for children, hanging out with a cute German boy in her part-time gardening job, writing songs for her planned pop career, blackmailing sewage workers. The usual sort of thing.

The Japanese do love their stories about outsiders, I've found. And part of the fun of Satoko Yokohama's debut as a writer/director is watching all the ways in which Yoshiko transgresses the norms of Japanese society, particularly those relating to a girl who's just left school. There are quite a few dull bits, despite the short running time, and some howlers in the English subtitles which actually hinder the narrative (such as a reference to finding 'pill bags' on the ground, which you find out much later on was supposed to read 'pill bugs'). Nevertheless, Nozaki's performance is a hoot, and she manages to single-handedly drag the story through its longeurs with her wild mood swings and disregard for convention. It's a very odd film overall, but engagingly odd, as opposed to the irritatingly odd of Under The Tree yesterday. 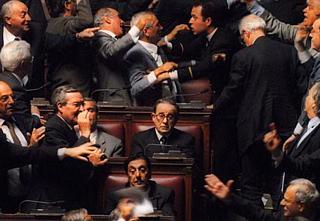 An appearance from another one of the LFF's pet directors, Paulo Sorrentino: and because he's Italian, he gets an introduction from former Festival boss Adrian Wootton, who's starting to look disturbingly like a Not Quite So Low Fat Al Gore these days. This is Sorrentino's third consecutive appearance at the Festival, after The Consequences Of Love in 2004 and The Family Friend in 2006, both of which were stories centred round an enigmatic and slightly unpleasant old man. And the same applies to his new film.

As enigmatic and slightly unpleasant old men go, in Italy they don't come any bigger than Giulio Andreotti. Seven times Italian Prime Minister, his political career spanned several decades and was continually dogged by controversy. Italian politics always appears to have a whiff of scandal to it, but Andreotti had an entire cabinet full of chancers and crooks, and all of his enemies seemed to conveniently die whenever they got too close. The stories about the man are legion, and wildly contradictory: Sorrentino's almost impossible task is to try and distil all of those stories, rumours and whatnot into a coherent two hour film.

He's done it by cranking up the style that was so impressive in The Family Friend to incredible levels: the result is a biography of a still-living political figure that's shot and edited like Goodfellas. It starts at full tilt, with a montage (cut to a Eurodisco track by Cassius) of all of the political assassinations that occurred during Andreotti's time in power, full of darkly witty touches such as the shot of the hanging Roberto Calvi rotating through 180 degrees. Captions are used heavily to identify the huge number of key figures in the story: unexpected music selections erupt from the soundtrack: and Luca Bigazzi's camera flies at full speed through the action, trying to keep up.

The result is a breathtaking cinematic experience: comparing it with Scorsese isn't an idle boast. And Toni Servillo, who was the enigmatic and slightly unpleasant old man in The Consequences Of Love, gives a brilliantly controlled central performance that holds all the disparate elements of the film together. Nevertheless, for those of us who don't have an in-depth knowledge of the last few decades of Italian politics, it's hard work trying to keep up with all the names and events that are hurled at you at high speed - though, crucially, it's not impossible. But there will be two audiences watching this film in the UK: the ones who know where it's all going to end up, and the ones like me who'll won't find out until the credits roll. And for those of us in the second camp, it's not until the end that you realise what a spectacular balancing act the film's managed to pull off. 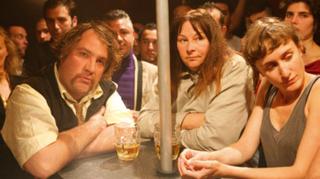 We last met writer/directors Benoit Delepine and Gustave Kervern in 2004, when they brought over Aaltra, the touching story of two men travelling to Finland to demand compensation after a tractor accident that left them both in wheelchairs. I raved about it at the time as a typically dark Belgian comedy: in fact, as Kervern reveals in tonight's post-film Q&A, they're actually French, but pretend to be Belgian sometimes to make people like them better. Anyway, they're still mining comedy from the least likely of subjects, as Louise-Michel demonstrates.

When the bosses of a smalltown factory do a moonlight flit, their female workforce is left jobless and with twenty thousand Euros of redundancy pay between them. They decide to pool their resources and spend the money together, and it's Louise (Yolande Moreau) who comes up with the most constructive suggestion: hire a hitman and have their boss killed. Louise has underworld contacts from her earlier life, but she eventually stumbles across security guard Michel (Bouli Lanners), who has a large collection of firearms and an ingenious web of subcontractors he can use to do the dirty work. Louise and Michel were meant to be together: after all, they both have a similarly large secret in their past.

Aaltra was a ragged string of loosely connected jokes, filmed on a low budget in black and white. Louise-Michel is a step forward in pretty much every department: although it ends up being an international road movie like the earlier film, its plot is more coherently structured, with a quiet political subtext bubbling away throughout. (Put together the names of the two lead characters as in the title, and you get the name of a 19th century French anarchist.) And the jokes are funnier and blacker than ever before. The film starts with a blissfully comic funeral scene, the sort of safe black humour that's generally acceptable: but as it progresses, it goes well beyond the boundaries of acceptability on at least two or three occasions.

It's hard to say how this all manages to remain funny: and I know for a fact that to some people, it isn't. It may well be that on a simple primal level, some of us have reason to find the post-redundancy assassination of managers funnier than others do. But if you fall into that category, you'll find Louise-Michel has all the wrong fun you can handle, if not more. Amusing to see, though, that four years after that LFF screening of Aaltra, Kervern still can't run a post-film Q&A session without it descending into an anarchic ramble.

The Belated Birthday Girl - This one made it onto my list in part as a convenient slot, as I was going to be at the ICA for German + Rain beforehand, but also because I like to take in a few documentaries during the LFF, and have had quite a good hit rate from them over the years. I'm not especially knowledgable about the "Do It Yourself" art scene which is the subject of the film, and Harmony Korine is probably the only name I was familiar with of the collection of artists of various forms featured (and I've never seen any of his films).  But that lack of familiarity was not a problem, and the film just put lots of ideas out there, pretty much like the art, and is entertaining and accessible.

Although there was some chronological structure to it, describing how the artists started out, when little more than kids, just hanging out, skateboarding, and getting into graffiti and tagging, and then gradually moved into a gallery pulled together by Aaron Rose, one of the co-directors of the film, and showing how now many of them are established artists, often working in the commercial world, it was also just showing us the art and the artists, and how they are still having fun and just doing the same things, only grown up.

The Belated Birthday Girl - This started out well, with some beautifully black humour in a funeral parlour, but unfortunately it lost me early on, and it just never got me back. Although there was promise in the set-up of the factory women hiring a hit-man to kill the boss who has just closed their factory, from the moment Michel was engaged for the job (and in fact from slightly before), the level of absurdity of the gags was pitched too high and was in its way completely predictable. There were also moments which were only in there to say "Look - I'll break any taboo, I'm so kerrazy!". I remember liking Aaltra - and the fact that I did is even documented here - but this one didn't work for me, and I may be more wary next time they bring a film here (but I might still give them another go...).