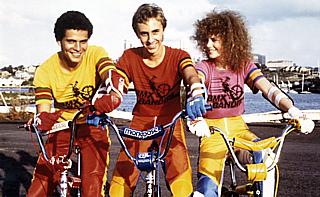 1.30pm: Not Quite Hollywood (official site)

Ozploitation, anyone? It's not the most elegant term for the Australian exploitation film industry, but it's the best one we've got. As Low Fat Morrissey says in his introduction to this screening, this documentary is ideal for festival screenings to audiences who love film no matter what sort of morally murky depths it comes from. Nevertheless, he can't quite muster up enough enthusiasm to make his promise of "boobs, pubes and tubes" sound convincing.

Mark Hartley's film comes in three neatly arranged chapters, sorted roughly by genre. At his starting point of the early 1970s, Australia had no film industry of its own - just foreign directors like Michael Powell and Nic Roeg who'd come over from abroad, use their scenery and bugger off again. These visitors at least showed that it was possible to make films in the country, and slowly but surely comedies and sex romps became the lifeblood of the emerging industry. Many of the ruder films suffered from the wrath of the Australian censor: Barry Humphries (who wrote the Barry McKenzie ocker comedies) tastefully suggests that this was down to the censor's frustration at only having one arm. The other two chapters follow the subsequent phases of the industry: first the move into cheap gory horror flicks, and then into the sort of action pictures that would eventually get international acclaim thanks to Mad Max.

Hartley uses copious clips, all of which have been remastered from the original negatives and look as good as they must have on the day of release. He's also tracked down a huge number of cast and crew members from the movies, all of whom have great stories to tell. Producer Antony I. Ginnane, the Roger Corman of Down Under: director Brian Trenchard-Smith, happy to work in any genre that would make money (that's a teenage Nicole Kidman in his 1983 BMX Bandits in the picture above): cinematographer John Seale, who moved on from stuntman exploiters like Deathcheaters to an Oscar for The English Patient: and many, many more.

If there's a flaw with Not Quite Hollywood, it's the lack of voices outside of the people who worked on these films - a proper fan's perspective on why they were so popular. Quentin Tarantino tries to take on that role here, but he's done so many interviews boasting about the exploitation flicks he's seen that his opinion doesn't really count for anything any more. (I genuinely expect him to turn up on ITV one day talking about how great the Carry On films were.) There are some lovely interjections from a couple of grumpy Oz film critics, but some perspective from outside the industry would have been nice. That aside, it's a handy overview of a genre I only had passing familiarity with before today, and it's made me keen to track some of the original films down. 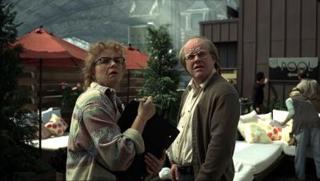 This is the first of two nights I'll be spending with Charlie Kaufman. He's written some of the most berserkly original screenplays of the last decade - Being John Malkovich, Eternal Sunshine Of The Spotless Mind, Confessions Of A Dangerous Mind - so inevitably, there's a lot of interest in his directorial debut. Without wishing to commit to an opinion in paragraph one, I will say this: in twenty years of attending LFF screenings, this is the first one where I've heard someone yell out "Rubbish!" during the closing credits.

Synecdoche New York (pronunciation tip) follows the midlife crisis of theatre director Caden Cotard (Philip Seymour Hoffman). His wife Adele (Catherine Keener) is drifting away from him into her own artistic career: his health is deteriorating in alarming ways: and his theatre work is stuck in a rut of Arthur Miller revivals. At his lowest point, he becomes the unexpected recipient of a 'genius grant', a huge amount of money allowing him to develop the theatrical project of a lifetime. Works of art that emerge from a midlife crisis are always a dangerous thing: a work that involves the construction and population of a real-time simulacrum of New York City in a gigantic warehouse may be more dangerous than most.

This is about the point where you realise that for all his originality, Charlie Kaufman's original screenplays tend to follow a very similar format. There's a slow buildup to the revelation of a Big Surreal Idea (taking a ride inside John Malkovich's head, having your bad memories of a former lover erased, and so on), and then the rest of the film works through all the implications of that Big Surreal Idea to some sort of conclusion. Synecdoche follows that formula, at least initially: the throwaway visual hints of the chaos to come in Caden's life are neatly handled, and once we're inside that warehouse the layered Chinese box structure builds in an entertaining fashion.

But then it keeps on building and refuses to stop. Layer upon layer of stuff is hurled on top of an already complicated structure, without any apparent relevance to the film other than to emphasise its own complexity. By the end, the story has completely imploded under the sheer weight of ideas and characters that have been introduced without any attempt to tie them together. More unforgivably, the intellectual framework of Kaufman's earlier films was always there to lead towards an emotional resolution, and that simply doesn't happen here. As The Belated Birthday Girl noted, quite a few characters die in this film, and you'd expect their deaths to make you feel something: here, death is just another plot point to hit before moving on to the next one.

I wouldn't go so far as to say 'rubbish': the cast (featuring everyone who's been in a quirky indie movie in the last ten years) gives it their all, and the first half at least has everything we've come to know and love from Kaufman's screenplays. But it's hard not to look at the evidence of Synecdoche New York and come to the conclusion that Kaufman needs an outside director to tell him when to stop.

Suzanne Vega Fanclub - Oh dear, that's two hours of my life lost that I will never get back. My fault I suppose as when I booked it, I assumed with Mark Ruffalo and Adrien Brody in the cast, it meant that this was a Kosher production. Unfortunately I didn't notice that Rachel Weisz was also in there somewhere, which meant I had inadvertently violated one of the golden rules of cinema namely: 'Never watch anything with Rachel Weisz in it, because it will always be a crock'.

Anyway brothers Ruffalo and Brody are two grifters who have been conning people since childhood. Brody decides he wants out, but not before Ruffalo has talked him into one last scam involving poor little rich girl, you know who. Well that's as coherent as it gets, as nothing makes sense in this movie; not the dialogue, characters, plot or the cons themselves. Even one trick pony Robbie Coltrane pops up for five minutes impersonating a Frenchman, but what on earth for one can only guess. The other piece of guesswork required is to wonder what this is all hanging on anyway: a screwball comedy, a melodrama, a road movie, action adventure (Snore ZZzzzzzzzzzzz).

That said everyone involved seems incredibly pleased with themselves to be in such a clever clever production, but the real con here is getting a cinema full of punters to part with their money for such absolute drivel. Still it must be getting near Christmas if the Film Festival can serve up a Turkey like this.