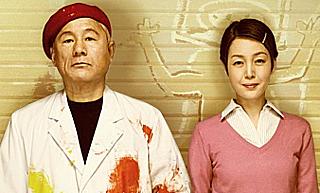 You do worry about Takeshi Kitano, don't you? Well, I certainly have done for the past few years, since he released Takeshis' in 2005: a rampantly self-indulgent mess, which looked like disturbingly like a mid-life artistic crisis committed to celluloid. Little did we know at the time that it was going to be the start of a trilogy. Theoretically, Takeshis' was Kitano musing on the nature of fame, while last year's Glory To The Filmmaker! looked at the problems of being a director. Now, Achilles And The Tortoise (hopefully) wraps up Kitano's navel-gazing by studying art and artists in general.

Kitano recycles an amusing bit of visual shorthand from Hana-Bi here. You can tell that the young Machisu (Reo Yoshioka) is going to be an artist, because as a young boy he's been given a beret to wear. (It's never explicitly stated, but there's a faint possibility that it might be the only reason why he's an artist.) The film uses three actors to depict Machisu throughout the main stages of his career. The young boy who's driven to paint, even in the face of family upheavals: the teenager (Yurei Yanagi) who refines his craft at art school: and the middle-aged man (Kitano himself) struggling to make a living, with only the approval and assistance of his wife Sachiko (Kanako Higuchi) to keep him going.

It's very much a film of three distinct acts, but those acts happily show Kitano playing to his acknowledged strengths, and not just goofing off in the post-modern comic rut he's been stuck in for the past few years. For my money, the opening section is the weakest of the three - he establishes the character of the young Machisu with his usual skill, but pushes the emotional slushy buttons a little too much for my liking. Once Machisu gets to art school, things perk up immensely, with some smart commentary on the nature of art and commerce. This carries on into middle-age, with Machisu's hopping from one artistic genre to another recalling the directoral crisis that drove the plot in Glory To The Filmmaker! Here, however, Kitano appears to have got his comedy mojo back, and delivers a series of tightly-constructed vignettes rather than the lazy InsertGenreOfMovieHere Movie-style spoofs of the earlier film.

To some degree, this could be considered Kitano-by-numbers: it does all the things you used to expect from his films, but keeps them all in separate compartments rather than mixing them all in the same scene like he used to do. It feels like a very deliberate attempt to get back to the stuff his audiences like, to the extent that he's blatantly asked Yuki Kajiura to compose a score exactly in the style of his former collaborator Joe Hisaishi (who Kitano once claimed in an interview is so expensive now that only Hayao Miyazaki can afford him). But for the first time in five years, we actually have a Kitano film that you can watch and get a reasonable amount of enjoyment from. I said a few months ago, when I reposted my review of Hana-Bi, that I hoped Kitano still had another great film in him: I'm a bit more confident of that now. 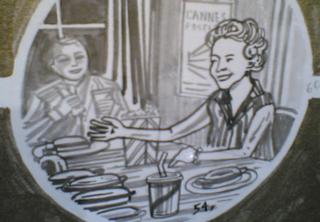 Only two films today - but the second one's over three hours long and set to take up our entire evening, so I think that's justifiable here. We spend the three hour gap between the two films taking advantage of the facilities at BFI Southbank, primarily a leisurely lunch/dinner at the newly reworked benugo riverfront bar and kitchen, followed by coffee and lounging around in armchairs in the main bar.

While we're hovering around the foyer, I finally take the time to take a look at a large piece of artwork that was recently installed there. And it's great. In all the time I've spent in the BFI Southbank foyer over the past week, I don't think I've seen a single person give it the time of day, so I've decided it's my duty to draw your attention to it. (It's in the foyer directly across from the entrance to the Gallery, you can't miss it.)

The story is this: as you may or may not be aware, the British Film Institute celebrates its 75th birthday this year. A series of events has been held to commemorate this anniversary, and Adam Dant's Anecdotal History Of The BFI is now officially my favourite of them. On a huge canvas, Dant has drawn a series of 212 interlinked cartoons, each one depicting something that happened in the BFI's 75 year history. Some of these are major events, others are tiny stories gleaned from interviews with staff: Dant grants them all equal importance, and gives each one a deadpan label baldly stating the facts, no matter how inconsequential. (Number 106: "Gene Kelly delivers the first Guardian Lecture at the NFT to 1000 people. 2000 more are turned away." Number 105: "1982. Finding his driver absent, Richard Attenborough drives the Roller home himself.")

There's something very British about the dry wit of the captions, which can be seen on a handwritten list to the right of the display or in a printed booklet available to the left of it. And the wit extends to the sheer amount of comic detail crammed into the art. Take number 54, detail shown above: "1956. The idea of a London Film Festival appears over dinner at Dilys Powell's house." It wasn't until I got my cameraphone photo home and blew it up that I noticed just what Dilys appeared to be offering her cineaste chums for dinner. And I suspect there are similar delights buried in the other 211 images.

Best of all, the images are displayed in non-sequential order. You can spend ages picking out an interesting caption from the list and finding the picture to match it, or work the other way round. Either way, there's a lot of fun to be had with this picture, and if you've got a few minutes spare in the BFI Southbank foyer you really should give it a look. 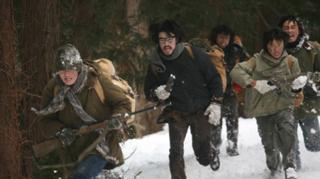 No, it's not what you think.

I mentioned yesterday how The Belated Birthday Girl and I plan to see every Japanese film in this year's LFF between us (even the experimental one we only discovered in the programme several hours after I wrote that). But as you're probably aware, The BBG has already seen a dozen or so new Japanese films this year, during her three month stay in the country. So we were expecting that at least one of the ones she'd already caught in Japan - possibly even The Magic Hour, which was her absolute favourite - would turn up at the LFF, complete with subtitles so she could confirm she'd understood it properly.

Surprisingly, there turns out to be no overlap between her Japan trip films and the LFF programme - apart from this one, almost. During our visit to Hakodate at the tail end of the trip, we checked out a cool-sounding indie cinema called Cinema Iris, hoping to watch something there during the one day we were in that part of town. Sadly, the only film we could fit in was United Red Army, and the only information we had on it was a poster in the cinema window. From that, we could gather it was somehow based on history, it featured people with guns walking through the snow, and - crucially - it was three and a quarter hours long. We couldn't even work out if it was a documentary or not, and didn't think it was worth the risk of struggling through such a long movie without subtitles.

Thank God we saw it now rather than then, otherwise I think we'd have assumed from the unsubtitled version that it was a movie about young people having a really crap holiday in the mountains. In fact, it's the story of a landmark event in the history of Japanese student activism. Caught up in the worldwide frenzy of the late sixties, Japanese students started up a bewildering array of left-wing splinter groups, a couple of them eventually merging into the United Red Army of the title. To help prepare for the upcoming revolution, leaders Mori (Go Jibiki) and Nagata (Akie Namiki) take their troops out to a mountain base to train and prepare. Over the course of three months, the URA will completely self-destruct in an orgy of bickering, self-critiquing and violence, culminating in a famous last stand at the Asama mountain lodge.

United Red Army is made by veteran Japanese director Koji Wakamatsu - amusingly, it turns out that one of his earliest movies, Secrets Behind The Wall, will be in that JAPANESE PORN season at BFI Southbank in December. Wakamatsu claims in his programme note that he believed deeply in the aims of the original URA, and doesn't want his film to be considered a judgement on them. Which is curious, because for me it works brilliantly as an ultra-black farce, showing how a reliance on blind dogma ultimately tears the whole group apart. The lengthy and claustrophobic middle section of the movie, depicting the troops going nuts in their mountain base, plays like the Judean Popular Front/People's Front Of Judea scenes in Monty Python's Life Of Brian, except that people are dying as a result of their petty rivalry. And the self-delusion of people trying to justify their basest actions in a political framework comes through hilariously: notably the leader who cops off with another member's wife, and gives a self-critique of his adultery which goes "I regret not having married the sort of wife I could bring to the mountains."

There are some interesting parallels with yesterday's Il Divo. Both films assume a certain level of existing knowledge of their country's recent history, and open up with huge information dumps for those of us who don't have that. They share a heavy use of captions to identify all the key players when they first appear, although URA also captions them on their exit (once the students start dying, it makes the film feel uncomfortably like Battle Royale). And the two films also share a flair for darkly comic detail that shows the ludicrous human emotions under the surface idealism. At one point in the climactic siege, it almost looks like an argument over biscuits will be the thing that finally destroys the URA, leading to the magnificent line "there's no such thing as an anti-revolutionary cookie". Which leads me to doubt if Wakamatsu is really being as impartial as he claims to be. Whatever, the result is an electrifying piece of work, and I'm reasonably sure we're meant to be laughing at it...