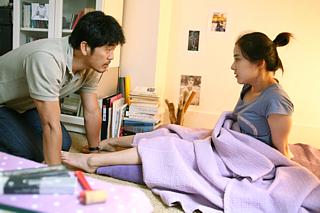 I gave it a name last year: The Seafood Fallacy. You see Film B listed in the LFF programme, and say "oh, that's from the guy who did Film A, I'll go and see that." Film B turns out to be terrible. You go back and look up what you said about Film A, and it turns out that you didn't like that one either. Don't look at me like that: when you see thirty or forty festival films a year, it can easily happen.

So when I read that Korean director Hong Sang-Soo had a new film in this year's Festival, I made damn sure I did my research first. It turns out that I liked his 2004 film Woman Is The Future Of Man, but was less impressed by the following year's Tale Of Cinema. One-all: that's a good enough strike rate to make him worth another go.

I've never really paid attention to the drugs laws in South Korea, but they must be pretty terrifying, judging from the reaction of Sung-Nam (Kim Yeong-Ho) to the news that the police might know about him smoking a joint: he abandons his wife and hides out in Paris. He stays at a guest house full of Koreans, and all his socialising is done with ex-pats. In particular, he spends a lot of time hanging round a flat shared by two girls, trying to work out which one he likes the best. Meanwhile, one of his exes keeps popping up at inconvenient times, and there's still the small matter of his wife back home.

Hong Sang-Soo's earlier films - at least, the ones I've seen - have all distinguished themselves by doing tricksy things with story structure. Night And Day's structure thus becomes unusual because it's so relentlessly conventional: a series of date-stamped day-by-day sequences, mainly shot in a single take with whip pans and zooms all over the place. Narratively, the only place where Hong deviates from the norm is in an extended coda, which takes the story a bit beyond its natural end point.

It's a long film - over two hours and twenty minutes - but hardly ever drags, because the day-to-day stucture allows for a lot of contrasting incidents. Everything that happens to Sung-Nam is given equal dramatic weight, whether it's a confrontation with one of the many women he's got on the boil, or a low-key feud with what appears to be the only North Korean in Paris. The story and characters have a lot of charm, and make the film a genuinely intriguing cross-cultural hybrid: a French-style romantic comedy with a Korean sensibility. I would, however, take issue with just one plot point in the story - if a man is in a foreign country's pharmacy where he doesn't speak the language, and he's been told by a woman that he can have sex with her as soon as he buys some condoms, I believe he'll find a way to buy those condoms. 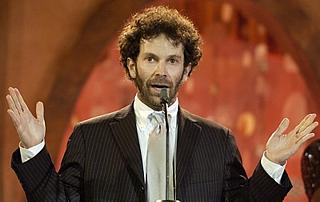 My second evening consecutive evening with Charlie Kaufman, after last night's disappointing screening of Synecdoche New York. Still, that shouldn't be a problem: after all, this is a talk about Kaufman's career as a whole (which I've liked a lot), not just his latest film (which I didn't). There's an initial moment of panic when it's revealed that our interviewer for the evening will be professional fucktard Toby Young: but in fact, Young manages to keep the evening moving quite nicely, after the mishap of discovering that his first question is factually wrong. ("Why did you send Meryl Streep to accept your Oscar?" "Um, it was the BAFTA...")

Young admits upfront that the discussion will be a chronological one, based around the four movies they've managed to obtain clips for. After a few years writing for TV ("it wasn't really training for screenwriting, just a job"), Kaufman hit the big time with his first produced screenplay, Being John Malkovich. It's at this point in the interview that Young tries to get Kaufman to say which rules of screenwriting he's prepared to break, and which ones he tries to stay within. Kaufman doesn't believe it's a question of 'rules' at all, complaining that it's a typical example of journalists trying to impose their own pre-written story on him. "I feel bad enough doing that to characters I've made up, never mind real people..." But he's prepared to accept that he doesn't feel bound by the Hollywood conventions - "nobody ever says there's only one way to paint a painting, but they still believe there's only one way to write a screenplay."

The talk moves on through the other films in Kaufman's back catalogue: Adaptation (where he felt bad about putting made-up dialogue in the mouths of real people, so he wrote himself into the story as a gigantic 'I Am Lying' signpost), Eternal Sunshine Of The Spotless Mind (he praises Jim Carrey as an actor with just the right spirit for the script), and Confessions Of A Dangerous Mind (where he was a bit underwhelmed about the idea of just being a writer for hire, but admits it's more typical of the Hollywood screenwriter experience). After developing close relationships with directors like Michel Gondry and Spike Jonze, he talks about the additional level of control he's now getting from directing his own material - which, I think, is part of why Synecdoche New York ultimately fails. It's interesting to note that when he's asked two separate questions in the Q&A about moving into Pixar movies or long-form television, his main objection to both formats is that he'd have to delegate work to other people, and he seems very reluctant to do that.

The Q&A is generally rather enlightening as these things go, apart from a ten-minute stretch near the end when a Russian twat bores everyone to death with an utterly incomprehensible question on technology and perception that he reads out verbatim twice. Kaufman's perfectly happy to take on all subjects, though: from Robert McKee's screenwriting manuals ("we've all seen so many movies by now, we don't need books to tell us how they work") through the differences between theatre and film ("plays are different each time they're performed, so I try to make films so dense that they seem different each time you see them") to accusations of self-indulgence ("if you're just masturbating and asking people to applaud you, that's no good: if you're genuinely offering something of yourself, that's an incredibly generous act"). He finishes off by insisting that nothing in his films is there to deliberately confuse the audience, and almost makes me want to give Synecdoche another go. Almost.