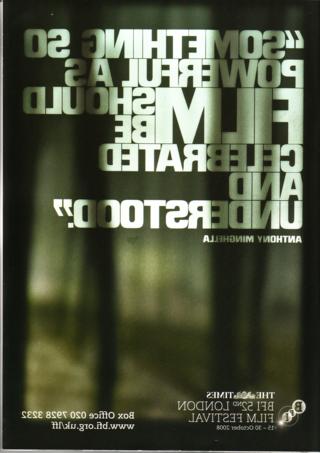 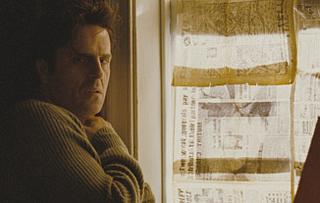 One trend that seemed to permeate throughout the whole of the festival, and was a universal theme among all of the ............. whoops, screech, brake, crunch, stop.

Okay let me start that again, because you see the thing is having only seen five films, which is around half of my normal small sample, I can't really make any comments on the Festival as a whole. All I can say is of those five, three I enjoyed and would happily see again: Telstar, The Wrestler and Country Wedding. One was interesting enough for a one time only viewing: New Town Killers. And one was so poor, that it beggars belief that people would invest money into the making of it: The Brothers Bloom.

I never made it to the NFT (or the BFI on sea, or whatever it calls itself now) so can't comment on whether like the Odeon West End they now have staff marching along the aisles trying to sell you ice cream and bottled beer. I would of course hope not, as the next thing you know there would be some clown trying to bring hot chocolate into a screening. However I must comment on the pointlessly loud decibel levels at the Odeon West End, which serve no purpose surely.

Other than that, thanks to Spank and The BBG for getting me the tickets, and (holidays permitting) I hope to do more films next year. 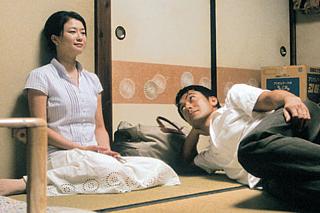 Close behind (in viewing order): Winstanley, Religulous, (2/3 of) Tokyo!, I Am Alive, The Warlords, The Witch of the West is Dead

Yes, I know there are 6 films in my Top 5. When I started putting the list together, the Top 3 fell into place very easily, but I just couldn't decide between the next 3. So think of them as a joint 4th place.

This was a pretty good festival for me, with the natural order of things being restored with an Asian film (in fact, a Japanese one) back at the top of my list. The postmanteau film Tokyo! manages to appear in both the good and bad lists, as the middle third was really not to my taste and quite boring with it, but both the Gondry and the Bong sections were delightful: a film made up of just those two would probably have made it into my Top 5.

The other thing notable yet again is the number of films which appealed but which I just couldn't fit in. Some will be getting releases fairly soon (or are even on release already), so things like W. and Let's Talk About the Rain I'm not too concerned about missing. But other films show no sign yet of having a release date. So I'm expecting that The Brothers Bloom, The Good, the Bad, the Weird, Sugar and Tulpan would get a release, since they were in the Film on the Square section, but none have a sign of one yet (outside of other festivals). But others which I would really like to see if they do get a release in future include The Candidate, Flame & Citron, The Betrayal and The Desert Within. It was also a shame not to fit in A Modern Musketeer, in the archives section, and I doubt there would be much chance of a cinema release for that (although maybe a DVD).

Still, best not to dwell on things I didn't see, as there was plenty which I did (35 features, one shorts programme and a couple of talks) and most were pretty good. Country Wedding was probably the best example of the small foreign gem I like picking up on at the festival, and as I mentioned in the write-up for I Am Alive, in the Gentilis I think I've come upon a new film-making team to look out for in future. And although Achilles and the Tortoise still had enough flaws to keep it out of the lists of best films above, it's nice to see Kitano back making a film which was for the most part enjoyable. 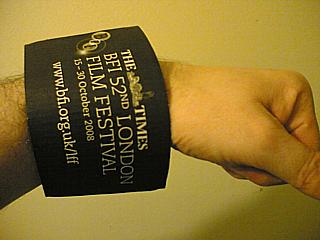 Not that I want to kick a gift horse in the bollocks or anything, but... the LFF was a bit light on freebies this year, wasn't it? Back in the day, the gala screenings would come with goody bags featuring ice cream, magazines, t-shirts, all sorts of stuff. This year, every gala - even the Closing Gala, which we paid twenty-five bleedin' quid for - resulted in a haul of no more than a bottle of water and a small bar of Green and Black's chocolate. Meanwhile, those tightwads at The Times (cue their one mention here for 2008) didn't bother doing their usual giveaway DVD of trailers and interviews.

And with the BFI refusing to produce an official t-shirt this year - "lack of demand," The BBG was told when she asked - you couldn't even buy promotional clothing from them. Apart from, of course, their miserable attempt at jumping on that inspirational wristband bandwagon that was so big with the kids a couple of years ago. The LFF 2008 wristband (pictured) was at least free with every takeaway cup of coffee purchased at BFI Southbank: but it's ludicrously oversized, and the corrugated cardboard construction doesn't give me confidence in its durability.

So we have to make do with the films: and although there were very few surprises in this year's programme, there was enough fine stuff to make it a worthwhile year. Five films stand head and shoulders above the rest, with Still Walking standing even higher than the rest, possibly on some sort of sturdy wooden crate. Kore-eda's touch with a human story was evident in the heartbreaking Nobody Knows, and his love of a subtly turned gag could be seen in Hana: but this film combines the two into a lovingly observed comedy of family manners, with just the right amount of bite where you least expect it. The rest of my top five, in no particular order, includes two darkly comic lessons in modern history (Il Divo and United Red Army), one slice of Icelandic comedy that counts as my main surprise of the year (Country Wedding), and Slumdog Millionaire (another machine-tooled piece of solid entertainment from Danny Boyle, only slightly let down by the discovery that M.I.A.'s Paper Planes has become as ubiquitous on noughties film soundtracks as Yello's Oh Yeah was in the eighties).

Because I'm nice like that, I'd also like to mention five films that weren't quite up there in the top five, but which all have elements of note. Hunger, which introduced Steve McQueen as a filmmaker of, at the very least, ferocious ambition: Johnny Mad Dog, which wobbled alarmingly on the borderline of exploitation before redeeming itself with its breathtaking final scene and its naggingly catchy end titles song ("it is my will/that when I die..."): The Wrestler, for Mickey Rourke's fearless performance: Telstar, which had more than enough enthusiasm in its making to get over its shortcomings: and Waltz With Bashir, which I loved to bits at the time but seems to be curiously fading from my memory the further I get away from it.

There's no point in repeating myself on the bad ones, so here they are: Hansel And Gretel, The Secret, Synecdoche New York (stop trying to persuade me otherwise, Kaufman!), Under The Tree, and Leos Carax's wonky middle section in Tokyo! Pass by, move on.

So, with all that out of the way, the usual thanks. To Sandra Hebron, her boots and her Festival team: to all the lovely people working at the cinemas, especially the Odeon's manager Chris Hilton, who's just about to retire: to The Belated Birthday Girl, Suzanne Vega Fanclub and The Cineaste for their review contributions: to Jon, Susan, Lesley, Seapea, Caroline and the rest for coming along to the films (even though one of you didn't): to da FU posse, especially FilmFan, Mr and Mrs Malcotraz, and Max Fischer's swinging sack: and to you lot, whoever you are, for reading all this.

And to show how grateful I am, here's a freebie from me to compensate for the lack of official ones from the Festival. Click on the inverted picture at the top of this page, and you'll have a large LFF 2008 image that can be printed onto iron-on transfer paper to create your very own Festival t-shirt, seeing as they couldn't be arsed doing an official one this year. If Greg Dyke's reading this, feel free to run off a few copies for the BFI Southbank shop, but just make sure that I get a few bananas passed my way. Being a monkey, and all.

Sounds as though you had great fun. Slowly reading the reviews. Hope to be along next year after a bit of a break.