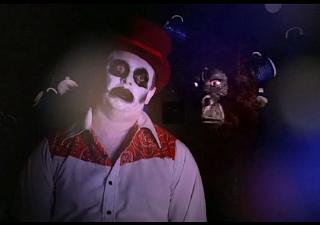 Because I can now reveal (for those of you too brain-damaged to pick up on last month's hints) that The Belated Birthday Girl and I spent Christmas week in Prague this year. Last year. Whatever. Anyway, we've come back with a couple of Monkey Business CDs and a whole pile of recommendations for you, and you can expect the latter to appear in a travel piece here some time this month.

Also on the schedule in a packed January, we should hopefully have our fashionably late end-of-year roundups for both film and music, and the introduction of a brand new feature that will take up most of 2009. It answers the burning question: now that I've run out of stuff from the old site to repost, what else can I use to pad things out here? And the answer is, reposts of stuff that I haven't actually written yet. Spank Gold starts later this month: it'll be interesting, I think.

In the meantime, your Simian Substitute Site for January 2009 is Monkey Cup, the video of the lead track from the new download-only Pork EP by 7 Seconds Of Love. Which makes 7SOL frontman Joel Veitch a record breaker, as he's now been responsible for four Simian Substitute Sites in the ten-and-a-half year history of the award. (See if you can spot the other three, not including his most recent appearance here on Christmas Day.) This puts Joel ahead of Misha Lunchbox, whose Citizen Lunchbox media empire has been featured three times but seems to have gone into a bit of a hibernation these days.

As for Monkey Cup, it shows 7 Seconds Of Love continuing to move away from the animated videos that originally made their name. Funny how a lot of their videos these days seem to just feature Joel, isn't it? Anyway, it's a tragic tale of a man, a cup and a monkey, although The Belated Birthday Girl insists that the monkey was framed. See what you think.

Comments for the New Year, anyone? Don't be shy.

Monkey cup sounds interesting want to know more about it .

I thought about starting my own blog too but I’m just too lazy so, I guess I‘ll just have to keep checking yours out.