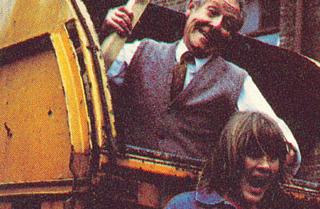 It was a rite of passage back when I was a lad: with the advent of video, I imagine kids don't even think about it these days. I'm talking, of course, about sneaking into an X film at the pictures before you're 18. It was easy for girls, who could just slap on the makeup to make them look older. Us boys had two options: try to shape your facial bumfluff into something approaching a beard, or take a girl along with you for cover. I played safe and did both, ensuring my entry to the movie I'd chosen for this milestone - John Landis' Kentucky Fried Movie.

If you read the recent Spank Gold piece on the 1990 Edinburgh Festival, then you'll know how that turned out. My first X film ended up being the supporting feature that preceded KFM: a terrible Confessions rip-off entitled Adventures Of A Private Eye, directed by notorious British hack Stanley Long. I never quite forgave him for that.

Until a couple of weeks ago, when I attended an event in his honour at BFI Southbank, which increased my respect for Stanley Long no end. After all, how many directors do you know who could bring along a celebrity entourage that included both Anita Harris and David Van Day?

Stanley Long is primarily known as a maker of sex comedies, such as the Adventures films (...Taxi Driver and ...Plumber's Mate are also available). But in the early 80s, he branched out briefly into the field of horror, and made a bloody good job of it. Collaborating with writer Michael Armstrong, he made three shorts sometimes referred to as the Screamtime trilogy (the title of a direct-to-video portmanteau film he subsequently made by sticking a framing story around the shorts). I saw two of them when they were originally on cinema release, and remember enjoying them quite a bit.

At BFI Southbank, Vic Pratt and William Fowler run a regular slot called The Flipside, giving rare and culty movies a screening they wouldn't normally get. So three cheers to them for getting hold of reasonable prints of all three shorts and showing them back to back at the BFI in February 2009. Stanley Long was obviously tickled by the attention, and packed at least one side of the auditorium with his famous mates, all of whom got introduced in his pre-screening talk.

My presence at the event was mainly the fault of Smudge The Cat: coincidentally, the girl who helped me sneak into that Kentucky Fried Movie screening. In 1981, she paid good money to see the naff 80s vigilante movie The Exterminator twice, and second time round she dragged me along with her. Not because she particularly liked The Exterminator - she didn't - but she wanted to see the supporting short again. It was Dreamhouse, the first of Long's horror shorts (shot under the pseudonym Al Beresford, precisely so smartarses like me and Smudge wouldn't say 'oh shit, it's that guy who made the Adventures films'). Long's distribution company, Alpha Films, had bought the rights to The Exterminator, and Long needed a support film to go with it, so he made one over the space of a week in a friend's house.

Smudge was right - it's a cracking little short, and still holds up today. But at the Q&A at the BFI screening, Michael Armstrong put his finger on the real reason why it works. Back when horror movies had British short films attached to them, there were only two possibilities: if they weren't travelogues, they'd be soft porn, the only adult genre of shorts we seemed capable of making at the time. I remember seeing David Cronenberg's Scanners when it first came out, only to find that a tatty British sexcom called Can I Come Too? was supporting it. For the first five minutes or so, Dreamhouse feels like it's going the same way: when newlywed couple Tony and Susan move into their new home, you can't help but groan when their attempt at a quickie is interrupted by an unannounced visit from the vicar.

And then, something slightly unusual happens. And then, a few minutes later, it happens again. And a few minutes after that, the blood starts. What follows is a beautifully paced set of mounting reveals, by which time the audience doesn't really know what it's watching any more. Long piles on the tension bit by bit, and - best of all - comes up with a visually elegant resolution of all the plot strands in the final minute. (I said elegant, not pretty.)

The surprising amount of gore in Dreamhouse made it a fitting support to the OTT violence of The Exterminator. Similarly, Long's next short - That's The Way To Do It - dovetailed quite nicely with its chosen main feature, Creepshow. George Romero and Stephen King's homage to the horror comics of the fifties went for lurid comic scares rather than bloody gross-outs, and you get the feeling that that's more Long's territory. In his recent autobiography, X-Rated, he notes that he didn't enjoy shooting the gory climax of Dreamhouse, but had to do it out of commercial necessity.

Commercial necessity also lies behind the unusual length of the shorts. Under the old Eady Levy rules, a distributor like Long could claim 50% of the box office for a British supporting feature, providing it was over 33 minutes long: all three of these films overrun that by, ooh, anything between one and three minutes. All well and good for Dreamhouse, where the slowness of the opening reel plays off against the later mayhem: less so for TTWTDI, which feels overextended at this length. Its story of a malevolvent Mr Punch and his beleagured owner only really has one big idea to it, and once that's revealed there's not much else the film can do other than provide a few nicely-timed jumps. The final sequence has a certain gruesome charm to it, but it's undercut by some sloppy editing: my memory of it from a quarter of a century ago plays much better than actually seeing it on screen today.

I saw both Dreamhouse and TTWTDI on their original cinema outings as supporting features in the early 80s, but the final film in the trilogy - Do You Believe In Fairies? - has eluded me until now. It's easily the fluffiest of the three, more of a comic fantasy than actual horror, built around a starring performance by the aforementioned David Van Day of Dollar and jungle fame. Apparently, Van Day's attendance at the screening was a last-minute surprise: this must have been awkward for Long, whose programme note for the film complains about his 'diabolical acting'. (He's right, though.)

As well as being the lightest of the three films, it's also the most predictable. Once you hit the first major plot point in the story - batty old rich woman Dora Bryan telling dodgy handyman Van Day that her property is being protected by the fairies at the bottom of her garden - you can guess pretty much where it's heading, based on the narrative structure of the previous two shorts. But by now, you can also spot the things that Long's very good at. The slow, controlled buildup in all three films is impressive - part of it's almost certainly down to the requirement to pad them out to at least half an hour, but for the most part it works well. Also, Long has a great eye for tiny creepy details to set the viewer on edge - the slow movement of Mr Punch's head when he's left unattended, or the tacky starburst filters used to shoot Dora Bryan's fortune which have a subtle visual echo with what's to come later. Once again, there's a wicked payoff in the final seconds, and this time it works just fine.

These aren't necessarily great films, even by exploitation standards (though a convincing case could be made for Dreamhouse). But the Screamtime trilogy is a reminder of a fun time in British cinema history when we didn't necessarily have an industry, but we did have mavericks like Stanley Long who could combine a palpable love of movie-making with a sure sense of how to make a fast buck. And even in retirement, his instincts for the latter are still razor-sharp. When the Q&A session had to be terminated early due to overrunning, he cheerfully suggested "most of your questions are probably answered in my book..."