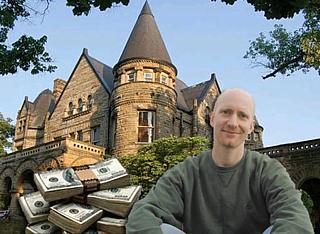 "I love deadlines," Douglas Adams used to say. "I like the whooshing sound they make as they fly by." So let's try imposing one. By now, most of you have probably forgotten that I went to Prague for Christmas in 2008, and have certainly given up on ever seeing anything written about it here. Christmas 2008 has long receded into the mists of time, and Easter 2009 is nearly upon us. So: I'll aim to get my article on Prague posted here in time for Easter Sunday. There, let's see how that one works out. Have a video while you're waiting.

On the other hand, the Spank Gold project appears to be running more or less to schedule (and may well be responsible for the delays elsewhere on the site, but let's not think about that for now). So this month, you can expect hazy flashbacks to the Edinburgh Festival and London Film Festival of 1992. Plus, stuff I haven't really thought about yet. Maybe.

In the meantime, your Simian Substitute Site for April 2009 is Ask The Flying Monkey! The monkey in question is Brent Hartinger, a writer for the website After Elton, your number one source for "news, reviews and commentary on gay and bisexual men in entertainment and the media." Brent's weekly column answers your questions on gay showbiz - and judging from the archive on this page, people do seem to have a lot of them. At the time of writing, the most recent column is particularly informative. (Not to mention the movie scoop that Hartinger reveals elsewhere on the site.)

Can't hang around, I'm doing some initial preparation for the next major travel piece to be published four months late on this site. Any comments while I get on with that?