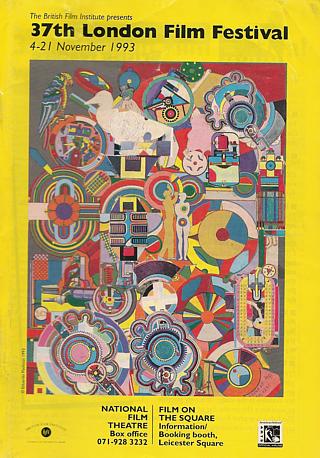 Before taking a look at the programme for the 1993 London Film Festival, let's take a look at the programme - as in, the printed booklet where they initially announced what films were going to be shown. In 1993, as in all the previous years I'd attended, it was a chunky A5 beast, an expanded version of the usual National Film Theatre monthly programme. This would be the last year it would appear in that format - between 1994 and 1996 they experimented with a clumsily oversized 12" square affair, before settling on the A4 magazine we still have to this day. 1993 was also the last year when a big name artist (in this case Eduardo Paolozzi) provided the programme cover image - subsequent years would be more geared towards anonymous-looking graphic design, which was a bit of a loss as far as I'm concerned.

Anyway, the main reason why I'm going on about the programme booklet is because my copy of the 1993 edition has a pull-out insert with all the pricing information. I must have lost the equivalent insert for 1992, otherwise I would have realised that was the year when the matinee voucher scheme was brought in for the first time. (The 1993 programme describes it as 'back by popular demand after last year's success'.) For those of you graphing the prices as they increase over the years: in 1993 you'd pay £5.95 for an NFT screening, £6.95 for one at the Odeon West End, £8.00 for the Opening and Closing Galas, and £40 for a set of ten matinee vouchers.

Nevertheless, even with that sort of deal, I still wasn't taking time off work to catch cheap matinees. It still surprises me just how restrained I was at these early Festivals - generally one film a weeknight, occasionally two, with a small splurge in the middle weekend. Here's what I remember about them. 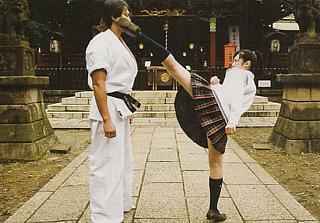 SPANK GOLD: Year Of The Monkey 1993: Waiting For The Great Leap Forwards 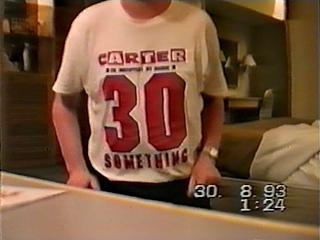 If you hang around the travel section here at all, you'll doubtless be familiar with the lengthy delays between me visiting a country and finally getting around to writing about it. Well, I suspect the 16 year delay between this particular trip and the writeup is likely to remain unsurpassed for the lifetime of this site.

My excursion to China in 1993 - primarily undertaken so that I could be on the opposite side of the planet from all my mates on the day I turned 30 - was the first time I'd ever travelled outside of Europe, and was the beginning of a love affair with Asia that's lasted to this day. Later this year, I'll be going back to the Mainland (with The Belated Birthday Girl in tow, of course) for the first time since that holiday. So a look back at 1993 seemed like useful preparation for that. I exhaustively documented the trip in a ONE HUNDRED MINUTE LONG HOLIDAY VIDEO which took its title from a Billy Bragg song: don't worry, I've rewatched it so that you don't have to. (Though about thirty minutes of the best bits are available on a YouTube playlist if you're curious.) 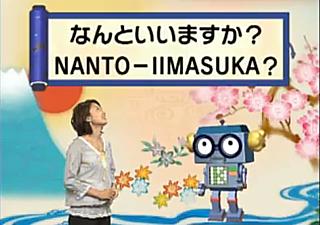 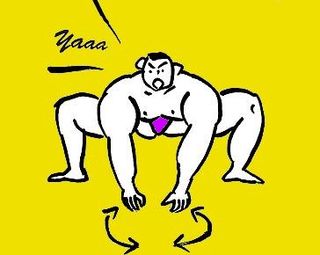 I saw my first sumo tournament in 2004: you might remember I wrote about it here. I never really bought into the first big wave of UK sumo fandom, when Channel 4 started showing it regularly in the late 80s. It wasn't until I saw it, as it were, in the flesh that I could see what all the fuss was about.

I'd been hoping that I'd get the chance to do that again this year: a series of exhibition bouts had been arranged for this autumn at the Royal Albert Hall, and I was gearing up to drag some of Spank's Pals along to it. Sadly, that's not happening any more, another victim of the credit crunch and a yen that's stronger than Asashoryu right now.

Still, all is not lost. For some time now I've managed to keep up with the regular sumo tournaments over in Japan: and with a little knowledge and a reasonably high-speed web link, you can too. 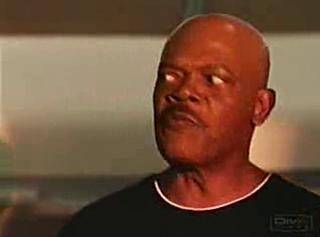 I know, I know: after all the ballyhoo about getting the Prague Christmas writeup on the site in time for Easter Sunday, things went a little quiet around here. Blame it on a combination of a busy period at work, plus most of the computers in my house deciding to go wrong in different ways at the same time. That's why you got all of Spank Gold '92 in a big pileup over the last two days of April.

Hopefully, things should be slightly better organised for May. Spank Gold hits 1993, a year when I didn't go to Edinburgh. What I did instead should start giving you some clues about plans for later this year. You should also get a movie review, and hopefully one or two other bits and pieces. And I'll try to space them a little more evenly throughout the month, if I can.