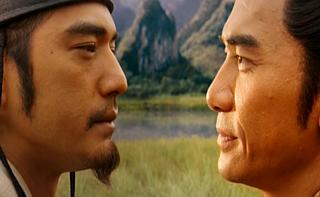 I'm happy to go with the critical consensus on this one. After a decade or so during which it's become increasingly difficult to be a John Woo fanboy (disclaimer: I could never quite bring myself to watch Paycheck), the director has returned to his homeland and produced his first great film for ages. Red Cliff is a sweeping Chinese historical epic that provides all the pleasures you used to expect from a Woo film over its two-and-a-half-hour running time. And it's in UK cinemas now (information correct at time of writing).

Well, maybe I won't go completely with the critical consensus. Because as every UK review of the film has noted, it used to be five hours long. In Asian territories, Red Cliff was spread over two separate films released a couple of months apart, like Che was here earlier this year. For various reasons, it was decided that outside of Asia, roughly fifty per cent of the movie had to be removed to make it into a single film for Western audiences.

“What must that five hour version be like?” all the critics have been asking. Well, we do live in an age when it's not that bloody difficult to find out. Red Cliff was released in China ages ago, the second part hitting cinemas during the traditional sweet spot of Chinese New Year. A pair of excellent Hong Kong DVD editions have been out there for almost as long, and they're region free so they can be played anywhere in the world. And yet, there seem to be very few people willing to make the moderate investment of time and money required to compare the Eastern and Western versions of the movie. Well, let's see what we can do about that.

The story of Red Cliff is one of the Chinese classics, and has been retold in countless forms over the years: in fact, there was another Hong Kong movie not too long ago on the same subject called Three Kingdoms: Resurrection Of The Dragon, starring Andy Lau. It's 208 AD, and dodgy Prime Minister Cao Cao (Zhang Fengyi) is rampaging through the south of China destroying all the warlords in his path. Only two kingdoms are prepared to stand up to him - Xu, ruled by Liu Bei (You Yong), and East Wu, ruled by Sun Quan (Chang Chen). After a messy defeat in Xu, it becomes apparent that the two will have to form an alliance to stand any chance of overcoming Cao Cao. You might imagine from this synopsis that Liu Bei and Sun Quan are therefore your leading characters. Interestingly, you would be wrong.

What do people expect from a John Woo movie? Well, if you're one of the Hollywood producers who worked with him over the last decade or so, the answer would appear to be "explosions 'n' gunfire 'n' shit." Or you might dig a little deeper and see the main thing that Woo's protagonists have in common, particularly in his classic Hong Kong work: they're strategists. When an audience watching Hard Boiled cheers on Chow Yun-Fat as he shoots bad guys while sliding down a banister, part of what they're cheering is that he was smart enough to think of it. Woo's heroes - and for that matter, his villains - aren't mere violent thugs, they're always men with a plan.

So it should come as no surprise that the central figures in Red Cliff aren't the kings, but the guys behind them who plot the attacks. In Xu that guy is Kongming (Takeshi Kaneshiro), a pure theoretician of warfare: while his equivalent in East Wu is viceroy Zhou Yu (Tony Leung), who prefers a more hands-on approach. Leung does his usual fine work in the showier role of the pair, but is slightly hamstrung by a slipshot Mandarin redub of his dialogue - surprisingly, given their respective reputations, it's Kaneshiro's steady calm that impresses more. The two of them have a relationship that's as complex and satisfying as any male partnership in John Woo's oeuvre, starting with quiet curiosity over each other's methods, developing into full-blown respect by the end. Well, at least that's the case in the Asian version: when two and a half hours of a five hour film have to be cut, inevitably such subtleties are the first things to go.

There's a sequence in the middle of the Western cut that illustrates this beautifully, when it's discovered that the combined armies of Xu and East Wu don't have anything like enough ammunition for the battle that's to come. Kongming has a plan, and we watch with delight as he executes it flawlessly. Three changes have been made to this in the shortened version: small ones, but they all have an impact. Firstly, the subtitles have been rewritten to more or less reveal Kongming's plan upfront, rather than allow the viewer to discover it through the visuals - part of an overall strategy to simplify the story for an audience that isn't already familiar with it. Secondly, what looks like a throwaway detail at the end of the scene - a boat drifting away out of Kongming's control - turns out in the full version to have a devastating impact on a couple of minor characters who barely figure in the Western cut. And finally, we lose two typically Wooesque pieces of character development either side of the scene, in which the two strategist friends literally threaten each other with death if their respective ends of the plan don't work.

None of these edits has a major impact on the story, but some texture is lost as a result. And the same applies throughout the movie, with most of the cuts coming in the setup scenes from the first half to leave room for the payoffs in the second. Everything is done to streamline the material down to almost pure plot, which just emphasises how good a lot of the stuff around the plot actually is. It amuses me, for example, that the spunky princess played by Vicki Zhao still gets to do pretty much all her fighting and spying, but her romantic subplot has been completely destroyed. Still, you never feel like anything's missing from the international version: in fact, it allows Woo to go almost avant-garde with some of the editing, using cross-cutting and wild jump-cuts to help compress the material in a way that's genuinely thrilling to watch.

But in the end, it's a war film, and all these scenes of careful planning and plotting pay off handsomely. Woo's handling of action scenes is back on form again, using an arsenal of unexpected techniques - freeze-frames, sudden zooms, outrageous camera movements - to throw you into the chaos of war, without going for the usual modern approach of simply hurling a bunch of rapidly-edited shots at you. I have some issues with the mid-point land battle, simply because of its gargantuan scale: sure, the point is to show Kongming's astonishing grand plan, but it seems that since Lord Of The Rings we can't have a battle scene with fewer than half a million people in it any more, and the CGI used is becoming tediously familiar. The final confrontation is much more intimate by comparison (being at the level of a mere naval holocaust), and has all the more impact for it.

So which is best: the long two-part Asian version, or the truncated Western cut? Having seen both, I could go either way. I like the extra details in the full-length version, but at this stage it looks like the only way you can see it in the UK is via the double-DVD sets of Red Cliff and Red Cliff 2 (easily obtained from YesAsia and other fine retailers of Hong Kong cinema). If you want big screen spectacle in a cinema, the shorter version of Red Cliff has been at a multiplex near you since June 12th, and you certainly won't be disappointed by it. Although if someone wants to bring over the Asian version for a one-off festival screening or something like that, you can book me up for that right now.

To be fair, your aunt was pretty close.

I just read this article. Quite good information ! It is making me laungh. I really love it. :-)