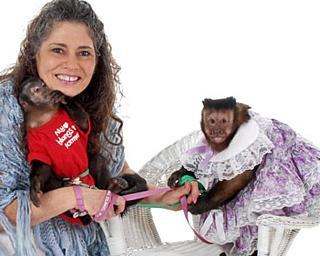 You probably think, after five months worth of Spank Gold posts, that you know how it works by now. Well, you're wrong.

I realise that it'll make the internal timeline of this blog as convoluted as the last season of Lost, but I'm sure you'll cope. And it gets worse: even though you won't be getting full day-by-day coverage of the 2009 Edinburgh Festival, this month I'll try to put together a quick preview to help people (specifically, those of Spank's Pals who are going up there without me) decide what's worth seeing. Which will probably be the equivalent of that bit at the end of season three where Jack's standing outside an airport yelling "WE HAVE TO GO BACK!" Or something.

In the meantime, your Simian Substitute Site for June 2009 - suggested by The Belated Birthday Girl, so thanks to her - is My Monkey Baby, the microsite for a documentary on Channel 4 TV this month. Currently it's scheduled to air at 10pm on Tuesday June 2nd, 11.05pm on Wednesday June 10th, and then probably twice a day on More4 until the end of time like any other Channel 4 documentary. (Presumably it'll also be watchable online throughout June on 4oD Catch-Up, Channel 4's more shit version of the iPlayer.)

And yes, My Monkey Baby is exactly what you fear it might be. From the programme summary on the site: "There are around 15,000 monkeys living in people's homes in America. For some owners, the human-like qualities of monkeys make them the preferred option to kids." At the time of writing (the day before the first screening), there are just two comments casting doubt on the mental stability of those owners: there may be more once the programme's aired. Let's wait and see how that works out. Have a quick poll while you're waiting.

What if I don't want to? But I'm using email, is that a problem? It doesn't matter! Comments!

Now available to watch in full on YouTube, courtesy of 4oD.

The Anglo-Saxons called April Oster-monath or Eostur-monath. The Venerable Bede says that this month is the root of the word Easter. He further speculates that the month was named after a goddess Eostre whose feast was in that month.