Simian Substitute Site for July 2009: Where Are They Now? - Bubbles 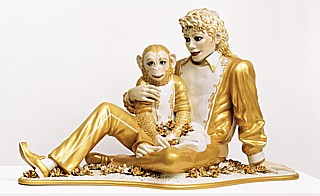 I know the first-of-the-month post is usually where I hype up what my plans are for the month to come. But it's going to be a little tricky to do that for July 2009. For now, let's put it like this: there will either be a spectacular series of posts throughout the month, or there'll be a creepy and awkward silence for a fortnight or so. It could go either way, wait and see. Hopefully, interspersed with that we'll have the Spank Gold action you've come to know and tolerate, including a wee USA special for Independence Day.

Beyond that, I really don't know how this month will pan out. I mean, on Bastille Day it'll be this site's eleventh birthday, and I couldn't tell you if we're going to be commemorating it on the day or not. I mean, just how Great a Firewall is it anyway? We'll see.

In the meantime, your Simian Substitute Site for July 2009 allows me to commemorate the events of June 25th 2009, which will go down in history as THE THURSDAY OF DEATH. I spent the day trapped in front of a computer, on an eight-hour web conference call running on Eastern Standard Time. Every so often I'd nip out of the call to see what else was happening in the world, and another famous person would be dead: Steven Wells, Farrah Fawcett, Sky Saxon, Michael Jackson, Jeff Goldblum (in selected territories only).

As noted at the time, Steven Wells was the one that hit me the hardest: he was the only one I'd ever had any contact with. Although he's best known and loved for the comic heights he'd reach ranting about the stuff he hated, there have been interesting tributes from writers - Warren Ellis and Stewart Home to name but two - talking about getting enthusiastic praise from Swells in the early days of their careers. Is it reaching too much to suggest that his letter to me on March 23rd 2000 was along the same lines? After all, he didn't need to thank me for the ATTACK! Books review, but he did anyway: and his opinion meant enough for me to run it on the front page for a couple of years.

He dropped me a couple more emails after that, and we even chatted on the phone once - he wanted someone to design a website for him, and I foolishly passed him on to some people who knew what they were doing rather than taking the job myself. So even though I couldn't really say I knew the guy, my small personal experience of him was as a genuine enthusiast who'd get 100% behind anything that took his fancy (and 0% behind anything that didn't). As has been noted in virtually every tribute over the past week, even if you didn't agree with what he said, he always said it in a compulsively readable way - "proper fucking writer," to quote Mr Ellis.

In a spooky coincidence, Swells' final published words could be seen as an omen of how the reports of his demise would end up being overshadowed. Because it's the death of eighties pop star Michael Jackson that's dominated the headlines, with the inevitable analysis of his murky personal life and the concerns about the future of his children. But bugger the children*, what about the monkey? Bubbles the chimp was Jacko's constant companion for years, becoming a pop culture icon in his own right and even inspiring the tacky Jeff Koons sculpture pictured above. But his role has been Stalinistically airbrushed out of the Jackson legend in recent years. It's been down to Comedy Central UK, of all places, to do the necessary detective work, and this month's Simian Substitute Site is their Where Are They Now? piece on Bubbles. (The Popbitch Jackson Tribute also has a Bubbles story, although their version predictably has a lot more (literal) muck-raking.)

You might think that's a bit thin for a Simian Substitute Site, and just an excuse to run a couple of paragraphs of obituary for Steven Wells. I couldn't possibly comment. You can, though: see the box below.