Home Archives/Categories About Me RSS Feed Mailing List Email
Simian Substitute Site for July 2009: Where Are They Now? - Bubbles
Year Of The Monkey 2009: Half There In Helsinki 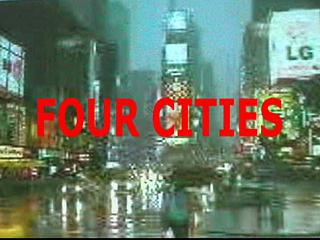 I started doing all this internet nonsense back in 1998: my first major holiday after that was my trip to America in 1999. During a crammed fortnight, I spent a few days apiece in New York, Washingdon DC, San Francisco and Los Angeles. I got two pieces for the site out of it: a review of the just-released Star Wars Episode I: The Phantom Menace, and a more general thing entitled Spankin' USA which became the first ever article in my Travel section.

It's a bit thin compared with the travel pieces that were to follow - I mean, it doesn't even tell you which hotels I stayed in. But you'll notice that there's a throwaway reference in there to a holiday video called Four Cities, which I promised I'd be showing to an invited audience of Spank's Pals on Independence Day weekend 1999.

Ten years later, I'm going to do that all over again. And this time, you're invited.

The video for my 1997 Hong Kong holiday notoriously took well over a year to complete, on and off. I was determined that I wouldn't end up like that again, so I set myself an incredibly tight deadline: I'd return from the States on June 6th, and I'd have a finished video ready to show people on the evening of July 3rd the same year. And I managed it, too.

Four Cities is a little more conducive to YouTubeisation than my Asian holiday videos from 1993 and 1997, thanks to its structure - it's basically four short films of around ten minutes apiece. The San Francisco section has been cut for length, and I've made tweaks to the New York and Los Angeles bits for, well, see if you can work out why: but this is pretty much the film I showed people at my house exactly ten years ago.

As loyal readers of this site, you're obviously entitled to a better service than the people who just follow me on YouTube: so you can watch Four Cities here with a bonus text-based director's commentary of sorts, in which I take the piss out of the snotty little oik I was ten years ago. Here we go, then.

0:01 - Not in the least bit over the top, I'm sure you'll agree. Music is Escape From New York by Nasty Rox Inc: video is from a speeded-up version of a trailer for Four Cities that I had on the web in the weeks leading up to that world premiere. Can't find the original video for the trailer, sorry.

0:11 - I'm rather pleased with the way that one turned out. You can probably guess how it was done with a moment's thought: I filmed from the front of the Staten Island Ferry as it approached Manhattan, and then reversed and sped up the shot. I found myself unable to remember after 9/11 if I'd ever got any footage of the World Trade Center - well, there it is, over on the left. (Plus a view from above the WTC, to come in a few minutes.)

0:59 - Still not really sure about the scrolling captions. The 1993 and 1997 videos had voiceover narration, which I've carefully deleted from the YouTube versions: but those captions are a lot harder to get rid of. It has to be said, there are a few occasions (like here) where the me from ten years ago sounds like a right dick. I'll be sure to point them up as we go.

1:14 - That rain was hell, as I mentioned in Spankin' USA at the time. That first shot was taken from the window of my room at the Holiday Inn Broadway, which nowadays appears to be the Radisson Martinique Broadway. I was doing this trip on a Kuoni package, and the hotels they'd lined up were a curiously variable mixture: the Holiday Inn was a bit basic, but you couldn't fault its 32nd and Broadway location.

1:56 - See separate Phantom Menace review for more details. As the queue footage shows, I actually saw it at the United Artists cinema (now the Regal) in Union Square, which is nowhere near Times Square. Still, never let the facts get in the way of a good link, eh?

2:45 - I think at this point, I was more fascinated by the idea that I could download a short film from the internet and incorporate it into my own video. Ayaz Asif, Ted Bracewell and Lincoln Gasking's Park Wars is still a thing of beauty, although it had more impact back when the Phantom Menace trailer was all over cinemas like a bad rash.

4:50 - Yes, I admit it, I did use Sir Georg Solti's version of Ride Of The Valkyries from the Apocalypse Now soundtrack. You can even still hear the battle noises in the mix.

8:34 - This was well before the days when London Underground started sponsoring buskers to play at their tube stations. Still, I believe Ted Williams is the only busker I've ever bought a cassette from afterwards.

3:38 - Must admit, I do have a soft spot for the Roosevelt Memorial, though it might just be because it looks great photographed at night.

4:32 - The National Air and Space Museum, accompanied by Music For 18 Musicians (Coldcut Remix) by Steve Reich And Musicians. And my bleedin' finger, again.

6:32 - I really shouldn't have been filming the Grandsons' lobby concert - in fact, if I had the guts, I'd have kept in the shot which ends with a security guard telling me to turn my camcorder off. Ten years on, the Kennedy Center amazingly still has an archive of their May 26th 1999 show in fuzzlicious RealVideo.

7:05 - Wooo, shit edit there. On the other hand, I have no idea now how I pulled off those cutaways in the Ted Williams bit of the New York section.

7:59 - And I managed to get through all of that without a single mention of my Washington hotel - the Omni Shoreham, probably the one hotel of the four that's changed the least over the last ten years. Quite swanky, but still capable of homely touches like a room service menu that includes bedtime milk and cookies, the perfect accompaniment to Letterman.

0:10 - I seem to be hitting a batting average of one act of dickishness per city, and this is the one for San Francisco. I filmed this guy from as far away as I could, and then when he spotted me I ran away without giving him any money. And still used the shot. Dick.

0:29 - The car chase joke was, I think, stolen directly from Roger Ebert's book Ebert's Bigger Little Movie Glossary, which I bought while I was there.

0:40 - The Commodore is probably the closest hotel of the four to the sort of quirky boutique place where The Belated Birthday Girl and I like to spend our hols these days. (Portishead for breakfast! How nineties.) So it freaked me out to discover that the Commodore is now student accommodation.

3:03 - I'm quite pleased with the use of the Alcatraz audio guide on the soundtrack here. I think Alcatraz is the first and only tourist attraction I've been to which has made its guide available to buy on tape - and, more importantly, it's the only one I would ever have considered buying. It's an atmospheric audio documentary that works just fine even away from the site.

4:29 - Yes, you're right, there's far too much Carnaval stuff here. As it stood, the San Francisco section of the original video came in at eleven and a half minutes, so I had to lose 90 seconds of this material just to keep within the YouTube limits. It's just more of the same, anyway. Although it's interesting to remember that I was single at the time, so look out closely for shots of attractive young women that are held just a fraction too long.

0:04 - Music is Rip Rip by David Holmes, from the Out Of Sight soundtrack (which explains the bits of dialogue that pop up here and there).

0:47 - The not-having-a-car-in-LA thing was made even worse by my staying at the Furama Hotel near the airport - a featureless dive whose only non-airport-related transport link was the bus out to Santa Monica and back. Since 1999, Furama appear to have pulled out of the American hotel market altogether: while the LA branch is now, to the delight of some former residents, a building site.

1:19 - Eventually, strolling around Santa Monica starts to pall a bit: especially after an incident when it started raining when I was out walking, and I pulled my trusty umbrella out of my bag, only to realise that everyone was staring at me because I was the only person in LA carrying an umbrella. So this was the point where I threw myself at the mercy of Kuoni's on-site representative, who lined up a couple of splendid all-day excursions to keep me happy. This bus trip around Hollywood and environs was the first...

3:05 ...and this visit to Universal Studios Hollywood was the second. It's possible that if you've not been there before, you may consider the rest of this video to contain SPOILERS for the various attractions at Universal, and might want to stop watching now. Of course, the attractions might have changed dramatically over the last ten years: but based on the evidence of Trey Parker and Matt Stone's short film Your Studio And You, they probably haven't. Music is Strobe's Nanafushi (Satori Mix) by Kodo, and I do like the way it keeps battling against the various bits of music from the rides themselves.

4:01 - Ahem. I think we can be sure by now that ten-years-ago me is in no position to be calling anyone else an arsehole.

6:16 - See New York, 8:00 above. By the way, here's a weird thing I discovered while uploading this: the Crimewatch mosaic effect is capable of actually breaking YouTube. When I loaded this up as an AVI file, the shot with the pixellation in it made the picture stretch in alarming fashion for the rest of the video. Seems okay as an MPEG, though. Apologies for geeking out a little there.

6:18 - Apologies for the low picture quality of the next sequence, which was filmed entirely through a see-through plastic cagoule for reasons which should become apparent...

8:27 - Two items present in the original video, but cut from here: a short epilogue where the LA bus driver takes a picture of me with the Hollywood sign way, way, way in the distance, and an end titles sequence containing all the music information listed above. I'd suggest that you hum Le Voyage De Penelope by Air to yourself while you imagine that. Being a monkey, and all.