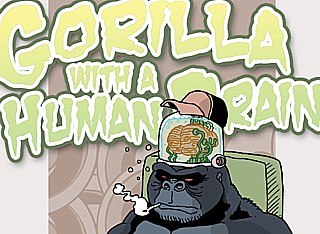 In the meantime, your Simian Substitute Site for August 2009 is Gorilla With A Human Brain. It's actually a discussion thread on Whitechapel, the internet forum presided over by Warren Ellis with his usual rod of iron and eels of arse. The members of Whitechapel include a large number of people who, like Warren, work in comic books for a living: so once a week, he gives them a project called Remake/Remodel. Warren introduces an out-of-copyright comics character, and asks artists to come up with their own interpretations. The descriptions can be very vague - here, for example, is this week's.

Hahaha I am a bastard. From BLUE BEETLE #9, in 1941; "Jack Castle was both a drunk and assistant to a mad scientist. He is knocked unconscious by the mad doctor, so Castle would not reveal the nature of the doctor's experiments to Elsa, the doctor's niece. Castle's brain is removed and then placed into the body of a gorilla. When he awakens from his operation, he seeks revenge. First, he kills the mad doctor, and then goes after his assistants hoping to be cured of his affliction."

That's all that the artists had to play with. But they're used to that by now. Read through the thread and see how they responded.

I know we've not really been short of comments for the last week or two, but as usual you can feel free to leave any general ones below. Go!

Hi Spank, know you are a fan of David Byrne whom you went to see at the South Bank. Just have to say that he has definitely been doing a pension tour, completely tarting himself around Italy, where he seemed to be playing in every ancient town and of course now in Herefordshire at the Big Chill. Only know one hit of his dating back eons to 1980 and that is really 30 years ago! :-)

Byrne's also taking pension contributions at the Roundhouse this month.

Hi Spank. Saw David Byrne at the the Big Chill. It turned out that was in fact his last concert of his world tour. But boy was he pissed off when they let the firework show off half way through his set. Also why did they want to to celebrate such a momentous occassion by wearing tu tu s for their encore? For all that it was a good set and I recognised more songs than I thought and wish that he has raised a suitable PENSION!

A nice person called Drink8AceDrink shot some HD quality videos at Big Chill, including this one: