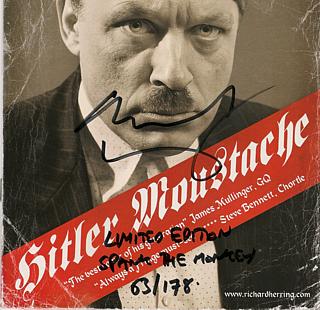 This is as close as I came to the Edinburgh Festival in 2009. I didn't get to see Richard Herring's Hitler Moustache, and neither did anyone else that I know: but I contributed £25 to his programme fund in aid of Scope, so he kindly gave me a namecheck inside the programme and sent me a copy he'd signed on the outside. Next time, I'll ask him to dedicate my programme to Lucky Winner Of eBay Auction.

Meanwhile, a group of Spank's Pals went up to the Festival without me this year. They've filed the following reports, starting with tour leader Nick.

If last year's festival had been dominated by the US election, no prizes for guessing it was the credit crunch that dominated proceedings this year. Edinburgh had expected a downturn and there were casualties. The e-tent on Princes Mall (a nice-to-have ticket collection point) got ditched to save money: the Spiegeltent in George Square (home to La Clique) was conveniently away being refurbished, to be replaced by the Hullabaloo tent, which was only slightly bigger than your average family tent with seats.

Mervyn Stutter’s Pick of the Fringe somehow got bumped to Hullabaloo from the gothic splendour of the Teviot, with Mervyn already promising a return to a real building next year. The biggest casualty however appeared to be serious theatre. Stutter’s big boast is his show is the only compilation show that includes serious theatre, but the Sunday and Monday shows saw no theatre at all, a telling comment on the precarious financial state of staging plays in smaller venues on the fringe.

So what of the shows? Once again our first night show flopped - Rhian knows our track record and sensibly went with Tom Wigglesworth, which proved a hit. This year it was the turn of John Bishop who did a storming show last year, but saddled with the Pleasance Cabaret Bar (we have seen Rich Hall and Andy Parsons struggle here) it never really took off. Best show of the week was an old standby Shakespeare for Breakfast, which was in inspired form this year. Turning the play within a play from A Midsummer Night's Dream into a surrealist piece featuring a pyramid and Frisbee (Pyramus and Thisbe, gettit?) was a stroke of genius.

Amongst the plethora of one man shows, special mention must go to Bob Golding for his tour de force in Morecambe. Such was his dexterity you were convinced at times there was more than one person on stage, with the part of Ernie being played by a ventriloquist doll. Morecambe joined a host of sellout shows this year, which undeniably creates a real buzz of anticipation, but not so good if you cannot get a ticket!

With our usual Napier flats unavailable this year, we opted instead for the student accommodation at Warrender Park Crescent. An old converted school building, it was the place where Muriel Spark taught and inspired her book The Prime of Miss Jean Brodie. I found the polished vinyl floors too institutional and no sinks in the bedrooms a drawback, but that said the views over the Meadows to the castle were outstanding. It only leaves me to nominate my restaurant of the week as the Spirit of Thai in Grindlay St, and my beer of the week as Brentwood’s Screaming Virgin (can only be from Essex!).

We trust our favourite monkey will be back to lead the troupe next year, now he has returned from looking at clouds in China.

Of the many bizarre shows on offer at the Fringe, some are more difficult to describe than others. When attending a show such as The Rap Guide to Evolution, it can be hard to explain afterwards what it is, let alone what makes it work.

Essentially, this is a fascinating talk on evolutionary science, anthropology, religion, philosophy, and morality; performed by a smart-looking Canadian man in his late 20’s. The speaker is clearly extremely well-informed and eager to share, with an obvious passion for his subject matter.

The organization of the show into separate chapters, their titles revealed on a series of presentation slides, further fosters the impression that this is some sort of academic talk. (The audience is also told – not without a hint of pride – that as the show has been vetted by the author’s biologist friend for rigorous scientific accuracy, it is essentially the only show at the Edinburgh Fringe which can claim to be “peer-reviewed”.)

To hear this highly charismatic and intelligent performer share his thoughts with the audience would make for an interesting enough hour. However, Baba Brinkman has merged this set of philosophical and scientific musings with his other great passion: verse, rhyme and rhythm.

So the icing on the cake is that practically every line spoken by this performer is rhymed, beautifully, with the next.

The effect is hypnotizing.

Brinkman seems incapable of communicating without lyricism; although the show is split into individual songs representing each chapter and idea (playfully drawing illustration and analogy from the most unexpected places), the conversational interludes that join the songs are also delivered in constant verse. A brief foray into improvisation – a mutation in his script, to illustrate mutation in lines of DNA code – confirms his considerable talent as a live performer.

Brinkman seems highly aware of his mixed audience, as well as the outlandishness of this whole idea. He slyly pre-empts the expected concerns of his critics during the opening set; clearly very aware of the various preconceptions attached to the word ‘rap’. No doubt he knows full-well that the phrase "The Rap Guide to…" would have a Radio 4 audience running for the hills. I half suspect that a more validation-hungry performer would have billed this show as "An Hour of Philosophical Poetry Celebrating the 200th Anniversary of Charles Darwin" - which is exactly what it is, but Brinkman sticks to his guns.

His educational agenda is twofold: to bring the beauty of Darwin’s theory to our ears with equally beautiful delivery; but also to validate rap as a mode of artistic expression. In a telling aside, he reveals that he thinks of Chaucer, Shakespeare, Keats and Eminem as being part of the same tradition (Brinkman’s previous show at Edinburgh was a rap adaptation of the Canterbury Tales- betraying his status as a holder of an M.A. in Medieval and Renaissance English Literature).

Of all the shows I saw at this year’s festival, The Rap Guide to Evolution provided the most rigorous workout for the brain. Ideas come thick and fast; never leaving the audience behind, but gently daring us to keep up. Brinkman frequently challenges our minds to move as quickly as his words. The audience leaves buzzing; despite the stuffy venue, it’s as though we have each received an exhilarating burst of oxygen to the brain.

As an expression of science through art, The Rap Guide to Evolution is a pretty remarkable achievement. Any fan of music or science, hip-hop or humanism, should consider this show essential viewing. Everyone else, should see it anyway. Your ideas might just evolve. 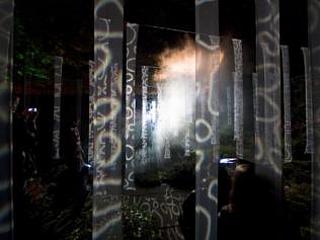 Is it really a year since I was sitting here reviewing our visit to the 2008 Fringe? Well, a lot can happen in a year - including the biggest recession anyone can remember. However, contrary to expectations of a decrease in numbers, this has turned out to be a bit of a boom year for the Fringe, and a record number of punters enjoying a “staycation” this summer made their way to Auld Reekie – no doubt lured by the additional attraction of a £5 Fringe and numerous free shows (and no cock-ups with the booking system this time!).

However, it was notable that there was an apparent lack of serious theatre in this year’s Fringe programme. Maybe it’s part of the credit crunch effect and it was felt more “crowd-pleasing” shows would attract the punters in these financially restricted times. Maybe things will change, and when times get better, people may be more inclined to put on more challenging theatre again.

Also, many of the theatre productions on my “to see” list were shown around the midday slot, which led to various timing clashes, and then gaps at other times of the day.

However, as always, Edinburgh worked its magic and once again a highly enjoyable week was had, including the following highlights:-

Once again, though, we had the “disappointing first night show” experience – this time with John Bishop. He is an engaging comic who was really entertaining last year, but this time he was hampered by performing in the Pleasance Cabaret Bar, where indulging in banter with a few audience members which many people can’t see or hear didn’t really hold my attention.

My “show I wish I had seen” award goes to Morecambe – I didn’t get my act together to book it before I left, and by the time I arrived tickets couldn’t be had for love nor money. (A few were released on the day, but were snapped up in about 10 seconds!)

And again, we were very well fed and watered in some of Edinburgh’s choice restaurants and bars, and made two new discoveries: The Cloisters in Brougham Street, which is a real pub with relaxed atmosphere and great real ales; and Gandhi’s, a very good quality and friendly Indian restaurant in East Fountainbridge (just a stone’s throw from Riego Street should we return there). However, the search for a decent late night venue goes on…

Finally, for anyone who’s up for a bit of tourism, we took part in an excellent (free) 2-hour tour of the Royal Mile, from the castle down to the new Parliament Building, with a very interesting and informative guide – strongly recommended for those who fancy a break from the shows.

Thanks to everyone for their company – only 50 weeks to go before a return visit!