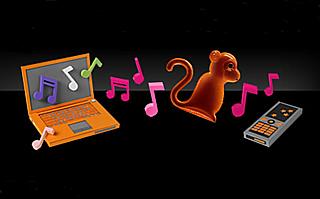 It's October, and you know what that means around here: the London Film Festival. I've been attending every year since 1989, and writing about it on a daily basis since 1998. Regular readers will know that throughout this year, I've been filling in the gaps with reviews of the 1989-1997 festivals as part of the Spank Gold project. There's just one more old LFF review to go - the one for 1997, which would have gone up yesterday if Demon's broadband service hadn't gone into meltdown first. Expect that to appear in the next day or two, and then regular daily coverage of the 2009 Festival to follow later this month. Have a trailer while you're waiting.

Other stuff for October? I doubt that there'll be enough time for anything else, but we'll have to wait and see. And yes, I do realise it's over two months since we came back from China, and the videos and photos aren't all up yet. Like I said, wait and see.

In the meantime, your Simian Substitute Site for October 2009 is Orange Monkey. If you were ever asked for a dictionary definition of the word 'monkey', I doubt you'd come up with the one given in the site FAQs: "Monkey's an animal package, like Dolphin, Canary, Racoon and Camel." But that's because you're a regular human being, rather than the sort of tosser who works for a mobile phone company.

Yes, it's that Orange. Monkey is a new tariff they've introduced which includes music downloads along with your call and text allowance, making it even easier for teenagers to annoy the tits off you on the top deck of a bus with their phones turned up to eleven. Still, if you want to find out more about how it works, they've got a demo of the Monkey Player, music playlists compiled by celebs, and the forms to sign up. Please note that other mobile phone operators are available, including good ones.

Anyway, enough of all that. How about some comments?