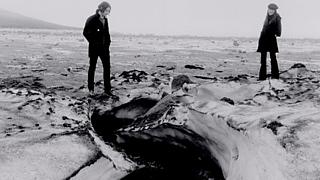 Documentaries are a film festival’s secret weapon: they stop it from becoming Just A Bunch Of People Seeing Lots Of Movies. Theatrical distribution of documentary films comes and goes in waves – some years we get loads of them, some years none at all – so festival screenings are frequently the only way these films get an audience. The London Film Festival’s documentary strand has always been a strong one, to the extent that in recent years one documentary has been highlighted for a full-on gala screening: but not this year. Is that an indication that it’s a poor year for them? And is it significant that of all the documentaries The Belated Birthday Girl and I are planning to see at this LFF, all bar one of them are music related?

To be honest, White Stripes: Under Great White Northern Lights is less of a music documentary and more of an old-fashioned band vanity project. Emmett Malloy’s film follows Jack and Meg White on their 2007 tour of Canada, during which they pledged to play at least one gig in every province and territory. Aside from the usual big halls you’d expect the band to play, they also do a whole series of last-minute sideshow gigs in unexpected venues – bowling alleys, youth centres, local parks. We also get to see them in their spare time exploring some of the sights.

Musically, it’s a blast, as you’d expect. In last night’s Oil City Confidential, there was an interesting story about the making of Dr Feelgood’s live album Stupidity. The sound engineers wanted a clean multi-track recording made through the mixing desk, but the band wanted to record the whole thing through a pair of microphones in the audience to recreate what they heard. The band won the argument, and were proved to be right: a great live album isn’t a note-perfect recreation of what was played on stage, it’s one that includes all the rough edges associated with music being created in the moment. A White Stripes gig is a filthy racket that’s almost – but not quite – on the verge of collapsing in on itself at any minute, and that comes across splendidly here, with some excellent footage of the band working at their peak. (Although nothing else in the film matches up to its opening sequence, taken from the final gig in the tour.)

The non-musical bits in the film are curiously uncomfortable, undercut by an interview with Jack White early on where he quotes a journalist as saying “the White Stripes are simultaneously more real and more fake than any other American rock band.” It’s a statement that puts you on your toes for the rest of the film, as it alerts you to the artifice that’s present in everything the White Stripes do. The way that Jack, in the same interview, keeps pushing the entertaining lie that Jack and Meg are brother and sister. Or the curious reluctance of Meg to say anything out loud in public, resulting in her few lines in the film having to be accompanied with subtitles. When the pair visit an Inuit old people’s home to swap songs with them, you’ve absolutely no idea how seriously to take it – are they genuinely interested in the music, or did they just think it would be a cool thing to do for the movie?

Still, if nothing else, it helps point up that every band-on-tour movie has the same level of fakery in it – all the White Stripes are doing is drawing your attention to it, which makes it a bit more interesting than a simple concert document. And even if that aspect of the film doesn’t convince you, it works just fine as a simple concert document too. Some more scenes from the sideshow gigs would have been welcome, though: they're easily the best bits of the film. 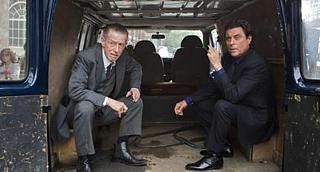 When we first meet up with Colin Diamond (Ray Winstone), he’s in a bad way. He’s just broken up with his wife Liz (Joanne Whalley) over an affair she’s been having with another man. Lying in the smashed-up remains of his living room with Nilsson’s Without You playing on a continuous loop, Colin needs help and he needs it fast. He gets it in the form of four of his oldest mates – Archie (Tom Wilkinson), Meredith (Ian McShane), Mal (Stephen Dillane) and Old Man Peanut (John Hurt) – and a plot involving the piece of furniture of the title. (Don’t worry, like you I thought for ages that it referred to Winstone. The thing that persuaded me otherwise was the promo leaflet handed out after the screening, which retells the film's backstory as a set of assembly instructions for the Ikea Fäkin Cnüt wardrobe.)

44 Inch Chest probably would have been a Gala screening, if Ray Winstone wasn’t filming in New Zealand right now. (He sent his amusingly insincere apologies via video.) It’s a British film with a stellar cast and a script from Louis Mellis and David Scinto, the guys who brought you Sexy Beast. That would lead you to expect 90 minutes of dodgy London geezers swearing their heads off, and you’d be right. But while Sexy Beast had a bit of cinematic ambition to it, 44 Inch Chest is almost entirely set in one room. It feels very much like a repurposed theatre script: the boxed-in setting, the long speeches, the visible break in the middle where the interval would go.

The only thing that really justifies this being on screen rather than on stage is the cast – no theatre on earth could get these five guys to commit simultaneously to an extended run, so this is the only opportunity we could have to see them tear into this script. And tear into it they do – John Hurt (who did make it along to the screening) describes it as ‘harsh poetry’, and both he and McShane visibly relish the chance to verbally behave as badly as they can. By comparison, Wilkinson and Dillane are merely providing support in the background, but it’s the dynamic between the four mates that gives the film its energy.

As for Winstone, he’s his usual reliable self, drawing on the vulnerability he tends to keep hidden and only bring out on special occasions. Nevertheless, his character is the weak link in the whole setup. Compared with the other four guys, he’s keeping things bottled in, and as a result we’re frequently left guessing what he’s really feeling. That makes for an interesting turn about three-quarters of the way through the film – roughly the point where director Malcolm Venville realises ‘hey, we’re not on stage, we can do anything’ – but that also marks the point where the film loses its focus, and never quite comes up with a convincing route to its ending. Nevertheless, up until then it’s good fun for lovers of blokey British acting and the C word. 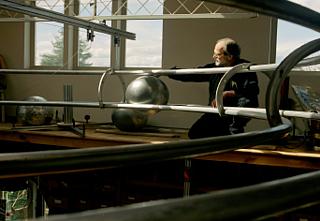 Is this another music documentary, then? It depends on whether you consider Trimpin to be a musician or not, and Peter Esmonde’s film isn’t entirely sure itself. Trimpin operates somewhere in the grey area between composer, instrument inventor, sound designer and installation artist. He builds complex machines out of junk that are capable of making ridiculously lovely noises, and exhibits them to the world. But until this film was made, the only way you could hear those noises was to be in the same room as one of those machines – Trimpin doesn’t believe in recording, or for that matter any technology that doesn’t require at least a building full of wires and crocodile clips.

Trimpin is a short film with a lot of delightful moments, but it’s a little lacking in a coherent structure. It skips around between Trimpin’s German childhood (before he moved to Seattle in the 80s), his early love of mechanically generated music (including his work with player piano composer Conlon Nancarrow), and the years of struggle before his success (he still has a filing cabinet full of what he quaintly calls ‘fuck you letters’). The closest thing to a through line in the film is the buildup to a concert he’s giving in collaboration with the Kronos Quartet. Despite Kronos' reputation for cutting-edge experimentation, it’s fun to watch them baulk at some of Trimpin’s wilder ideas, from the use of toy instruments (like a classier Kid Carpet) to the Pete Townshend-style destruction of a real violin at the climax.

What holds the film together is Trimpin himself, whose enthusiasm for what he does comes through every frame. As does his obsession – he doesn’t appear to have any life outside of his music, or at least is reluctant to admit it on camera. Esmonde manages to capture Trimpin’s childlike nature in several unguarded moments, where he picks up on a sound by accident – like the note he gets while cleaning what he originally thought was a percussion instrument, which sends him down a different path altogether. This is a man who, when he throws broken glass from a failed experiment into a bin, turns round as it hits the bottom of the bin and goes “hmmm…”

At the very least, this film documents some of Trimpin’s best work for those of us who’ll never get to see it in person. Inevitably, there are odd clips around on YouTube, notably a series shot when he was Artist In Residence at the University Of Michigan. But here we get to see the sheer scale of his installations, and hear them in 5.1 sound so they surround you the way they would in real life. If you’re looking for reasons why documentaries should be seen theatrically rather than on the telly, this counts as a pretty good example.