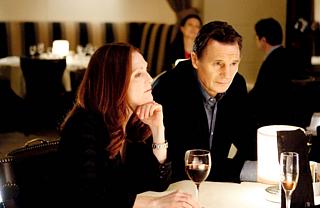 [Overheard at the entrance to the Vue West End cinema, from one of the security staff: “London Film Festival to the left, normal films to the right.”]

There are certain directors whose work I tend to associate with the LFF. Atom Egoyan really shouldn’t be one of them, but he is. He’d been having arthouse success for a good few years before I finally got around to catching up with him in 1994 with Exotica. I acquainted myself with his back catalogue fairly quickly after that – London still had a repertory cinema scene back then, and his older movies frequently turned up in double bills – and I’ve been following his career ever since, both in his frequent LFF appearances and elsewhere. Over the years you tend to spot a director’s themes and obsessions, so I’ve developed a simple rule relating to Egoyan films: if they’re not about Armenia, they’re about sex.

Chloe isn’t about Armenia. It focuses on a successful Toronto couple, as Egoyan isn’t about to leave his adopted homeland for Hollywood just yet. Catherine (Julianne Moore) is a gynaecologist, while David (Liam Neeson) is a music professor who frequently travels away from home. When David misses his surprise birthday party to spend extra-curricular time with a student, Catherine begins to worry that their marriage is on the rocks, and we begin to worry that this is just Egoyan working for hire on a story that anyone could have made. But then Catherine hires prostitute Chloe (Amanda Seyfried) to flirt with her husband and test his fidelity, and we realise why they hired Egoyan for the job.

For once, Egoyan is directing someone else’s script. Written by Erin Cressida Wilson, it’s actually an adaptation of a French film called Nathalie..., which FilmFan assures me isn’t very good at all (although it’s possible that the proverbial Shallow And Obvious Reasons might have been affecting his judgment). As the narrative slowly drifts into the areas of voyeurism and obsession, it’s easy to see why the director felt drawn to this material. But while he’s working though the darker elements, Moore and Neeson keep the story firmly on an emotional track, skilfully depicting a couple trying to work out where things went wrong for them.

Chloe herself is, of course, the wild card in the tale, and the reason why the story falters in the final stretch. It might just be possible to finish the film 15 minutes earlier than Egoyan does, and thus end up with a queasily fascinating study of the things couples will do to try and stay together. But by that point it’s drifted a little into thriller territory, and so Egoyan has to go all the way, diving headfirst into an incredibly silly climax - the only reason why David and Catherine are successful enough to live in a house with BIG WINDOWS. Pity, because up until then it could have been one of the director’s best films in a while. 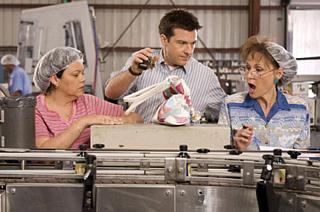 [Intermission 1: in between our first and second films of the day, we pop over to Pret A Manger for a coffee and a quick leech of their wi-fi. And after four and a half weeks of hammering the LFF booking site every day to see if any additional tickets have been released for the sold out Surprise Film, we finally strike lucky and discover that they’ve just freed up two rows worth. We grab a pair for ourselves, and tell a few close associates so they can get some too. If this was the sort of site that had a Twitter feed, I’d have told you too, but I don’t believe in that shit. Sorry. Oh, and I'm guessing Where The Wild Things Are, but I could be wrong.]

It’s a funny thing about Mike Judge: we have no problems seeing his TV work like Beavis And Butt-Head and King Of The Hill in the UK, but his movies inevitably end up going straight to video. (With one obvious exception, of course.) So the LFF screening of Extract had to be done, as a rare opportunity to catch one of his live-action features on a big screen.

Like Judge’s earlier film Office Space, it’s primarily set in the workplace: in this case, the food extract factory owned by Joel Reynold (Jason Bateman). It’s a small but successful business, which Joel’s on the verge of selling off for a tidy sum to spend more time with his wife Suzie (Kristen Wiig). But events conspire to put the sale in jeopardy: one of his workers threatens to sue him out of existence following an unpleasant breach of health and safety, while new recruit Cindy (Mila Kunis) is making Joel have second thoughts about how much time he wants to spend with his wife.

Over its thirteen seasons, King Of The Hill was notable for its affection for all of its characters, as well as its corking jokes: and Extract manages to translate both of those strengths into non-animated form. There are a large number of people on Joel’s factory floor, and Judge takes care to give them all an interesting personality and several comic moments apiece. (Including the director himself, in a heavily disguised cameo – but after a decade and a half of animation work, you could spot his voice anywhere.)

His leading players also do a fine job: notably Mila Kunis, who could have so easily been written as a stereotypical Bitch From Hell, but plays her role with enough charm to get you past her moral shortcomings. And there’s high-powered backup from a lovely pair of guest appearances - Gene Simmons as a lawyer so sleazy that my Lionel Hutz/Clarence Darrow comparison from yesterday becomes worthless, and Ben Affleck in a scene-stealing turn as Joel’s barman buddy Dean.

It’s Dean who provides this film with the one outright peculiar moment of the day, really just an accident of scheduling more than anything else. Because he’s the one who comes up with the idea to help Joel with his dilemma over Cindy: hire a gigolo to flirt with his wife and test her fidelity. You know, the same plot they used in Chloe a couple of hours earlier. The Belated Birthday Girl and I subsequently discussed this, and we decided that if we ever end up in relationship difficulties, we’ll go for the compromise solution of hiring a prostitute and a gigolo to secretly sleep with each other. 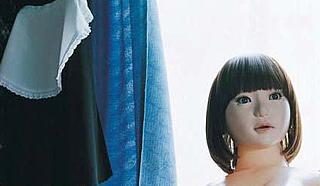 [Intermission 2: in between our second and third films of the day, we go to Asia de Cuba (already one of our favourite London restaurants) to take advantage of their LFF cheap set menu. Well, it's cheap when compared to their usual prices. Anyway, while we're there, we spot one of our favourite LFF staffers tucking into the restaurant’s excellent Asian/South American fusion cuisine. Don’t spend too long in there, Michael, or else we’ll have to stop calling you Low Fat Morrissey and start calling you Morrissey.]

When you’re seeing lots of obscure and unfamiliar films at the LFF, it always helps to have at least a couple with a conversation-stopping one-line plot synopsis, for when you’re talking about them to mates. I know at least one of Spank’s Pals has been using the synopsis of Air Doll for precisely that purpose recently. So let’s try it: the new film from Hirokazu Kore-eda (director of LFF 2008 highlight Still Walking) is about an inflatable sex doll that comes to life. I believe I have your attention now.

Beyond that one-liner, I wasn’t really sure what to expect from Air Doll. Obviously, you could play a premise like that for cheap dirty laughs, but I suspected that wasn’t Kore-eda’s style. Nevertheless, I wasn’t expecting E.T. with a washable vagina, which is more or less how Nozomi (Bae Doo-Na) is depicted here. By night, she’s a static fixture in the bed of her owner: but by day, she goes out into the world and explores it with wide-eyed, open-mouthed fascination (after all, that’s how she was built). Before too long she’s got herself a day job in a video shop, and a burgeoning relationship with co-worker Junichi (Arata).

It’s not really like anything else Kore-eda has made before, but then again none of his films ever are: the only thing any of them tend to have in common is an amusing cameo performance by Susumu Terajima, this time as the local policeman who’s a fan of dirty cop movies. But it’s interesting to see that Nozomi’s voyage of discovery isn’t the main focus of the movie. She’s told on a couple of occasions that her situation isn’t that unusual. Very slowly – initially in unexplained single-shot cutaways, more so as the film progresses – we realize that this is meant metaphorically. There are lots of people alone in the big city, all of whom feel empty inside, all of whom are looking for substitutes for a connection with another human being.

That’s an awful lot of symbolic weight to be resting on the shoulders of a blown-up bit of rubber, and I suspect many actresses wouldn’t be up to the challenge. But Bae Doo-Na rises to it magnificently. Without overplaying it, she pulls off the transition from unalloyed wonder at the world, to sadness once she discovers its true nature. Her vulnerability gives us a real emotional connection to her story (you wouldn’t believe the noise the audience made at this screening when Nozomi first discovers the properties of sharp objects), and carries us through to a surprisingly moving conclusion. As fables go, this one’s pretty fabulous.

I recently came across your blog and have been reading along. I thought I would leave my first comment. I don’t know what to say except that I have enjoyed reading. Nice blog. I will keep visiting this blog very often.