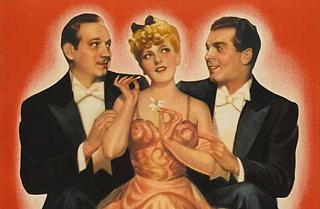 They’ve been one of my favourite double acts at the London Film Festival for some time now. Clyde Jeavons, programmer of the Treasures From The Archive strand, who each year brings us a selection of beautifully restored old movies: and Grover Crisp of the Sony-Columbia film restoration department. Each year, Jeavons invariably chooses a few of the latest Sony-Columbia restoration projects for the LFF, and Crisp invariably comes over to give a short talk about how he had to fish all the old negatives out of dustbins and clean them up by hand. But not this year, sadly: Crisp has had to call off his annual visit due to “dental issues”. Get well soon, Grover.

In the meantime, we still get to see the films he’s been working on with his team: including Too Many Husbands, a 1940 comedy so obscure that Jeavons still hasn’t found anyone who saw it in the UK on its original release. Vicky Lowndes (Jean Arthur) doesn’t seem to have much luck with husbands: her first one Bill (Fred MacMurray) was a compulsive solo traveller who subsequently died at sea, while her second one Henry (Melvyn Douglas) spends too much time in his publishing job to pay her any attention. But her biggest problem of all suddenly emerges after six months of marriage to Henry: Bill didn’t actually die.

As Jeavons suggested in his introduction, this was a curiously resonant theme for a fluffy romantic comedy: a couple of years later, men would be coming back from the war to find their sweethearts had left them for dead and taken up with someone else. But in 1940, you could play the situation completely for laughs. As you’d imagine, there’s robust farce to be had from the early stages where Bill and Henry are unaware of each others’ presence, and later on when the two of them are fighting for Vicky’s affections. What I wasn’t expecting were the frequent suggestions that Vicky doesn’t necessarily feel she has to choose – and not particularly subtle suggestions, either.

Still, that’s the sort of trouble Hollywood gets into when it adapts stories by filthy depraved foreigners – in this case, W Somerset Maugham, whose play Home And Beauty was the original inspiration for Wesley Ruggles’ surprisingly cheeky comedy, and actually was about a woman thinking she'd lost her husband in a war. Maybe we Brits are just more pragmatic about this sort of thing: after all, when the film came out over here, it was given the much less judgemental title of My Two Husbands.

Either way, it still works today, mainly because of the surprise at discovering that the female characters are much more willing to accept a fluid marital arrangement than the men. The top-notch trio of leads are given excellent support from Harry Davenport as Vicky’s father, and Dorothy Peterson as a secretary who insists that Vicky “married the only two men I ever loved” and shares her peculiar fantasies about them both. Were all women total hornbags in the forties, then? 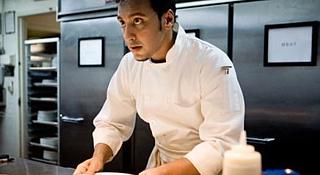 This was one of the three or four films I missed out on thanks to postal delays, so The Belated Birthday Girl and I decided to make this our first visit to the LFF returns queue. For those of you unfamiliar with the system: even when a film’s sold out, a proportion of the tickets are ones that have been put aside for freeloaders with press passes. Because journalists are a lazy, feckless lot, frequently they won’t bother collecting their tickets, so the box office can make them available to paying punters in the half hour before a screening. It’s a slow and painful process, though: as they were announcing the five minute call for Today’s Special, they’d only reallocated eight tickets, and still weren’t sure just how many they had left. Which was incredibly nerve-wracking for the people who were in the front of the queue at the time, i.e. us.

Still, as you can gather from the presence of a review, we managed to bagsy the last couple of tickets for this sold-out world premiere screening. But I still haven’t managed to work out why it was so rammed in the first place. As I asked back at the start of the festival, is writer/star Aasif Mandvi really that popular? The audience didn’t seem to be one that was already familiar with his work on The Daily Show. Maybe it was just the theme that sold it to people: after all, nobody ever went broke making movies using food as a metaphor for the immigrant experience.

Mandvi plays Samir, the Indian sous-chef at a swanky New York restaurant. Fed up that his career isn’t going anywhere, and frustrated by the way his parents (Madhur Jaffrey and Harish Patel) keep interfering, he makes plans for a fresh start in Paris. But those plans are suddenly put on hold when his dad takes ill, and Samir has to take over the tatty family curry house. It turns out to be precisely the fresh start he was looking for, aided by a chance encounter with taxi driver and possible serial fantasist Akbar (Naseeruddin Shah).

As co-writer Jonathan Bines admitted in the Q&A, this isn’t the most original premise for a film: food movies are a genre in their own right, with defined rules and structure, and if you move too far away from the expected narrative arc they just feel wrong. But Today’s Special is a nicely low-key example of the genre, which – like its main character – succeeds thanks to hard work and natural charm. Apart from some early heavy-handed scenes illustrating Samir’s inability to communicate with his family, the drama is realistically and non-melodramatically played out. Even the least sympathetic character (a fun cameo from Dean “Ryan O’Reilly” Winters as a head chef) turns out to be just giving Samir the career advice he needs, only with penile metaphors. And the jokes are nicely crafted: there’s a cherishable scene where Samir encounters a pair of tearful diners that I’ve just decided not to spoil for you, so forget everything I said after that colon. 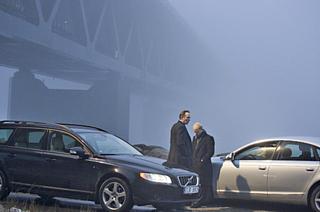 It looks like George Clooney wasn't at the Vue for tonight's Gala of Up In The Air – after two nights on the red carpet in London, he went to Rome for the weekend instead. But while Jason Reitman’s downsizing comedy was playing, there were more serious corporate shenanigans going on down the road at the ICA - Danish ones, in fact. I’m not sure how closely my interest in Danish cinema maps onto our holiday in Copenhagen two years ago, but it’s nice that writer/director Rumle Hammerich threw in a few locations that I recognised from back then.

Martin Vinge (Lars Mikkelsen, brother of the more famous Mads) is the headhunter of the title, one of the best in the country. He’s approached by NF Sieger (Henning Moritzen), head of a shipping corporation “bigger than Microsoft”, with a thankless proposition: find a new CEO who could do the job better than his son Daniel (Flemming Enevold). Vinge knows the risks of avoiding the family bloodline in situations like this, which is why he’s reluctant to take the job: but when the Sieger company starts providing free medical support for his own hospitalised son, he finds it hard to refuse. When Vinge is approached by Daniel with a counter-offer of employment, it becomes apparent that there’s more going on than people are telling him.

At the Q&A afterwards, one audience member suggested that “if this was made by Americans, it wouldn’t be as good,” which is precisely the sort of smug quasi-racist bollocks that people say at Q&As like this. If Headhunter was made by Americans, it probably wouldn’t be all that much different. Hammerich gives it the sleek cool blue look that we’ve come to expect from corporate thrillers, and extracts a fair amount of dramatic tension from Vinge’s struggle to work out just who he can trust. Possibly the lack of violent action differentiates this from Hollywood: even so, there’s a clumsy throwaway reference to Vinge’s military past, which is used to justify a fight scene later on.

But it’s still a fine example of the genre all the same. Mikkelsen turns out to be as fine an actor as his brother, conveying Vinge’s torment in the face of what NF Sieger refers to as “the new morality”. Virtually every other character has to play their cards close to the chest to give Vinge something to be tormented about, and they do that just fine. And there’s some deeply cynical comedy that emerges as the plot unfolds, and Vinge realises exactly what he’s got himself into. Would an American remake shy away from Hammerich’s conclusion here? I’d actually be curious to find out. But see the original anyway, obviously.