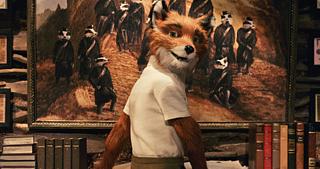 Here’s the subtext of yesterday’s Opening Gala report. Five people wanted to see Fantastic Mr Fox – myself, The Belated Birthday Girl, Seapea, Grizelda and Kate. Because my order got lost in the postal strike, we only ended up with four tickets (and huge thanks to Jon and The BBG for getting those, by the way). So I decided to step aside and let the four girls have their fun on a Sex And The City style night out with Clooney. Which, I guess, makes me the gay man who writes Sex And The City and makes them all say bitchy things.

Besides, I knew I’d have other opportunities to see the film. Okay, this matinee screening had absolutely nobody famous in attendance, but it only cost around a quarter of the price of the Gala, so I can’t complain. At £7 a pop (half the price of a normal ticket in the Vue West End), it’s no surprise that the matinee was sold out, with a fair few seats occupied by kids. “I’m looking forward to this,” said one mother to her sprog before it started, “it’ll be like Kung Fu Panda.” Really? Really?

Wes Anderson’s first animated feature, hand-built by the finest animators in the land of East London, doesn’t have any of the CGI slickness of Kung Fu Panda or its recent relatives. How that’ll play to a younger audience, I really have no idea. But to grown-ups like myself - and, probably, like that mother who was stuggling for a reference point her child would understand - the choppy twelve-frames-a-second stop-motion style brings back happy memories of what animation used to be like, when it wasn’t considered a weakness if you could detect the human presence behind the movement. (Those internet whingers I mentioned yesterday? I suspect that if you showed them a couple of minutes of an Oliver Postgate classic like Clangers, you could actually kill them with it.)

Like most of the crew who saw the film yesterday, I have no experience of Roald Dahl’s original (and I’m looking forward to the CD of Dahl’s reading of the book that’s going to be in this Saturday’s Guardian). So I’ve no idea how faithful Anderson’s adaptation is to the source: although it’s gratifying to see that Dahl gets the first credit in the end roll, before the director or any of the stars. There are odd little bits in the story that don’t quite ring true - to be childishly reductive about it, the soppy family relationship stuff, which reads a little too much like it came out of a Robert McKee screenwriting course. The more cartoony the plotting and emotions, the better. I’d imagine if I was a kid, I’d be loving the relentless escalation of the war between Mr Fox (George Clooney) and Farmer Bean (Michael Gambon), and drifting off a bit whenever Fox was trying to have heart-to-heart talks with his emo son Ash (Jason Schwartzman).

Those quibbles aside, it’s a delight from start to finish. The look of the film is terrific, and entirely its own: from the bristling fur of the animals (shades of Jan Swankmajer, and that’s not a comparison I was expecting to make) to the epic sweep of the sets. The voice cast are all obviously having tremendous fun, and that lifts the film up a couple of notches in itself. And even though he allegedly dictated the look of the movie from several hundred miles away by a series of emails, it still has the visual trademarks we’ve come to expect from Anderson: the surprisingly intense close-ups, the joyous lateral tracking shots. Clooney signed up for the film without knowing how it could play to both adult and child audiences: I don’t have any idea myself, but it works just fine for me. 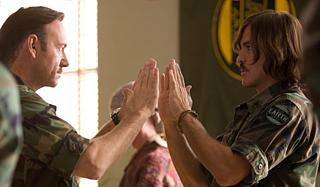 7.00pm: The Men Who Stare At Goats (official site)

As everyone has noticed by now, this is George Clooney’s Festival. He’s got three Gala films in the lineup: Fantastic Mr Fox, The Men Who Stare At Goats, and Jason Reitman’s Up In The Air. You suspect that even the LFF staff realise the last one will be a hard sell – it’s the only one of the three that they’re advertising with a big poster campaign. A film about a corporate downsizer who discovers his basic humanity? Given the number of people being made redundant nowadays, it’s surprising nobody’s considered the commercial appeal of a film about a corporate downsizer being hit repeatedly in the face with a baseball bat for two hours.

Obviously, that one wouldn’t have George in the lead. He’s a popular chap, as can be gathered from the crowds lining Leicester Square for the second night running. This time round I get to walk the red carpet alongside The Belated Birthday Girl, and gorge myself on free chocolate, popcorn and water while the various guests from The Men Who Stare At Goats goof around on stage. It’s strange seeing Jon Ronson (author of the book which ‘inspired’ the film) up there alongside one of the biggest movie stars on the planet. I remember his humble beginnings as a columnist for Manchester listings mag City Life, and – in his spare time – as Frank Sidebottom’s keyboard player. That’s a hell of a jump in twenty years: from playing gigs at The Cricketers, to nervously talking at the Odeon Leicester Square while George Clooney buggers around with his microphone stand.

I haven’t read The Men Who Stare At Goats, but I’d be curious to see how that ‘inspired by’ credit works. As far as I understand, the book is a typical piece of Ronson reportage where he talks to a group of American soldiers claiming to be members of a defunct paranormal operations squadron. Grant Heslov’s movie has taken two of the interviewees from the book – Lyn Cassady and Bill Django - and built an entirely fictional story about their lives. While covering the 2003 Iraq war, reporter Bob Wilton (Ewan McGregor) meets up with the mysterious Cassady (George Clooney), a contractor who claims to be on some sort of secret mission. It gradually emerges that Cassady used to be part of a special unit set up in the seventies by Bill Django (Jeff Bridges): a group of super-soldiers who could read minds and kill animals purely by thought. But just how mental are Cassady’s mental abilities?

Heslov describes Goats as ‘the first feelgood war movie’, which hints at the internal contradictions that make it both fascinating and a little bit of a mess. Jon Ronson’s journalism is knife-edge stuff - never explicitly taking the piss out of his subjects, he’s content to stand back and give them enough rope to hang themselves. It’s a very precise tone that the film doesn’t even attempt to replicate. Instead, it uses a number of devices to distance itself from the sheer insanity of the story that Cassady tells to Wilton. The chief device is a series of stunt casting decisions that end up damaging any credibility the story might have had. It’s fun to see Jeff Bridges playing the spaced-out soldier Django as The Dude Lebowski in combat fatigues: less so when Clooney repeatedly refers to his super-soldiers as Jedis, as he talks to an actor better known as the young Obi-Wan Kenobi.

And yet, despite the nudge-nudge casting and the bewildering array of timeframes that the story leaps between, it somehow just about holds together. The black comedy of Django’s plan for a Mentalist Peace Corps plays less of a part as the film progresses, and it becomes the story of sixties hippy ideals (embodied by Bridges) coming together with seventies pragmatism (in the shape of Clooney). This seems to be the obvious reading of the film later on, when Kevin Spacey comes on board effectively playing The 1980s, looking for ways to exploit these powers less peacefully.

As with Mr Fox, it’s difficult to know how much or how little resemblance this bears to the original source material. But The BBG’s line on this conundrum has always been, who cares? The key question is whether or not Goats works as a standalone movie. I’d say that it does: there are enough big laugh-out-loud moments and visual delights (notably some beautiful desert locations) to get over any concerns you may have about how much relation any of this has to the truth. Maybe this is what Clooney does now: donates his star power to films that may not look on paper to have an obvious, clearly defined audience. Suddenly, Up In The Air is starting to make a little more sense.

Suzanne Vega Fanclub - There was definitely a story in there somewhere, so I will try to be quick. Boy and girl survive parents after car versus truck horror. Later and all grown up, they move in together in Tokyo. She is a lap dancer, he is a small time drug dealer. He gets shot dead by police in a toilet. His ghost follows her and assorted others here and there.

Mind you none of that actually gets shown in anything remotely resembling a chronological order or coherent structure. Rather it is just a mishmash of druggie, blurry, camera swirling, fairground psychedelia. Despite the guy introducing it doing his best to big it all up, this was neither provocative or ground breaking. Instead, merely a tedium inducing endurance test. Thus one was so beaten over the head with the signposted ending for the last hour, I began to feel I had concussion (Tibetan Book of the Dead - my arse).

Enter The Void? Instead make it One To Avoid.