Reviewed today: Animation Panorama, At The End Of Daybreak, London Moves Me. 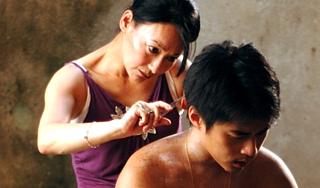 “So does that mean you’ll have to review thirty-nine films today?” asked The Belated Birthday Girl. Well, I suspect there’ll be the odd one skipped here and there. Let’s start with the longest film of the day and see how we get on.

At The End Of Daybreak is a typical boy-meets-girl story from Malaysia. Tuck Chai (Chui Tien-You) is the boy, Ying (Jane Ng) is the girl, and they’re regularly sneaking off from home to meet up secretly in hotel rooms. What’s the problem? Well, Tuck Chai is still living at home with his mum at the age of 23, because he’s a bit uncertain about what to do with his life. Ying is living with her parents too, but that’s because she’s under 16 and still at school. This affair isn’t destined to end well.

Tony Rayns (still no sign of him, by the way) describes Ho Yuhang’s movie as a modern film noir, and that’s definitely what it feels like to me. From a simple basic situation, two people make a couple of tiny mistakes and watch their lives spiral terrifyingly out of control. Ho builds up the tension skilfully, aided by some fine performances, including a terrific one from Wai Ying-Hung as Tuck Chai’s mother. Back in the eighties she used to be known as Hui Ying-Hung, or Kara Hui, and was one of Shaw Brothers’ top kung fu stars. Based on the evidence of this film and Legendary Assassin, she’s developed a fine second career playing maternal figures. It just feels a little weird when she’s attacked at one point in Daybreak, because you keep waiting for her to beat the crap out of the guy.

This being noir, eventually there comes a time where the story topples into melodrama, as Tuck Chai and Ying hit a point of no return. And although it’s inevitable, that’s the point where I suddenly stopped liking the film as much as I was earlier on. It was interesting to discover afterwards that The BBG felt the same way. Her take on it was that she was enjoying spending time with the characters, flawed as they were, and didn’t want to see them forced into those sorts of decisions. I’m not convinced that I was that emotionally involved: for me, it was more that once that line had been crossed, the movie became a bit more predictable. Nevertheless, for the most part it’s an intriguing story well told. 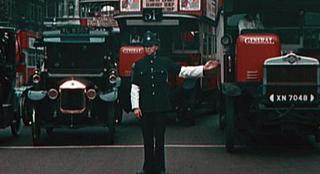 Time for the annual open-air free screening at Trafalgar Square: The BBG and I dashed round there immediately after At The End Of Daybreak, and were delighted to arrive just as they were setting up the giant inflatable screen. Sadly, it looks like they use a electrical pump to inflate it, rather that the two BFI interns blowing it up with their mouths that I’d been imagining.

This year’s programme, London Moves Me, is a collection of 29 film clips based around the theme of transport in London. The clips are arranged in chronological order, dating from 1896 to the present day, so they become a historical document of both the times they depict and the cinema techniques of those times. (I recently acquired a BFI DVD set that tells a similar story, but through the medium of shagging rather than transport.) Roughly half the footage shown is silent, which means that we can once more marvel at Neil Brand’s ability to improvise a piano score as the films play in front of him. I can appreciate that he can pick up rough cues from the start of a clip, but how on earth does he get his pieces to end at the right time? It’s a question we’ll return to tomorrow, I’d imagine.

Anyway, the early pre-1900 clips are obviously pretty basic: single shots with a fixed camera showing street scenes at locations from Hyde Park to Seven Sisters Road. Quickly, filmmakers realise that you can get some interesting effects by putting the camera on a vehicle, so we get quite a few pieces shot from the top of a tram, or on a boat. After a dozen or so rapid clips, the first lengthy film in the programme is Barging Through London, a 1924 journey down Regent’s Canal that by comparison appears to be taking place more or less in real time. Still, it shows off Neil Brand’s improvisational skills to the max, and he gets his first round of applause at the end of it.

There’s some fascinating material in the silent section of the programme, mainly involving unusual transport methods: gas-powered charabancs with huge bags on the top, or the R101 airship drifting serenely over the capital. But the clip that gets the biggest gasp is the excerpt from Claude Friese-Greene’s The Open Road, because of the sudden transition from black and white to beautifully preserved colour. It still looks staggering today, and provides the best freakout moment of the evening when we get a shot of Trafalgar Square in 1926, from the opposite angle to the one we’re looking at in 2009.

Once we move to the talkies and the post-WW2 era, things aren’t quite so visually exciting, but we have the stilted charms of newsreel commentary to compensate. The 1950 extract from Cinegazette No. 8, marking the scrapping of London’s trams and their replacement by buses, is notable for its astonishing heartlessness at the destruction of an entire mode of transport: while Under Night Streets is a 1958 short depicting the lives of the London Underground night workers, with a voiceover emphasizing what delightful salt-of-the-earth working class types they all are. (Based on all the other references to this film I can find on the internet, apparently I have to note here that the women who removed dirt from the tracks overnight were known as ‘fluffers’, and snigger a bit.)

As we approach the end of the show, there are a couple of bits of prime sixties kitsch: a large chunk of Douglas Hickox’s delightfully bonkers musical Les Bicyclettes De Belsize, and a groovy London Underground ad describing how the new ticket barriers work. We finally come up to date with Yohan Forbes’ Project One, a 2009 short following a skateboarder from the Thames Barrier to that bit on the South Bank where they all hang out. The nighttime shots of London don’t quite work in the lit-up environment of Trafalgar Square, and Forbes seems reluctant to dwell on any of the obvious landmarks on his route – which is unusual, given that it’s been preceded by 90 minutes of films that show those landmarks off at every possible opportunity. Still, it makes for a nice wrap-up to an excellent collection of shorts. And the bittiness continues back at BFI Southbank, where we have the annual collection of nine animated shorts from all over the world. If we’re looking out for trends, then I’d suggest there’s much more emphasis on narrative in this year’s programme, although one of my favourites - What Light - is an abstract film that wins out on sheer, extraordinary technique. Let’s take them in the order they were shown, as I’m in a hurry.

Signe Baumane’s Birth makes for an entertainingly callous opening to the programme: a girl discovers she’s pregnant, and her various relatives and friends queue up to tell her horror stories of what to expect. Hyebin Lee’s Cherry On The Cake takes a more sympathetic view of young girls growing up, showing its protagonist shrinking almost to nothing as she’s ignored by her family on her birthday. This one has a very nice look to it, mixing 2-D characters and 3-D backgrounds effectively. Daniel Greaves has appeared in these programmes several times now, and his contribution Speechless uses some smart framing to punch up its story of a family who can only communicate in text messages. Call in the Orange Film Board!

Steve Subotnick’s Jelly Fishers is probably the least successful film for me: its story of undersea life isn’t especially gripping, and the visuals aren’t strong enough to compensate for that. Neither of those are accusations that could be aimed at Jonas Odell’s Lies, which tells three stories of lying using three very different mixed media styles. With its technically accomplished look and strong visual wit, it’s probably my favourite of the programme. By comparison, Elodie Bouedec’s Malban may be strong on atmosphere, but it's a little too short on narrative drive at this point in the proceedings.

Three films by students from the Royal College of Art finish off the programme. The first two directors are present at this evening’s screening, and luckily for them both their films go down well. David Lopez Retamero’s Sam’s Hot Dogs is far and away the silliest film of the evening, about a hot dog vendor, his adopted bear, and how it affects his relationships with women. Sarah Wickens' What Light (Through Yonder Window Breaks) is an astonishing technical achievement, made from time lapse photography of images from sunlight as it moves through a room during the day. By comparison, Rafael Sommerhalder’s Wolves may be more conventionally animated, but its story of unrequited love has shedloads of charm – and its tube setting means it could have happily played in Trafalgar Square earlier this evening.

Outstanding weblinks: The Open Road and Barging through London.

My pleasure, Suze. Has to be said, they looked even better on the big screen. I'd imagine catching them on the tellies at the BFI Southbank Mediatheque would be a good compromise, though.