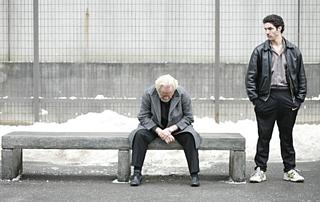 Fifteen days down, one to go. It’s the final night of the London Film Festival: what do you go and see? Generally, I find there are two possibilities. The first is the Closing Gala, obviously: but Sam Taylor-Wood’s Lennon biopic didn’t really appeal to me this year. The other alternative is to keep an eye on the TBC programme slots for the final day, which are used for last-minute extra screenings of the most popular films in the Festival.

This year, they’ve taken the smart step of dedicating four of those slots to the winners of the LFF Awards, which were only announced last night (while we were seeing Bare Essence Of Life). Three of the awards have been going for ages: the Grierson for best documentary (won by Defamation, which The Belated Birthday Girl reports on below), the Sutherland for best first feature (Ajami), and the Best British Newcomer (The Scouting Book For Boys). But we have a new award this year: the Best Film, chosen by an impressively star-studded jury from a shortlist which curiously seemed to be made up primarily of films from the Gala screenings. And the winner is… Jacques Audiard’s A Prophet, which I told you on Monday I was already keen to see.

Malik (Tahar Rahim) is a young French Arabic man who’s been sent to jail for assaulting a cop. When he first enters prison, it looks unlikely that he’ll survive his six year sentence: he’s naïve, easily bullied, and unable to read or write. But as a fellow inmate tells him, “the trick is to come out smarter than you went in.” So Malik uses his time in the nick to get himself a formal education. However, an encounter with the Corsican prisoner faction led by Cesar Luciani (Niels Arestrup) will send him on a second parallel education track, a fast stream to something a lot more dangerous.

In the early stages, the closest comparison point I could come up with was the prison TV show Oz. Part of that comes from the strict ethnic lines that the prison community is divided along – and one trick Malik discovers quite early on is that he can use his mixed race background to straddle those lines to his best advantage. But in the early stages, it also looks like the film will share Oz’s proclivity for gruelling violence, as its entire first act is dedicated to the agonisingly slow planning and execution of a single murder. It’s a smart bit of misdirection by Audiard: we spend more time on this killing than on any other violent act in the film, because it’s going to have repercussions on Malik for literally years to come. A Prophet is nothing if not rigorous on the consequences of people’s actions.

Frenchmen In Prison appears to be as prevalent a genre this year as Women In Prison was in the seventies, but Audiard’s movie is in a class of its own. It’s a long film – two and a half hours, in fact – but it uses that length to show us precisely how Malik evolves during his years in jail. Tahar Rahim’s stunning lead performance holds this epic tale together: he’s frequently got to act impassively as he tries to remember who he’s lying to today, which means that when emotion suddenly appears on his face – as in the scene where he travels on a plane for the first time – it has tremendous impact.

The best of this year’s LFF films have performed a neat balancing act between arthouse concerns and populist entertainment, and A Prophet is definitely up there with the best. It’s a thrilling and tautly directed crime drama, which takes the time to make its characters impressively detailed rather than mere archetypes. But is it the best film of LFF 2009? Come back in a week or so for The Wrap Party, and we can discuss that then. But in the meantime, I think I need a wee rest.

The Belated Birthday Girl - Following his 2003 debut documentary Checkpoint which showed the lives of both Palestinians and Israeli soldiers at the checkpoints in the occupied territories, Yoav Shamir was apparently likened by an American Jewish reviewer to Mel Gibson. Shamir wondered how he, an Israeli Jew who lives in Israel and has served his military duty, could be effectively accused of Anti-Semitism by an American Jew, and what exactly Anti-Semitism means today. And so he was prompted to start work on his latest documentary, Defamation, which looks at this question.

In it, he spends time with the Anti-Defamation League in America, and meets and discusses Anti-Semitism with a wide range of people, Jew and non-Jew, in Israel, America and Europe. His thoughtful and entertaining documentary raises questions about what Anti-Semitism, and in particular what is known as “New Anti-Semitism” is, and what it really means to Jews around the world today.

To me, the most disturbing part of the film was following a party of Israeli school students on a trip to Poland to visit Holocaust sites. Shamir accompanies them from their preparations in Israel, and throughout the trip, culminating in a visit to Auschwitz. What we see from the views expressed before they left, through to the attitudes of the teachers and secret service agents accompanying them, seems far from healthy, and is absolutely eye-opening. A telling episode is where some old Polish men sat on a bench ask a couple of the students, in Polish, if they are Israeli. As the students speak no Polish, all they pick up on is the word “Israeli”, and so primed are they to expect hatred, they are convinced that the old men were insulting them.

A central thesis of the film was that certain American Zionist groups and certain elements of the Zionist right-wing in Israel, by constantly concentrating on perceived Anti-Semitism, are stifling debate and progress. By even raising questions of the relationship between Anti-Semitism and Anti-Zionism, Shamir risks being accused of being at best deluded or even of being a “self-hating Jew”.

Although clearly a film made from a particular point of view, Shamir never dismisses or belittles the opinions of those he meets, but he is willing to challenge views directly on occasion. And he certainly does not take lightly the significance of the Nazi Holocaust, and has great respect for those, like the ADL's Abe Foxman, who lived through it. He simply believes that the emphasis placed on the past does not help for the future. And while he did encounter cases of Anti-Semitic actions and attitudes, he also found those inside the Jewish communities who felt that not every attack on a Jew should automatically be assumed to be motivated by Anti-Semitism.

The one element of the film which didn't really work was the music, which most of the time was jaunty and jolly, but would swing suddenly to sinister to underline certain parts. And interestingly, in the Q&A afterwards, Shamir said that he wasn't entirely happy himself with how the music came out, and that if he could change one thing about the film, that's what he would do again. But in spite of that, what we actually see on the screen, and the attitudes and opinions expressed, make this a fascinating and worthy winner of the 2009 Grierson Award.

I agree with you that the one element of the film which didn't really work was the music. The music was really bad. I think No one liked this type of music.