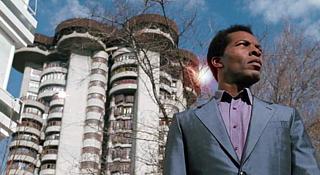 I keep telling people how good the LFF Catalogue is, but I’m still the only person I know who buys it every year. So: the LFF Catalogue. It’s good. Buy it now, £5 from the BFI Southbank bookstore, or eventually from their online shop. It's a book with a full page dedicated to each film showing in the Festival, apart from the ones scheduled after it went to press (yeah, White Stripes: Under Great White Northern Lights, I’m looking at you). Intended as a replacement for the programme notes traditionally handed out at BFI Southbank screenings, it has details of the key cast and crew members, a short biography of the director, and some notes on the film.

Aside from providing lots of background reference material for these reviews, occasionally the Catalogue will come up with an insight that you never previously considered, like this one from its biography of Jim Jarmusch: “There has been an essentially episodic aspect to his work… but one that stresses the strangest and most intriguing of connective tissues.” And they’re right, of course. Twenty years ago at my first LFF, I caught Jarmusch’s Mystery Train, a collection of three interweaving stories set in the same hotel: more recently, we've had Coffee And Cigarettes, which is eleven short films glued together. Even a more coherent work like Ghost Dog is divided into chapters by its quotes from Hagakure. But there comes a point where you can be too episodic for your own good, and Jarmusch has finally reached it with The Limits Of Control.

Its central character is referred to in the Catalogue cast list as Lone Man, and is played by Isaach de Bankolé, the most prominent of a number of Jarmusch regulars in the cast. He’s a man on a mission, although we’ll have to wait a very, very long time to find out what that mission is. Lone (can we call him Lone?) is only being told about it himself in bits and bobs: he wanders around a series of Spanish locations, he meets up with mysterious people who chat to him about anything that comes to mind, they swap matchboxes containing coded instructions, and then he moves on. Lone's contacts make up one of the most interesting supporting casts you'll see this year – Tilda Swinton, John Hurt, Gael Garcia Bernal and so on – but unfortunately, that’s the most interesting thing about them.

You know those scenes in old spy movies where two secret agents meet up and say things like “the weather in Moscow is unusually cold for the time of year?” Well, Jarmusch has made almost an entire movie out of those scenes. Which sounds like a fun idea on paper, but is dull as hell in practice. The film becomes a series of disconnected monologues by Lone's contacts, covering anything from their favourite films to the concept of molecules having a memory. But none of the ideas thrown out in these monologues resonate at any level other than 'things Jim Jarmusch has thought about recently'. There are attempts to fold all these references back into the main narrative, but they feel far too forced to be successful.

I was looking forward to seeing the work of genius cinematographer Chris Doyle in Control, but even that turns out to be a disappointment. It becomes apparent that Doyle’s strengths are in his combination of lighting and camera movement – and when Jarmusch frequently locks down the camera in one place, that’s half of Doyle's visual vocabulary removed right there. The Spanish locations look pretty enough, but they don’t come alive the way they do on Doyle’s other films. It's just one more disappointment in a film that's irritatingly full of them. 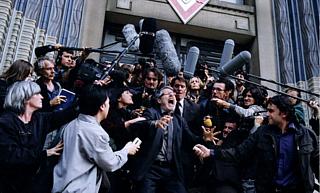 Celeb spot of the day: Aasif Mandvi, just before MICMACS, going into the gents at the Vue West End while carrying an open container of popcorn. Ewwwwwwwwww. Wasn't this the guy who was lecturing people about food safety in Today's Special? Anyway, moving on.

Bazil (Dany Boon) has had a tough life. As a child, he lost his father to a landmine: thirty years later, he became collateral damage in a street gunfight, and has to walk around with a bullet lodged dangerously in his brain. Homeless and without a job, he’s adopted by a group of people living in a secret lair under a junkheap, making good use of the things that they find. They’re a fun bunch, and Bazil quickly becomes friends with them. But when he discovers a) the location of the manufacturers of the landmine that killed his father, b) the location of the manufacturers of the bullet that nearly killed him, and c) that they live on opposite sides of the same street, his instinct for revenge takes over. He comes up with a complex plan to play them off against each other like a thermonuclear Yojimbo, and he’ll need the help of all his friends to pull it off.

I never quite bought into the sentimentality of Jean-Pierre Jeunet’s last two films (Amelie and A Very Long Engagement), fun though they were. For his new one, he’s put whimsy and Audrey Tautou to one side, and gone back to the anything-goes anarchy of Delicatessen, which is still my favourite film of his. (There’s a cute back-reference to Delicatessen in MICMACS if you keep your ears open.) Like that debut feature, this is more or less a live-action cartoon, with the war between Bazil and the arms dealers escalating to apocalyptic proportions. The use of recycled junk to fight that war gives the film the organic feel of those carefree days before CGI, even though you know deep down that many of the effects are digitally sourced one way or another.

As Amelie showed, Jeunet can make a film look like the jolliest thing in the world (we'll forget Alien Resurrection for now), but this time he includes some darker undercurrents. We’re not allowed to forget that Bazil could die at any moment: and also, we’re not allowed to forget that our villains, cartoony as they are, have real-life equivalents who are literally responsible for the death of millions. It’s a point that’s hammered home a little more forcefully in the climax - but Jeunet finds a neat way to ensure that even while we consider that, it doesn’t interrupt the fun to be had. 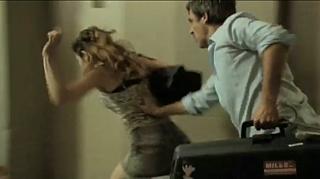 Every year, the LFF advertises for volunteer staff. Occasionally, I consider it – after all, it’s not like I’m doing anything else during those two weeks – but I’d imagine you don’t get to see much of the films in between the work, and I’m sure it’s a thankless job dealing with the general public. That isn’t meant to be a reference to Suze’s Hot Chocolate Incident, honestly: I’m thinking more of the old Argentinian couple complaining to the poor lass on the door after Castro. “It didn’t make any sense, it was just a lot of people running around,” they said. Which is why I could never be an LFF volunteer, because my response to that would have been “Yeah? And? So?”

It’s actually a little more than just a lot of people running around, but not much. Castro (Edgardo Castro) has left his wife Rebecca (Carla Crespo), and moved to Buenos Aires with Celia (Julia Martinez Rubio). Rebecca has taken this very badly indeed, and gathered a posse of associates and lovers to track him down. Castro’s life now consists of searching for a job, trying to keep Celia happy, and – yes! - running away from people. Luckily one of those people is on crutches, which isn’t terribly efficient but makes it more fun for those of us watching.

Alejo Moguillansky’s film is in the LFF’s Experimenta section, and despite the objections of that old couple I don’t really see it as being that experimental. You could argue that the motivations behind the chase are left deliberately vague, but I’d see that as just adding to the absurdist humour that runs all the way through the film. There are hilarious verbal setpieces (Castro’s job interviews in particular) that gain all their comedy from being played at high speed while making very little sense. The same applies to the physical action, too. When Castro eventually does find a job, it’s one that involves a couple of dozen people rapidly passing parcels between each other: a setup that leads to the single best car chase I’ve ever seen in a Samuel Beckett adaptation.

I probably should have mentioned that earlier, really. Moguillansky claims in the end titles that portions of his film have been freely adapted from Beckett’s early novel Murphy. A quick wikiskim suggests that Moguillansky’s used one or two of the characters, and the idea of the protagonist being continually on the run. But he’s hyped them up to such a degree that it feels like roughly two-thirds of the film consists of pursuit sequences. Those sequences are inventively filmed, sometimes with the freneticism of the best action cinema, sometimes with choreographed precision: the scene where three people stalk Celia, using umbrellas to signal to each other, is more like a large-scale piece of contemporary dance than a chase.

Experimental movies, quite frankly, are rarely this much fun, which makes it a shame that Castro can't sustain its pace for the full 90 minutes. The dying fall of its climax (which I'm guessing comes from Beckett too) requires a shift in gear that the movie doesn't quite pull off. Mind you, that was just my reaction as I was watching it. Looking back on the film now after sleeping on it, I'd be really keen to see it a second time. The first viewing for the sheer kinetic rush, the second one to pick up the details. Then again, maybe I just enjoy movies that confuse old people.

If I was a volunteer they could being not just hot chocolate in, but any amount of alcohol as well (just as long as they bought me one).