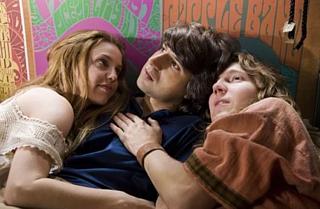 The first part of our overly Semitic programme for today is based on the book Taking Woodstock: A True Story Of A Riot, A Concert And A Life by Eliot Tiber. Renamed Elliot Teichberg in the film (and played by Demetri Martin), in the late Sixties he was a young man trying to make a name for himself as a designer. His parents Jake (Henry Goodman) and Sonia (Imelda Staunton) keep getting in the way of his plans, as he has to help them run their Catskills motel. He’s looking for a way to help drum up business for them: and when he hears that a proposed music festival is without a home, he uses his influence on the local town council to give the festival a site close to the motel. Which is how Woodstock ended up where it was.

I made a prediction back in June that this would be the latest of a long line of Ang Lee films to grace the LFF, and it’s nice to be proven right. It’s a strange little mixture of light comedy and shameless nostalgia trip, and just about works on both levels. Lee realises that pretty much all of our memories of Woodstock come from the Michael Wadleigh concert film, so he uses visual references from that all over the place: the mudslide, the peace-sign nuns, the Port-O-San toilets, all shot in convincingly grainy fashion with lots of split screens.

But the film really kicks off at the point where we suddenly realise Richie Havens can be heard playing Handsome Johnny – the festival’s opening number - way off in the distance. From that point on, Taking Woodstock follows the chronology of the Woodstock concert movie, but the festival is never centre frame: it’s all happening in the background, while we follow Elliot’s adventures on the festival site. It’s Rosencrantz And Guildenstern Are Stoned, if you like: a fascinating alternate angle on a familiar event.

James Schamus’ script is warmly funny, and well acted almost entirely throughout, with Imelda Staunton giving a show-stopping performance as Elliot’s stereotypically suffocating Jewish mother. If there is a weak spot, then unfortunately it’s Elliot, at least for me. Demetri Martin brings too much baggage along from his comedy work to be really convincing as an actor. His fellow Daily Show correspondent Aasif Mandvi didn’t have this problem in Today’s Special, which leads me to suspect Mandvi can actually act: whereas Martin is just coasting on his existing persona, which is a little too much Noughties Slacker to fit in with everyone else. Which is a shame, because it’s a fairly fundamental flaw in an otherwise fine film. But if you’re not aware of Martin’s other work, you may feel differently about that. 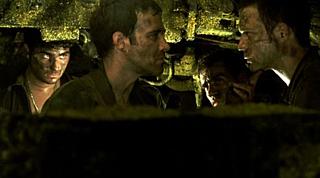 My third and final visit to the returns queue for this festival: and once again, it was a success. Mind you, I got in the queue immediately after coming out of Taking Woodstock, so I’d been standing at the front of it for an hour by the time tickets started to go on sale for Lebanon. This is another foreign film that’s sold out all its matinees, but on this occasion it’s easy to understand why: shortly after it was announced in the LFF programme, Lebanon won the Golden Lion at the Venice Film Festival. (The Belated Birthday Girl would like me to point out that she had this film on her shortlist long before the award, honestly.)

Lebanon is an arthouse movie with a killer high-concept pitch: it’s the story of the first day of the 1982 invasion of Lebanon, as seen entirely from the inside of an Israeli tank. Four soldiers are locked inside the tank, and we’re trapped in there along with them. All we see is what they see: the foetid interior of their vehicle, the destroyed cityscape visible through their gunsights, and four young men being sent out to blow things up and realising they don’t enjoy it very much.

Writer/director Samuel Moaz isn’t particularly concerned the rights and wrongs of the conflict. The closest he comes is in the depiction of the totally undisciplined nature of the Israeli soldiers: always bickering with each other, and never really knowing who they’re taking their orders from at any given time. What he’s really interested in is what happens to young men when they’re thrown into a war situation for the first time – and that doesn’t just apply to Israelis, it’s universal.

Which is why, when you get down to it, the plot of Lebanon isn’t all that strong: instead, it’s all about making you feel what it’s like to be stuck inside a tank for a day. The locked-down perspective plays a large part in recreating the experience, and so does the magnificent sound design, wrapping the audience in the mechanical sounds of the tank and the exploding world outside it. There are several extraordinary sequences shot entirely though the gunsights, accompanied by the repetitive grind of the turret as it rotates and the pok! sound of the viewer zooming in for a closer look. They have the curious dual effect of simultaneously distancing you from the carnage, while making you feel somehow responsible for it.

The main comparison point people reach for is Das Boot, and if you can imagine that film’s claustrophobia with a smaller cast and a much smaller set, you’re well on the way towards imagining what an extraordinary experience Lebanon is. Its you-are-there nature means it has to be seen on the big screen: hopefully the Venice award will make that possible for a wide audience. 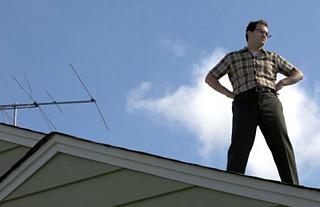 I’ve not done many big Gala screenings this year: aside from seeing George Clooney in the movie adaptation of b3ta.com (The Men Who Stare At Goatse), A Serious Man is the only other one I’ve booked for. And shortly after booking it, I started to regret it a little. Fifteen quid for a Gala screening that won’t have any famous people attending! After all, the cast is pretty much unknown, and it’s not like the Coen Brothers would be travelling to London to introduce it.

Well, I was wrong: the Coens were indeed here this evening, although they didn’t really say much, other than to introduce their star Michael Stuhlbarg. As the Galas are now split between two cinema screens, the LFF claims that post-Gala Q&A sessions are unworkable. But given that we had two directors, was it beyond the wit of the Festival staff to have Joel answering questions in screen 5 and Ethan doing the same in screen 7? I guess that isn’t the way the Coens work, sadly.

Anyway, onto the film: and in keeping with the day’s theme, this is the Jewiest Coens movie since, ooh, Barton Fink I’d imagine. Larry Gopnik (Stuhlbarg) is a physics professor whose life in 1960s America starts, very slowly, to fall apart. His wife suddenly announces that she’s leaving him for his unreasonably reasonable friend Sy. His son Danny is getting into trouble at school. His brother Arthur is getting into trouble everywhere else. And Larry’s attempts to get tenure at his university are being threatened by a campaign of persecution. Larry turns to his religion to give him comfort and show him where he’s going wrong. It won’t help.

You don’t have to be Jewish, but… but I suspect it’d help here. Being a Gentile won’t prevent you from enjoying the hell out of A Serious Man, though. The pre-credits sequence, a wholly (?) unconnected retelling of an old Yiddish ghost story, warns us that Larry isn’t just having a run of bad luck: there are much larger forces at work. What the Coens do here magnificently is play around with a story that’s been going around since the Book of Job, and play it all for comic effect. The more Larry suffers unjustly, the funnier it gets.

The comedy builds beautifully and uncontroversially as the film goes on. But it’s all ultimately heading towards one of those Coen endings that’ll cause howling in cinemas wherever it plays. As with the last time that happened (No Country For Old Men), it’s completely signposted from the beginning, and makes you realise that you’ve been looking at the film from the wrong perspective throughout. Let’s just say that fans of the Schrodinger’s Cat gedankenexperiment will be walking around with huge idiot grins on their faces for several days afterwards. I know I am. (We’ll talk about why I’m writing this several days afterwards in the next entry…)