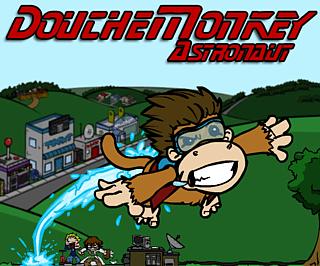 In the meantime, your Simian Substitute Site for November 2009 is Douche Monkey Astronaut. Inspired by the news that NASA are bombarding monkeys with radiation, I decided to look into the sordid history of the use of monkeys in space research. I have to admit, this one was new to me...

In the year 2007, a brilliant scientist lost some of his most important data as a result of the antics of a certain monkey. This data was lost out in the sky and beyond.

The only solution he could see was to send this monkey into orbit with a data collection mechanism to reclaim his precious information. But how to propel a monkey into space?

He decided that his only solution was to fill the monkey with enough douche water that the pressure would send him soaring into the heavens. He would become the first Douchemonkey Astronaut.

There's a debate to be had on which is worse: irradiating monkeys, or performing colonic irrigation on them as a means of jet propulsion. Of course, if you don't care about the debate, you could just play this very silly game instead. Otherwise, the comments box is open for anything you want to discuss, as ever. Although if you're going to use it to try and flog memory sticks, London holidays or Christmas gifts, my mate Bill has a message for you.

I have really enjoyed the coverage of Douche Monkey Astronaut show. The show is really interesting. Thanks for sharing such nice article here.

I heard your mum does it with sailors for money, zinc.

I'm not sure if you are suggesting colonic irrigation is a good idea for monkeys?
As it benefits almost every adult in the western world I would imagine it would also benefit our close relatives and would therefore be willing to help you if your monkeys want a treatment. Please make sure that if they are under sixteen that a parental consent form is signed.

I seriously appreciate this post. We need to have far more persons like you bringing value for the community