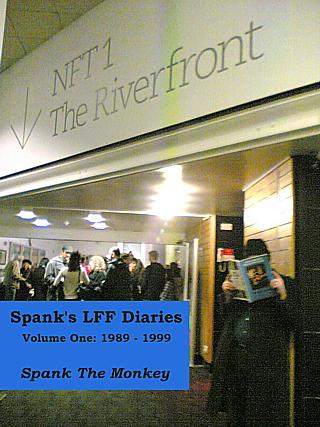 I've always been quite pleased with the Festival diaries on this site, for both Edinburgh and the London Film Festival. They're pumped out under a fair deal of pressure, and it always surprises me that they still hold up to re-reading after the event. With all the Spank Gold pieces I wrote last year to fill in the gaps, I've now got two whole decades of reviews I can draw on. So these were obvious candidates for collection into books.

As it turns out, there's far too much material from each Festival to fit comfortably into a single volume. In the case of the London Film Festival, I'm splitting it into three parts - everything up to and including 1999 in the first volume, and then the Noughties will be spread across the other two. (It'll be a two-volume split for Edinburgh, with pre-Noughties reviews in one book and the rest in the other.)

This one took a bit of work, actually. It's pleasing to hear that Suze thinks the chapters in Monkey Round The World work well in context with each other, given that they were written at various times over a couple of decades. But at least they were all written chronologically. (Technically, that includes the Hong Kong chapters for 1993 and 1997, which were largely drawn from my narration on the holiday videos I made at the time.) But with these LFF reviews, the first half of the book (covering 1989-1997) was written ten years after the second half (covering 1998-1999), and the two halves refer back to each other in all manner of self-contradictory ways.

So when it came to getting all this down on paper, one of the main editing tasks was to work through the book from beginning to end, making sure that it held together as a coherent narrative rather than a mishmash of random diary entries. And I think I've pulled it off, though it took the addition of 34 footnotes to do it. (It amuses me that several of those footnotes are references to books I haven't published yet.)

The other big editing job on the book - and one that still gives me a twinge of regret - was to remove all the Notes From Spank's Pals sections. The guest reviews from my mates have always been an entertaining part of the package (especially for me): but it strikes me that if I'm planning to make money out of this venture, I shouldn't be doing it with material other people have written just for fun. So in all the Spank's LFF Diaries books - and, of course, the Spank's Edinburgh Diaries that'll be coming soon - you'll only be getting my reviews. The ones by the Pals will always remain on the web, and each book will positively encourage the reader to check them out.

And if any of those contributions from the Pals subsequently turned up in a book called, taking an example purely at random, Suze Reviews, I'd have no objection to that whatsoever. (I'd probably end up being the first to buy a copy.) If any of you are thinking of following in my footsteps and trying to get something into print, my publishers Lulu are currently running a special offer where if you publish a new book with them before March 16th 2010, they'll print you a free copy. (Read the comments at that link carefully before jumping in, though: there seem to be some teething problems with making the offer work.)

Fuck it, I'm not proud. That one's going on the next cover.