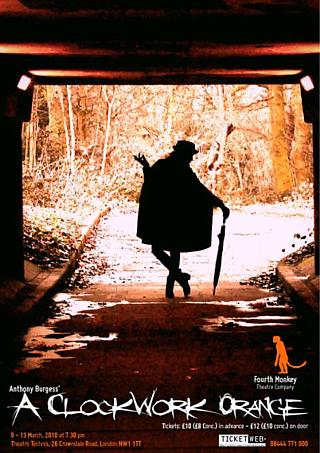 In the meantime, your Simian Substitute Site for March 2010 is Fourth Monkey Theatre Company. They're the youth wing of the Wise Monkey Theatre School in Muswell Hill, That London. The name comes from those three wise 'hear/see/speak no evil' monkeys that everyone knows about: FMTC claim that in fact, there was a fourth monkey called Shizaru, whose brief was to 'do nothing other than good.' Which struck me as bollocks when I read it, but it turns out that Shizaru is mentioned all over the place on the web, so either I'm just plain ignorant or we've come across the most convincing fake Wikipedia entry ever.

Fourth Monkey TC get a mention this month because they've got a new production: an adaptation of Anthony Burgess' A Clockwork Orange, running at Theatro Technis in Camden on March 9th-13th. It takes a lot of nerve to redo such an iconic story, but it looks like they're willing to take some serious risks with it - for a start, if their Twatfeed is to be believed, they're going to ignore the common assumption that Alex is a boy's name. Book through TicketWeb now, or do what I'm doing and hold out for their Edinburgh Fringe run in August.

Everyone else calls it a Twatfeed, don't they? Feel free to disagree with me on that (or anything else) in the comments.

Just have to say that the cover photos for your first two books have been really great but that the cover typography and text layout is a bit naff. Well it is a site of criticism :-) !

Yeah, that's me rumbled: no real design skills to speak of, but I've got a few interesting photos I can use for the book covers. Maybe I'll run a competition to see if any of my readers can design a better cover, those always work well.

Hi Spank. A belated thanks for the blog mention. Have a read of our Clockwork review http://tinyurl.com/y5gztdd Thanks, the Fourth Monkey.

can i get a monkey as a pet in North America?
if i can get it from some asia countries, will there be anyproblem to
bring it back to canada?

The possession of monkeys as pets is prohibited by law throughout North America and Canada. Your IP address 74.55.186.180 has been logged, and the relevant authorities have been notified.