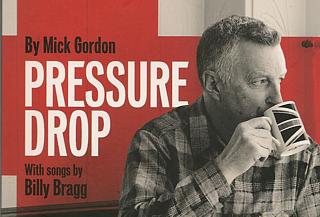 The gig part of Pressure Drop is Billy Bragg’s department, and it's made him the public face of this project. He’s contributed half a dozen new songs, and performs them as linking material between the scenes written by Mick Gordon. They follow three generations of a family in the 24 traumatic hours leading up to a funeral. Grandparents Nana and Ron (June Watson and Pip Donaghy), who’ve seen some huge changes in their lifetime and have coped with them to differing degrees. Brothers Jack (Michael Gould) and Jon (Justin Salinger): one stayed in England to raise a family, the other ran off to America under a cloud. And there’s young George (Shea Davis), always at odds with Jack and mother Jacqui (Susan Vidler), and starting to question the old certainties around him.

Four out of six of Spank’s Pals confessed afterwards that the funeral setting got them a bit choked up, bringing back memories of similar occasions in their lives - sod it, I mean our lives. And as a play, this works best when it’s operating at that sort of primal emotional level. There’s a smart theatrical device used in the chapel scenes that causes an audible gasp from the audience when it’s first revealed, but is used carefully to ensure that it never gets tired. As a depiction of a family trying to keep together in the wake of external pressures, it has some wonderfully judged moments.

But as has been hinted from the word go, Pressure Drop is specifically about the pressures that the white working class are feeling today, which means that it has to address the issue of race. It does this mainly through the two additional characters from outside the family, longtime friend Tony (David Kennedy) and his son Barney (Craig Dowding). Tony, in particular, is the one pushing for Jack to run for local election, without anyone saying out loud which party he’d be running for. It’s Tony who has to put the case for why he feels the extreme right has the solution, and he’s made scarily persuasive – most notably in one terrific racist gag about Indian call centres (too good to spoil here) that makes you laugh and feel guilty all at the same time. Jon, the outsider coming back after years away, is put in the position of having to argue against him.

Unfortunately, it’s in these sections that Gordon’s writing occasionally goes off the rails – simply because it stops sounding like real people talking and turns into simple polemic. (Generally, he has an effective ear for the digressions and doubling-back of real speech: I had to check in the published text afterwards to make sure it wasn’t just the actors going off-script.) Every so often, there’s a clunky bit of Author’s Message that pulls you out of the dramatic flow of the piece: and without giving names away, some of the cast are better at dealing with those bits than others.

There’s a more fundamental problem with the flow of the play, and it’s to do with that gig/play/installation structure I mentioned at the start. What that actually means is that there are four small stages spread across the huge ground floor gallery at the Wellcome, representing a living room, a chapel, a pub, and the stage where Bragg and his band are performing. Aside from some great new songs in his more thoughtful register, Bragg takes on an additional role as ringmaster-cum-traffic cop, directing us from one stage to the next while trying to keep us mindful of issues of health and safety. He does it in his usual warm and persuasive fashion, but he’s doing it from outside the world of the play, and he becomes part of the distraction that stops the drama flowing from one scene to the next, before you even factor in the walk between the stages. The best promenade productions (like those of, say, Punchdrunk) allow the audience to get up close to such an extent that there’s a risk of you being dragged in – here, there’s always a physical distance between the audience and the play, and that translates into an emotional one.

When Pressure Drop’s allowed to stand still and build up a head of steam – most notably in the central pub scene where the confrontation between Tony and Jon kicks off – it starts to achieve some of the things you can imagine Gordon was aiming for. But all too soon we’re being nudged off by Bragg to the other end of the room for the next bit, and the momentum gets lost. A story like this one needs that momentum to stop the moments of melodrama from swamping the piece completely. And although the play avoids melodrama to an admirable degree, eventually we reach the scene where a teenage boy discovers a knife, and we can take a damn good guess at where it's all going from there.

It’s tantalisingly close to being good, but other recent London shows have done better with Pressure Drop's raw materials. Seapea suggested that the current pub theatre version of La Boheme at the Cock Tavern in Kilburn showed a smaller-scale (and ultimately better approach) to using multiple performance areas in the same building. Meanwhile, The Belated Birthday Girl felt it suffered in comparison against the National Theatre’s wilfully misunderstood production of last year, England People Very Nice. That one made the unfashionable point that English racism is a continually evolving process, with each generation of immigrants gradually becoming assimilated into the whole so that they can hate the next generation of immigrants as much as the rest of us.

Pressure Drop is a little too desperate not to cause offence to risk a viewpoint like that. It thinks it’s enough to note that the white working class of England feel under threat, but it isn’t prepared to analyse the nature of that threat to any real degree. If the English are so worried about immigrants taking their jobs, why aren’t they blaming the bosses who are hiring cheap foreign labour in the first place? A little more pushing like that might take Pressure Drop out of the realm of preaching to the converted. But then, holding your play in an art gallery probably guarantees you’re preaching to the converted anyway...